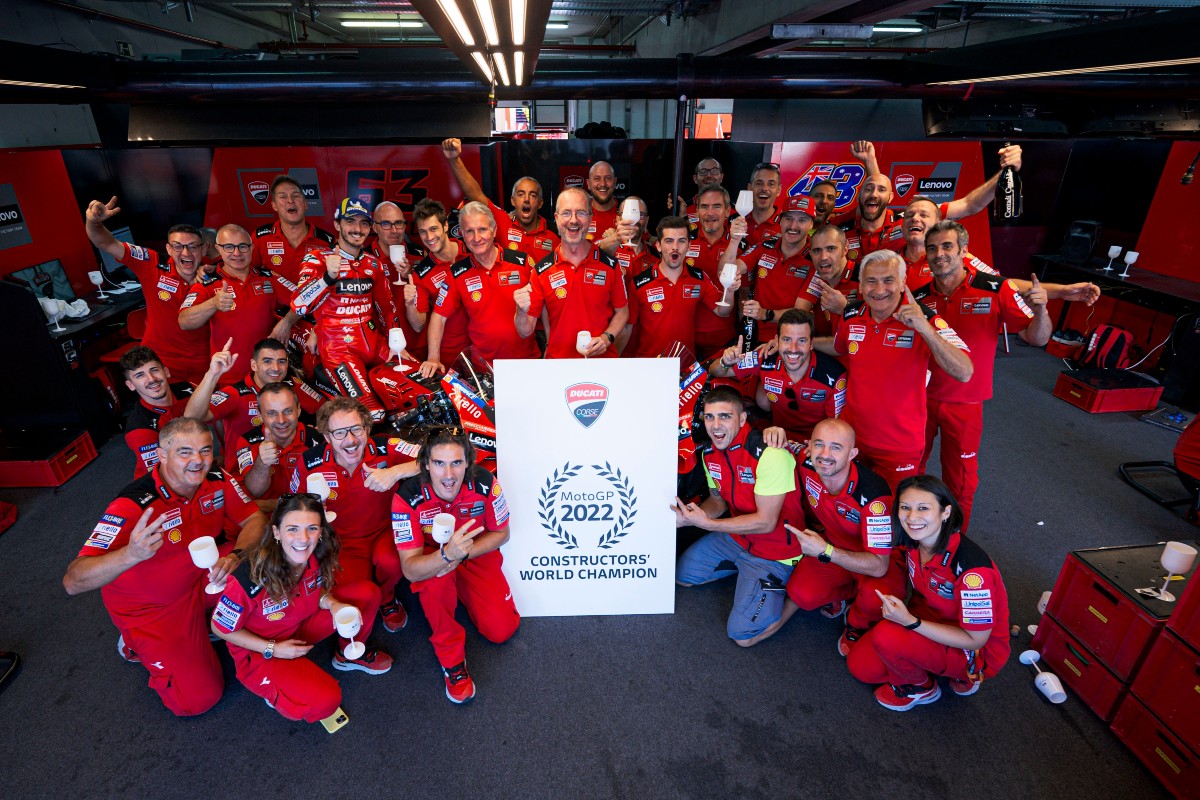 Ducati secured the MotoGP Constructors’ World title for the third consecutive year today. It’s the fourth World Title for the Borgo Panigale-based manufacturer in the premier class, clinched five races ahead of the end of the Championship.

Among the riders who have contributed to this achievement, with six victories in 2022, is undoubtedly Pecco Bagnaia, who finished second in the Aragon GP. Starting from pole position, the Ducati Lenovo Team rider got off to a good start, immediately taking the lead. After an initial exchange of positions with Bastianini, Pecco remained in first place until the last lap, when the fellow Ducati rider overtook him to secure the victory by just 42 thousandths. Thanks to today’s second place and following Quartararo’s crash on the first lap, Bagnaia brings his gap from the French rider to just 10 points.

On the other hand, Jack Miller finished the race in fifth place. Starting with the second fastest time, the Australian rider had managed to put himself immediately behind his teammate after the start, but in the following laps, he was passed first by Bastianini and then by Brad Binder and Aleix Espargaro to eventually finish the race in fifth place. Jack now occupies fifth place in the overall standings, while the Ducati Lenovo Team leads the team classification, 37 points ahead of the second-placed team.

I’m thrilled with today’s result. Enea and I had a great race! I knew he would be very fast in the final laps, and when he passed me, I preferred not to make any move on him. I tried to win and waited for a safe opportunity to pass him, which in the end wasn’t there. I knew these 20 points were important, and I preferred not to risk it. Now we must stay focused and think about the next race in Japan next week.

Aragon has never been a favourable track for me, so I’m quite satisfied with fifth place. After I got passed by Binder and Aleix Espargaro, I continued to have a pretty consistent pace, but it didn’t allow me to get close enough to try and pass them, and towards the end, I also started to suffer with the front. In any case, I am happy, and I can’t wait to get back on track next week at Motegi.

We are happy to have gotten our third consecutive Constructors’ World Title, the fourth in Ducati’s history in MotoGP. It is a result that we expected, given the results obtained by our riders this year, including the six victories of Bagnaia and the four wins of Bastianini. I want to thank all our riders and all the Ducati Corse staff, whose commitment and dedication have allowed us to reach this goal again. Now we can focus exclusively on the riders’ title: we are 10 points from the top of the standings, and with five races remaining, the fight in the Championship is open more than ever.

The Ducati Lenovo Team riders will be back on track in less than a week for the Japanese GP, scheduled for 23rd – 25th September at the Motegi circuit.