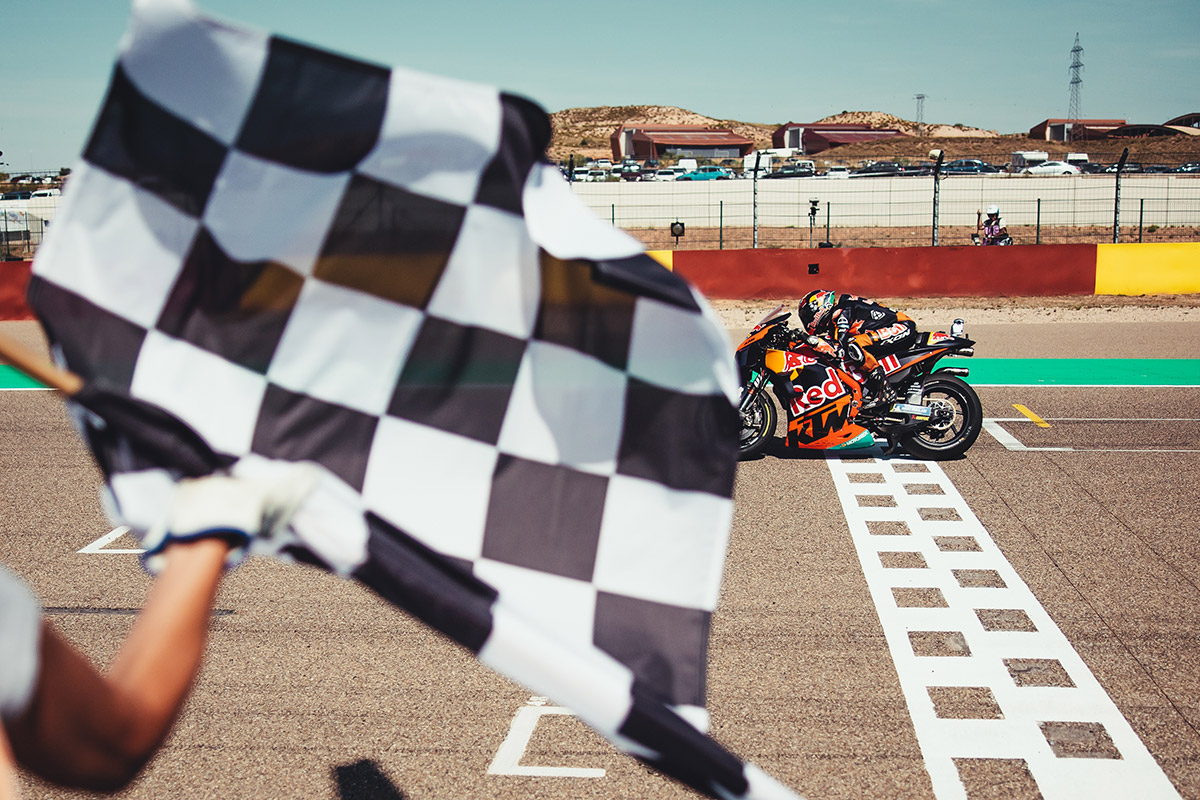 Brad Binder raced to 4th position and his second-best finish of the current MotoGP season at MotorLand Aragon today. The Red Bull KTM Factory Racing rider made a brilliant start and remained in podium contention for the entire duration of the fifteenth round of twenty and the penultimate European Grand Prix of the campaign.

MotoGP moved from the San Marino Grand Prix and a subsequent two-day test at Misano straight to Spain and the sprawling, technical blend of 17 corners at MotorLand Aragon. The circuit first entertained MotoGP in 2010 and as well as being a long, diverse and undulating course the asphalt is also slick and aged. Tire consumption was high, adding an element of strategic endurance to the 23-lap race distance and not assisted by the decent late summer temperatures in eastern Spain.

Brad Binder began the Grand Prix race from the peak of the fourth row of the grid and seared into 2nd around the tight opening turns. From that point the South African, who was nursing a sore right ankle after his fall in FP3 on Saturday, was fast, competitive and error-free as he held 3rd position. With two laps remaining Binder succumbed to pressure from Aleix Espargaro and on the charge to the line missed his second rostrum by just 0.2 of a second.

Teammate Miguel Oliveira was scouring the fringe of the top ten in the opening stages of the race but rear end traction issues limited his potential and he rode proactively to bring the KTM RC16 to the line in 11th.

For the first time since 2019, MotoGP will again thrill Japanese fans as Mobility Resort Motegi gets ready to stage the world championship. The race is set to run on September 25th.

Brad Binder:
“All-in-all I’m happy to walk away with 4th today. I gave everything I had in the race and the bike was working the best it had been all weekend again, so hats-off to the team for a fantastic job. I think we had a pretty good weekend here. Unfortunately, the crash in FP3 set me back a bit with my ankle but I was able to put it aside today and fight my way forward. I had an amazing start and was in the top three the whole race, so it was a bit disappointing to lose the podium with two laps to go but it wasn’t to be today. We have a little bit of work to do to make that last step and fight for podiums again.”

Miguel Oliveira:
“Not the result we wanted because we were fast and competitive all weekend but the wear on the rear tire was unexpected today. I was in trouble at the beginning of the race and cannot find any reason why. I already had a difficult start when another rider lunged at me in Turn 15 and I had to run off the track. So, it was a decent enough weekend but we could not capitalize with the result. We’ll have another go next weekend.”