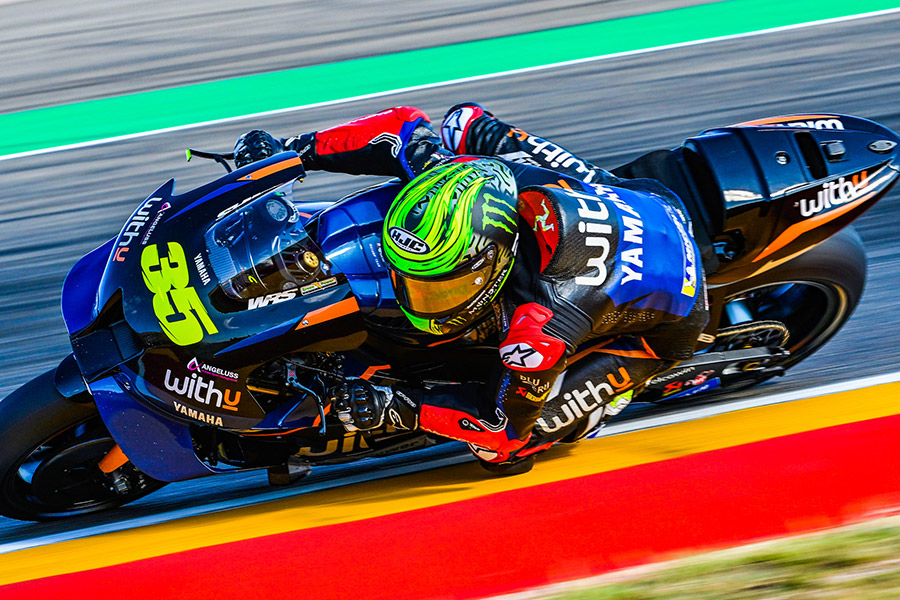 This weekend saw Cal Crutchlow returning to competition in place of Andrea Dovizioso in the WithU Yamaha RNF MotoGP Team. The Yamaha test rider showed some decent speed right from the beginning and did a strong race at sunny Motorland Aragon today. Starting from P19 on the grid, the Brit made up three positions already in sector one and jumped up to P12 by the end of the first lap.

Although Crutchlow could keep a decent pace throughout all 23 laps of the race, he had some decent fights, but lost a few positions from around halfway through the race. Yet, he kept his head down and eventually crossed the line in P14, bringing home two points in the MotoGP World Championship, finishing the race as the best Yamaha rider on the grid.

Meanwhile, premier class rookie Darryn Binder, launched off from P23 and was in 18th quickly, but had to avoid another rider crashing, which made him lose some ground on the first lap. He came back inside the points scoring positions and was fighting hard to keep his speed. Yet, he had a few competitors passing him, but could eventually keep up to see the chequered flag in P18.

In just a few days’ time the entire MotoGP circus including the WithU Yamaha RNF MotoGP Team is flying over to Japan for the start of a four-rounds overseas trip.

“First of all, it’s nice to get back into racing and finish the race. I was not expecting much, I knew I was confident in my pace and I could do a good job this weekend. The team are happy and overall I’m happy. I try my best, we know it’s not a great track for Yamaha, I never really had the ammunition to be able to fight but I try to fight. Over the weekend, you change your mindset to be able to see people in front of you and you want to pass them. Overall, we’re happy to come away from this first one after a year of not racing.”

“The first lap was a little crazy with all the crashes, unfortunately Takaaki’s (Nakagami) bike was quite in the track and I got caught up on the wrong side of it and it cost me a little bit of time on the first lap. But after that, I had quite a good couple of laps chasing Pol (Espargaro) and then when the first little drop of the tyre came, I struggled to adapt to it but towards the end of the race I managed to kind of keep the same pace throughout and catch back up with Fabio (di Giannantonio) in the last lap. I feel like we’ve made a good step forward compared to Misano, and today I think the things we tried during the test had a little positives. I’m just glad to see the flag and happy with how the race went. I’m looking forward to try and keep improving and hopefully I can be among the points in Motegi.”