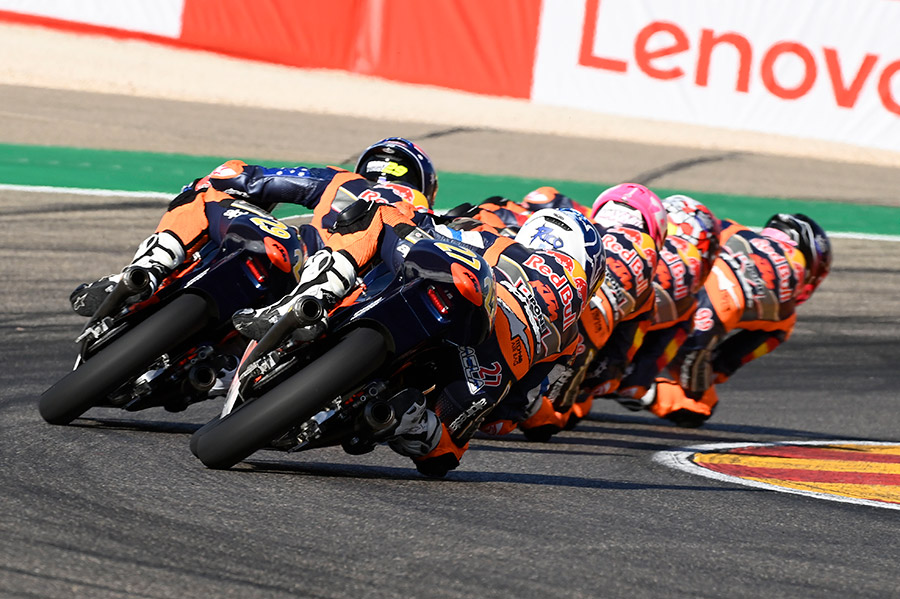 Every racing thrill imaginable was packed into 15 laps of Red Bull MotoGP Rookies Cup action at Aragón on Saturday with the top 4 split by 6 hundredths of a second at the finish.

Cup leader José Rueda led fellow Spaniard Màx Quiles towards the line but both were passed in the final metres by 14-year-old Fin Rico Salmela who took the win. He had Dutchman Collin Veijer in his slipstream but the 17-year-old was not close enough to make the podium.

A single second covered the pack of KTM RC 250 Rs down to P9.

“Today was just incredible. After I crashed in Qualifying yesterday I was angry with myself and that made me so determined in the race.”
“I said to myself, ‘Today is the day.’ At the start of the race I made up a few positions and I was like, P8, P9. I stayed there.”
“When I saw that there were 5 laps to go I started to push a bit more to the front.”
“Then on the last lap it was incredible, I made a beautiful overtake into turn 1. I was so happy about that. That set up the end of the race, gave me a good position and going into the last corner I thought, ‘well if I get a good exit I can still win’ and I did it.”
“Today I felt very good on the bike and I will not change anything for tomorrow, I will fight as much as I can to win again tomorrow.”

“There was so much overtaking, too much,” stated the 16-year-old Cup leader with his broad smile. “This was crazy.”
“I tried to get away but with this bike it is difficult, no way to get away.”
“The last lap was very difficult but finally I could get second on the line and these points are very important for the championship.”
“For tomorrow I will change something…… but no, I’m not going to tell you what I will change,” again the huge grin.

Quiles 3rd and determined to learn from that

“It was a good race, I am a bit angry that I didn’t get the win,” admitted the 14-year-old. “I was so close. But this makes me learn more for next time and tomorrow I will try to win.”
“On the last lap I almost went on the green, I had to back off and I think that probably cost me the win, quite a lot of time.”
“I have to improve for the next time.”
“The biggest moment was earlier though, when the back stepped right out, I though I was going to crash, it stopped, then went again. She was dancing under me, that was big.”
“The bike was great, very slippery but it was hot and the same for everyone.”

Veijer did everything possible on his way to P4

“Not bad, I was not fully expecting the race to go like this, I thought it would be really more difficult. Finally in the race I was running around P5, P4. At one point I got the lead, tried to pull away. I got a 0.6 lead but on the back straight they caught me again. That was a bit disappointing but it is what it is, I have to deal with it.”
“Overall the race was all right, I’m not completely happy with the result, I think I could have done much better. Finally P4, some good points and I am looking forward to tomorrow, the bike was great, nothing to change.”

Tatchakorn Buasri loses at final turn and is 6th

“It was not good yesterday in Qualifying, I was only P15 and that made it difficult today. It was many many laps before I got to the front,” explained the 21-year-old Thai.
“Then I stayed in the front group, managed the power, tyres, everything. I was watching everybody, how they are riding, what I need to do.”
“I made a mistake in the last lap though, at the last corner. I saw many riders go inside so I went outside to get a good exit. But I was looking, looking to turn back inside to get the drive but there was always someone there and I had not chance.”

Harrison Voight so close but 9th

“I made a bad start and of course when you lose positions like that it’s going to be tough,” explained the 15-year-old Australian. “I really tried to fight and gain positions back.”
“I struggled a lot in the last sector since I’m big compared to the little guys. This made a big difference down the straights. I was really trying to focus on improving the exit and setting it up to try and stay as close as I could but there was a lt of fighting.”
“Maybe we’ll go for the shorter gearing tomorrow, I’ll think about it. That might help me a bit more on the exits.”