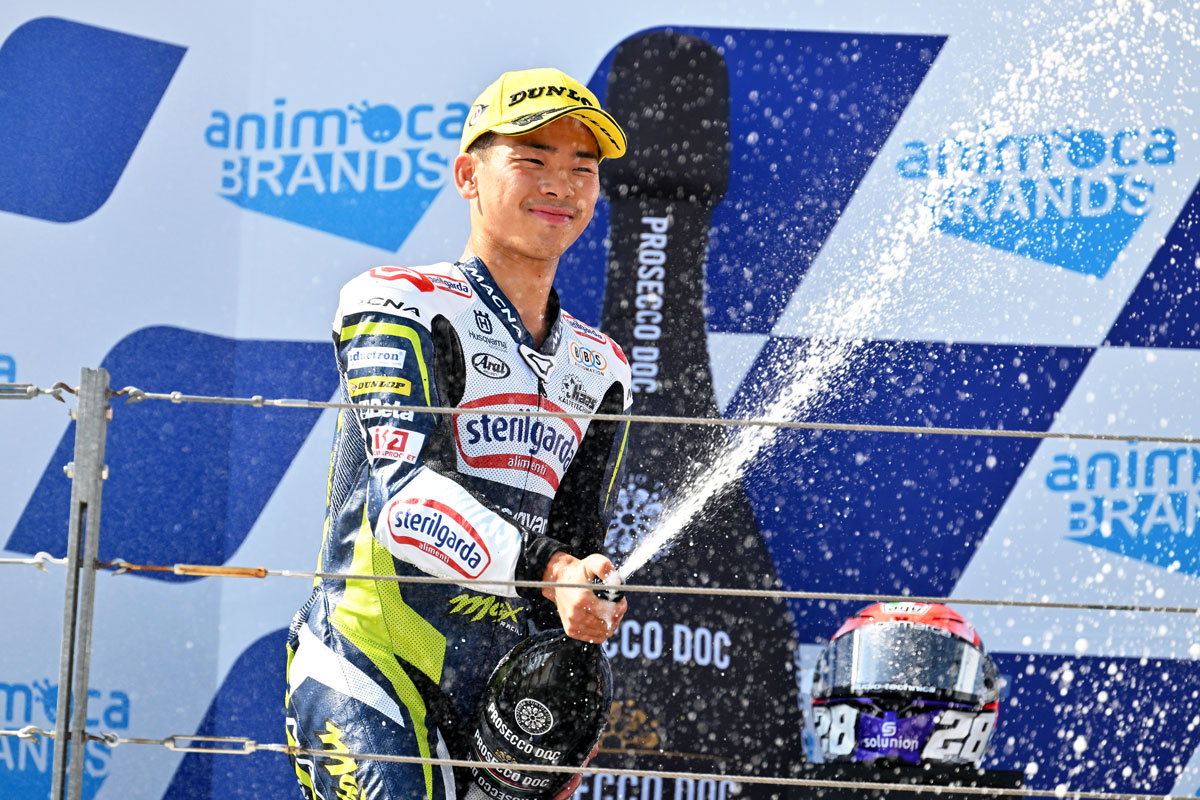 The start of Ayumu Sasaki at Aragon today was quite strong, so much so that on the end of the first lap Ayumu kept his position. Soon a first group of three drivers was created, in which Ayumu was always present, a group that showed an incredible step right from the start. In fact already on the second lap all three got their best lap and in particular, on that occasion, the Japanese rider got the second fastest lap of the race, with a time of 1’57.967. Ayumu kept a very high pace throughout the race and never left the second position.

With three laps to go the group was reduced to just two riders, with Ayumu in the chasing position. In the last lap Ayumu lost a few tenth, crossing the finish line in second position. After the zero of the last race, the twenty points earned are fundamental for the world ranking of Ayumu, so this second place today is worth a lot.

AYUMU SASAKI :
“I am happy about today, because I think we gave the maximum, finishing in P2, even though I was expecting to fight for the win. I need to work a little bit more at the points where we lose something. The next race will be in my home grand prix. We need to improve, so we will work to do this and try to fight for the win in Japan.”

John McPhee was fast from the start at today’s Aragon GP, leading the group of pursuers, in fourth position. On the third lap he had an excellent 1’58.111, which was the sixth fastest lap in the race and although the gap between the first three laps increased considerably, he continued to lead the group of pursuers until the sixth lap.

Unfortunately during the seventh lap he encountered gear problems and this caused him to lose about two seconds, causing him to slide into twelfth position. John continued to fight for the rest of the race, managing to cross the finish line in tenth position. For John it is the fourth consecutive race in which he manages to earn points. The Scottish rider is eighteenth in the world ranking.

JOHN MCPHEE :
“It was unfortunate having had some problems in the race. I felt very strong and managed to reach the front of the second group. I think the front three guys, being very fast from the beginning and having gained a large gap it would have been difficult to catch them, but I felt strong enough to at least stretch the second group or at least pull away some riders. Unfortunately, at that moment the bike did not change gear and I lost a lot of positions. I was able to recover quite well, but with only three laps to go, when I arrived at the front it happened again. This was unfortunate, because I was not able to be there on the last lap. Like I said, I felt very strong and through the whole race I was able to pass the other pilots without too much difficulties. From my side I can be positive about this and take this speed and momentum to the next weekend.”