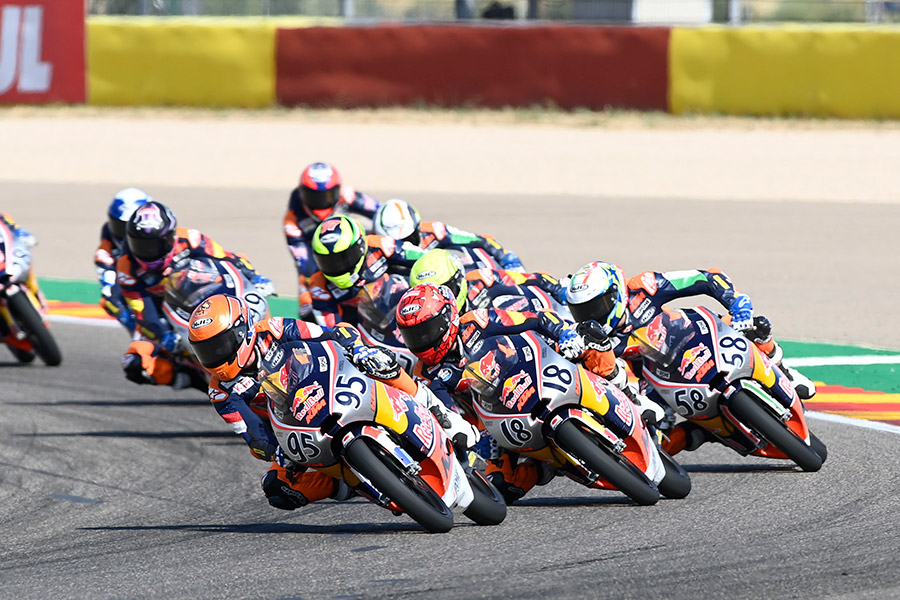 A sensational victory for lanky Dutchman Collin Veijer in the Red Bull MotoGP Rookies Cup Race 2 at Aragón. The 17-year-old crawled under the paintwork of his KTM and just managed to better spaniards Màx Quiles and Angel Piqueras through the final corner and on the run to the line.

Crucially, points leader José Rueda, the 16-year-old Spaniard, flashed across the line 6th, just 0.183 seconds behind Veijer. That narrow margin though represents 15 points. So now Rueda is just 11 ahead going into the last 2 races in Valencia at the beginning of November where 50 points are still up for grabs.

It was another fabulous race, half a second covered the top 9, 3 seconds the top 13. Saturday’s winner Rico Salmela, the 14-year-old Fin, slid off unhurt on the final lap and Veijer is now tied with Rueda on 3 wins for the season. Each has only been outside the top 6 once.

Veijer the rider of the weekend

“That was…. I don’t know….a difficult race again. I tried to manage to stay in front. Also I pushed to try and make a little bit more of a gap than I did yesterday so they couldn’t pass me on the straight.”
“On the last lap Piqueras passed me. I tried to slow the group a bit so there would be a little gap and then planned to close it through turn 15 to pick up his slipstream down the back straight for the last time.”
“Then I saw he went over track limits so realised that I didn’t have to finish in front of him to win the race.”
“I tried to stay behind and then on the last corner Máximo tried to overtake me so I released the brakes a bit, went a bit wide. Then thought, ‘oh, so it’s also possible to go around the outside of Piqueras!’
“So I went for it, I tried to keep on the throttle, a lot of sliding but managed to keep inside the track limit and wow! I won the race on my own even without a penalty on Piqueras. So I am really happy with this victory.”

“It was a very tough race, a lot of overtakes. I didn’t have it so clear, I was in the group and I did not feel enough power with the bike to do what I wanted.”
“I was struggling a lot but in the last 2 laps I pushed as hard as I could and I started to overtake.”
“In the last lap I had very good positioning and in the last corner I overtook Collin but he didn’t let me pass and the two of us were side by side and then he just got ahead at the line. It was a great race, I’m very happy.”

Piqueras on the podium

“I am very happy with the podium because this weekend I did not feel comfortable on the bike, it was a bit of a struggle. We changed a few details after yesterday’s race but it only made a slight improvement.”
“So to get on the podium is very good and I have to say thank you to the staff for all the hard work. Valencia is a track I know very well so I think I can do a good job there.”

“I’m happy but not super happy, just 0.004 from the podium, that is hard,” smiled the 16-year-old Italian.
“That’s a little bit frustrating but I am super happy about all the weekend, always competitive, in the top 4 or 5 in all the sessions. I thank everyone involved and I can’t wait for Valencia.”

Filippo Farioli a 10th from the win

“I am very happy, it was a difficult race,” explained the 17-year-old Italian. “The track was hotter, I found more grip but late in the race the grip dropped off a lot and became super slippery and it was difficult to stay on the track. I was over track limits but managed not to get a long lap penalty, so that was good.”
“In the last 2 laps I got passed a lot on the straight but in the end I made a good race, I didn’t crash like yesterday so this is better. We will see in Valencia if it is possible to do even better.”

Rueda a touch off

“I think I was a bit unlucky in the last lap, there were so many overtakes on the last lap. I tried to get into the right position and I pushed to the maximum in the last corner but I touched Lunetta and that cost me a few positions.”
“In the end I changed nothing on the bike, after yesterday I thought about it but I didn’t, it was good. Now I am looking forward to Valencia, it’s a track that I like so I am happy that the season ends there.”

“It’s been two good races but a little bit annoying because both races this weekend I am battling at the front but I can’t convert that to a podium,” stated the 15-year-old Irishman. “A bit of bad luck perhaps, not being in the right place on the last lap, people passing me and I get off line. It’s just racing, got deal with it and do better in Valencia.”