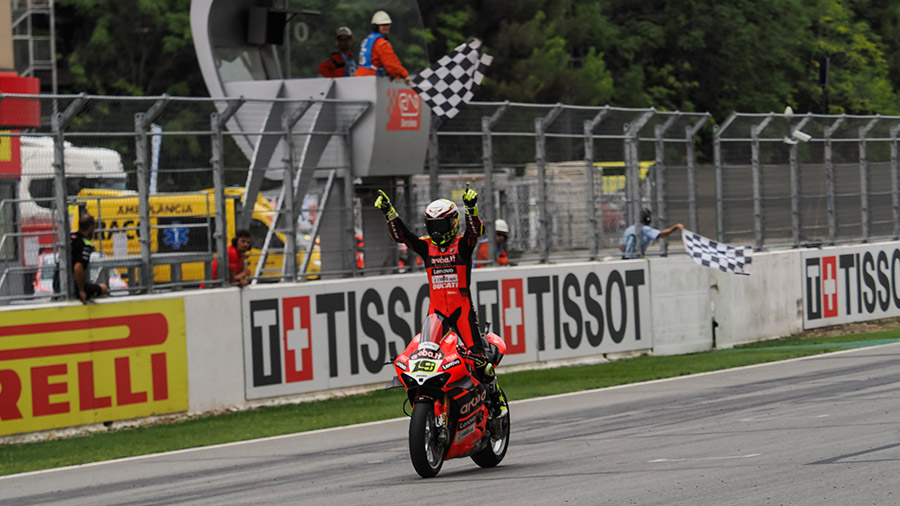 Race 1 for the MOTUL FIM Superbike World Championship was a stunning affair at the Circuit de Barcelona-Catalunya for the Catalunya Round with all three in the title race having to make stunning fightback. Alvaro Bautista (Aruba.it Racing – Ducati) extended his Championship lead with victory as he moved from fifth to first, Jonathan Rea (Kawasaki Racing Team WorldSBK) battled from losing out at the start to take second while Toprak Razgatlioglu (Pata Yamaha with Brixx WorldSBK) went from eighth to second at the start before dropping back.

After missing out on front row starts in the Tissot Superpole session, both Bautista and Razgatlioglu were able to move to the head of the field before Turn 1, with Bautista jumping from fifth to first while Razgatlioglu went from eighth to second. In the early stages of the race, Razgatlioglu looked to make a move on Bautista but the Championship leader was able to hold on to claim a relatively pressure-free victory ahead of Rea. Six-time Champion Rea was able to battle back up to second place after dropping down to fight in the opening laps of the race ahead of Garrett Gerloff (GYTR GRT Yamaha WorldSBK Team) in third, who started from sixth place and showed strong pace throughout the race to take the best result of his 2022 campaign and his first podium.

As the race progressed, Razgatlioglu lost ground to Bautista before losing out to the riders behind him, with Razgatlioglu being passed by Rea, Gerloff and Michael Ruben Rinaldi (Aruba.it Racing – Ducati) to claim fifth place at the end of the race, finishing 2.785s seconds behind Rinaldi despite the Italian only passing him at Turn 10 on the penultimate lap of the race.

The winning margin of 8.665s meant Bautista took his 25th win in WorldSBK, only one behind 2021 Champion Razgatlioglu, and his ninth win of the season with his Championship lead up from 30 points to 44. Bautista became the first rider to start fifth or lower and lead all laps in a race since Rea did, from ninth, at Jerez Race 2 in 2017. It was also Ducati’s 385th win in WorldSBK and the 680th race on the podium. Gerloff’s second place took his sixth career podium and his first podium since Donington Park Race 2 in 2021, with a span of more than a year between podiums. It was also Yamaha’s 325th race on the WorldSBK podium.

Rinaldi finished in fourth place, just 1.494s away from Gerloff in third place despite starting from tenth and running wide in the early stages of the race. Rinaldi has now secured ten top-seven finishes in the last 11 races including five inside the top-four as he leads the battle for fourth in the Championship. Razgatlioglu was fifth and his streak of leading races came to an end at 17 races, while the reigning Champion had to fend off a late charge from Iker Lecuona (Team HRC). Lecuona started from pole position but opted to use Pirelli’s SC0 tyre, inspired by Rinaldi’s victory in Race 2 in 2021. Lecuona dropped down at the start of the race but was able to stabilise his pace to finish in sixth place.

Alex Lowes (Kawasaki Racing Team WorldSBK) was another who initially fought in the lead group but dropped down in the latter stages as he claimed seventh place, ahead of Axel Bassani (Motocorsa Racing). Bassani, like Lecuona, used the SC0 tyre and had a strong start to the race but lost out as the race progressed, eventually finishing in eighth place. He was 15 seconds clear of Andrea Locatelli (Pata Yamaha with Brixx WorldSBK) at the end of the race, with Locatelli losing out in a battle with Rinaldi in the latter stages of the race. Irish rider Eugene Laverty (Bonovo Action BMW) was the lead BMW rider in the race as he took tenth place; his first top-ten finish since the opening race of the season, as he finished just three tenths behind Locatelli.

Laverty’s teammate, Loris Baz, was 11th and just 0.296s behind Laverty at the end of the 20-lap race, ahead of Xavi Vierge (Team HRC) in 12th place. Roberto Tamburini (Yamaha Motoxracing WorldSBK Team) took 13th place ahead of Lucas Mahias (Kawasaki Puccetti Racing) in 14th and Christophe Ponsson (Gil Motor Sport-Yamaha) rounding out the points-paying positions; Ponsson’s first points since the Tissot Superpole Race at the Circuito Estoril in May.

There were three retirements in the opening stages of the 20-lap race, with Phillip Oettl (Team Goeleven) retiring after suffering a technical issue on the opening lap. On the same lap, Luca Bernardi (BARNI Spark Racing Team) crashed at Turn 3 after contact with Michael van der Mark (BMW Motorrad WorldSBK Team), with Bernardi re-joining the race, before bringing his bike back to the pits, and van der Mark continuing. The incident will be investigated by the FIM WorldSBK Stewards after the race. On Lap 3, Scott Redding (BMW Motorrad WorldSBK Team) crashed at Lap 1 which put the British rider out of the race. Van der Mark retired from the race after a technical issue on Lap 9 of 20.

#CATWorldSBK
Get All Our Latest News Sent Direct To Your Inbox
Join 30,292 other subscribers.
Follow on Social Media
Get the VROOM Podcast