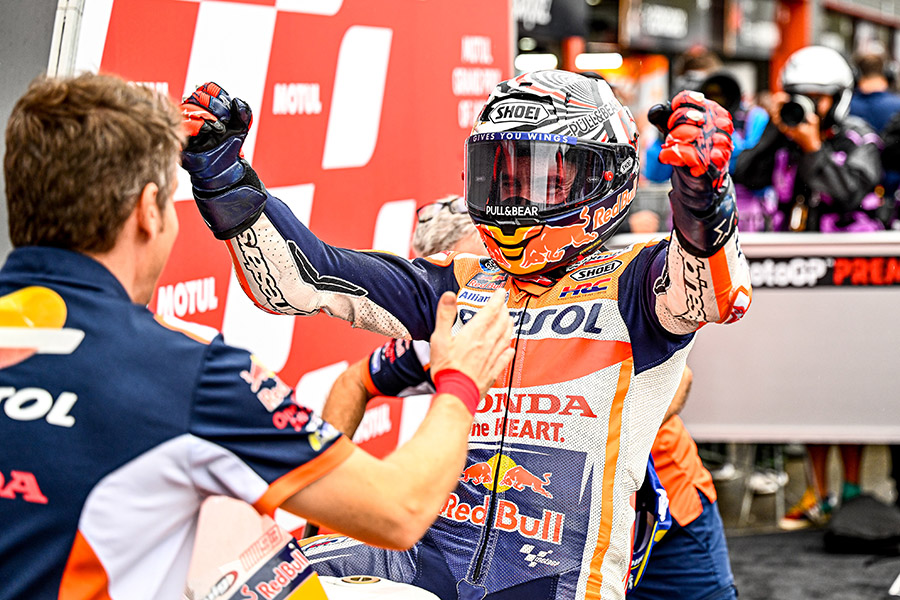 1071 days is a little less than three years; it’s 50 MotoGP™ races and 25 starts for Marc Marquez (Repsol Honda Team). It’s also the time that’s passed since the eight-time World Champion started from pole and what a stage to do it on: the very same Mobility Resort Motegi. After a tough, tough run for Honda, the number 93 gave the factory plenty of reasons to smile on home turf as he danced through the rain to head the grid with a couple of tenths in hand. What will a likely dry race on Sunday bring? We don’t know yet, and Marquez says he doesn’t either. But Saturday was a statement.

The headlines overflowed behind the number 93, too. The highest starting title challenger is Aleix Espargaro (Aprilia Racing) on the outside of the second row. Points leader Fabio Quartararo (Monster Energy Yamaha MotoGP™) starts ninth, on the edge of the third. And completing the perfect straight line of the top three title hopefuls all hurrying into Turn 1 in a row comes Francesco Bagnaia (Ducati Lenovo Team) down in 12th.

Enea Bastianini (Gresini Racing MotoGP™), meanwhile, crashed on Friday to dent his place on the combined timesheets and then slid out in Q1, so he’ll start P15. One may need to buckle up for quite a Sunday afternoon…

It was certainly a dramatic Saturday. After FP3 was cancelled due to adverse weather and limited daylight time, qualifying got underway for the premier class a little later than scheduled, but the show did not disappoint as the rain abated just enough. Marquez’ display was a stunner, and the last challenger keeping the fight going to the flag was Brad Binder (Red Bull KTM Factory Racing) as he put in a couple of red sectors. In the end, the South African couldn’t quite complete the deposition and he lines up in P3, but he takes his first MotoGP™ front row. Given the charge we saw only seven days ago, that promises much once the lights go out.

Between Marquez’ goosebump-inducer and BB33’s little piece of history made in third, Johann Zarco (Prima Pramac Racing) went from Q1 to second on the grid and ensures Ducati’s roll of 36 races in a row with a bike on the front row keeps going.

Aprilia Racing emerged as the factory team with the best positions on aggregate, with Maverick Viñales in P4 ahead of Q1 graduate Jorge Martin (Prima Pramac Racing) and Aleix Espargaro in P6. Viñales was another whose first couple of sectors looked to be on to ruin Marquez’ Honda fairytale, but it just came up short.

Jack Miller (Ducati Lenovo Team) had an uncharacteristic run in Q2 to end up P7, aiming higher on race day, and the man of the wet weather masterclass in Lombok, Miguel Oliveira (Red Bull KTM Factory Racing), had a tip off that stopped his pace converting into more than P8 on the grid. Then comes Quartararo, who is top Yamaha but will want to remain top title contender by the flag – and with his closest rivals in a straight line right behind him.

Luca Marini (Mooney VR46 Racing Team) completes the top ten, ahead of Pol Espargaro (Repsol Honda Team), who has taken a step forward this weekend, and Bagnaia in that lowly 12th. In the dry, however, what’s the biggest bet anyone would make against Pecco of late…?

Qualifying wrote the start of a few incredible stories at Motegi, and Sunday will add another chapter to each. With little dry running and the forecast for race day looking better, it could be one of the most unpredictable showdowns for some time.

Good things come to those who wait, and Aron Canet (Flexbox HP40) had to wait a while to claim pole for the Motul Grand Prix of Japan. Heavy rain hammered the Mobility Resort Motegi just minutes into Q2, leading to a delay of more than 90 minutes before the field was let loose again. But despite having to re-acclimatise to the conditions, Canet charged to pole by 0.333, with Fermin Aldeguer (Beta Tools Speed Up) and Jake Dixon (Shimoku GASGAS Aspar team) joining him on the front row. The top two in the World Championship, however, are much further back as Sunday is puts plenty on the line in the intermediate class.

Earlier, Canet had dropped into Q1 but topped that, before Q2 was called to a halt with just over nine minutes remaining. When pit lane eventually did open again, the Spaniard was immediately on it, lapping each time at anywhere from a few tenths of a second to more than half a second quicker than the rest. As the rain started to ease off, he laid down a 2:04.939 just before the chequered flag, snatching top spot back from Aldeguer after the Boscoscuro rider had clocked a 2:05.272.

More drama hit for Aldeguer then as that lap time was scratched when it was thought that he set it under a yellow flag zone, but a glitch in the system had occurred and it was reinstated after the session following manual verification. Dixon is therefore ultimately third courtesy of his 2:05.669.

Canet has some breathing space ahead of the top two in the Championship on the grid as well. Somkiat Chantra (Idemitsu Honda Team Asia) could be one to watch on Row 2 in fifth, further ahead on his teammate’s home turf, but we have to go all the way back to the middle of Row 4 to find World Championship leader Augusto Fernandez (Red Bull KTM Ajo), with home hero and key rival Ai Ogura (Idemitsu Honda Team Asia) a couple further back in P13.

They are split on the timesheets by Alonso Lopez (Beta Tools Speed Up), too, who was one of three to crash in Q2 and fast otherwise. Is the ball in Canet’s court on Sunday? Or will dry skies change the game once again?

Leopard Racing’s Tatsuki Suzuki has secured a cherished home Moto3™ pole at the Motul Grand Prix of Japan, and on his birthday no less. The Japanese rider got the job done on Honda home turf, taking three tenths out of the field in a very wet Q2. Rookie Scott Ogden (VisionTrack Racing Team) made a late dash to take second, with title contender Sergio Garcia (Autosolar GASGAS Aspar Team) completing the front row – but despite two crashes. His teammate and Championship leader Izan Guevara took P9, which puts him behind key rivals.

The conditions were wet, wet, wet on Saturday and that added to the challenge as many in the field, including Guevara, ride the track for the first time. The number 28 does have that 33-point buffer, but most of his key rivals line up ahead: Garcia is third, and home hero Ayumu Sasaki (Sterilgarda Husqvarna Max) heads the second row, just ahead of the rider he’s chasing in the standings for third: Dennis Foggia (Leopard Racing).

The last Japanese rider to win in any class at Motegi was Hiroshi Aoyama in 250cc in 2006. Will Suzuki or Sasaki be the next? Can Guevara make more gains? The lights go out for the race at 12:00 (GMT +9)