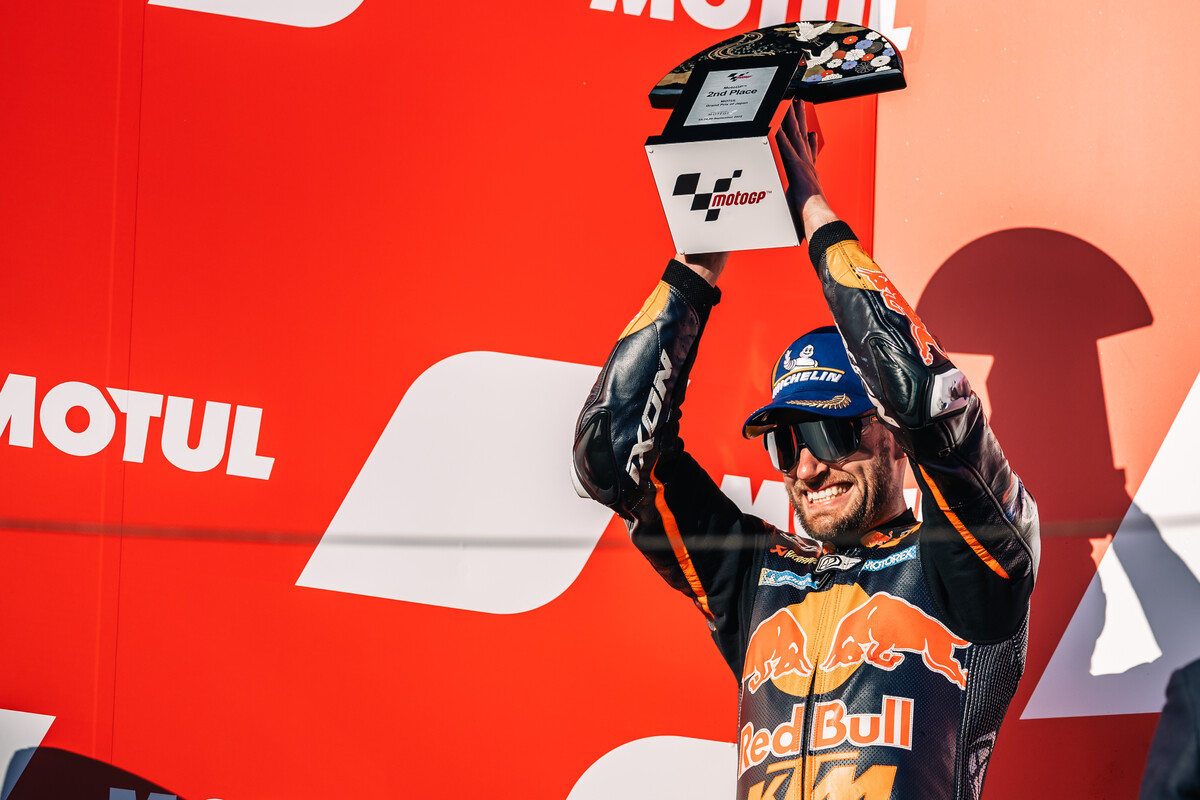 Binder puts a KTM RC16 onto the front row of the grid for the sixth time in the brand’s MotoGP story and earns his second podium finish of the season
The South African produces a wonderful overtaking move on Jorge Martin to take P2 at Motegi and now holds 6th place in the championship standings
Top five for Miguel Oliveira in what was a strong and competitive weekend for Red Bull KTM Factory Racing. 18th and 19th for Tech3 KTM Factory Racing’s Raul Fernandez and Remy Gardner
Thailand next for MotoGP with another swift journey ahead this week for the Grand Prix paddock

Round sixteen of the current MotoGP series transported the world championship from Spain directly to Motegi and the first circulations of the Japanese course since 2019. The Grand Prix was affected by rain and humid conditions during practice and qualification, which saw Brad Binder excel in Q2 to place 3rd in the classification and start from the front row of the grid for the first time in his young MotoGP career. Miguel Oliveira was not far away in 8th.

Sunday presented a different challenge as the skies cleared to be replaced by sunshine. The switch of climate meant a change of setup for the teams and riders and a degree of tire choice guesswork for the 24-lap race in mid-afternoon.

As he did in Aragon last week, Binder made a lively getaway and swept into the lead around the first corner. He had little answer to the speed of future teammate Jack Miller but produced a remarkable overtaking move on Jorge Martin through Turn 1 on the last lap to seize P2, equaling his best result so far in 2022. OIiveira briefly matched Binder pace in the formative stages but then had his hands full with Marc Marquez. The Portuguese was still able to bring his RC16 home in 5th and his third top-five classification of the campaign. Miguel’s efforts also ensured both Red Bull KTM Factory Racing bikes breached the first five positions together for the first time in 2022 and the squad are currently the fourth best team of twelve on the grid.

Raul Fernandez was the highest ranked rider for Tech3 KTM Factory Racing. The Spaniard beat his teammate, Remy Gardner, by just a tenth of a second as the pair fought for 18th position.

MotoGP continues its intense run of events with round seventeen taking place next weekend at the Chang International Circuit in Buriram for the OR Thailand Grand Prix.

Brad Binder:
“I’m really, really happy to be back on the podium today. I pushed as hard as I could right from the beginning. I had a few moments with the hard rear tire and it took me a while to find my confidence but in the end we made a good choice because I became more comfortable and could find my braking markers better. It was so difficult to pass Jorge but I arrived at that point on the last lap right at the perfect time in Turn 1. Thank you so much to my team: they all deserve this podium and we have all worked hard for this.”

Miguel Oliveira:
“It was a good race and I am proud of the performance today. The pace was a little bit too fast at the end and I could not hold my 4th place but we had a good weekend, we were fast in every condition and we made a good start. It’s a step in the right direction after two tricky races for me. A decent result and hopefully we can improve on this in Thailand