Disastrous Sunday for Öncü and Fernandez – 15th and 18th in #JapaneseGP 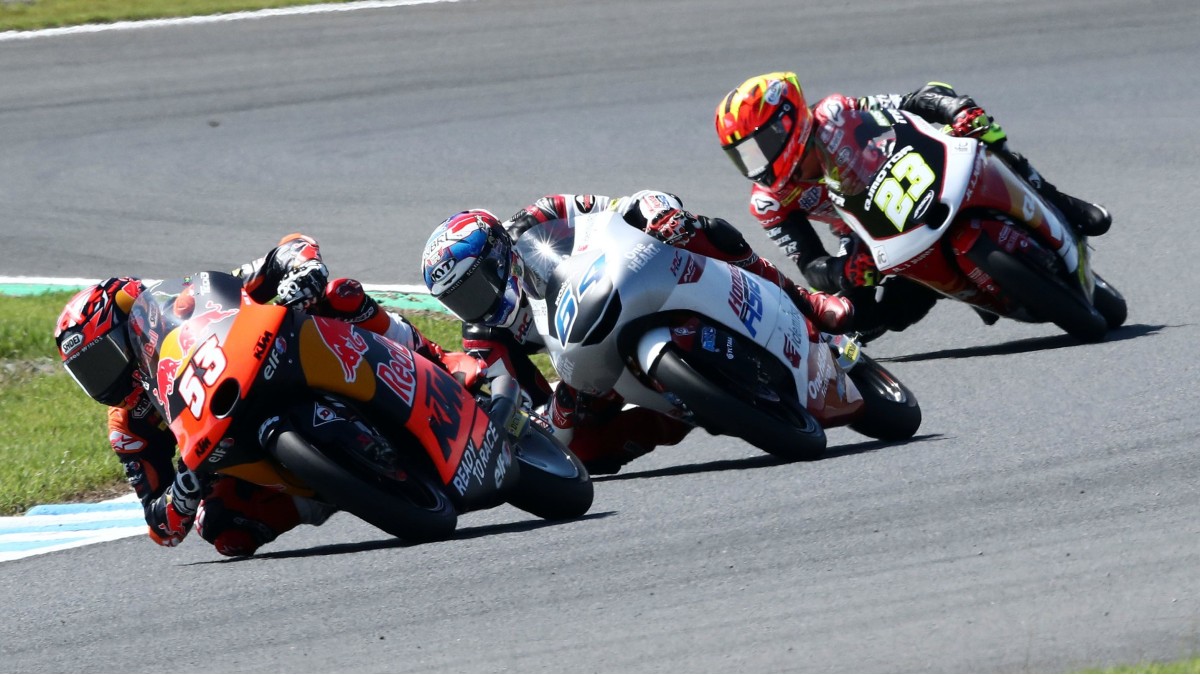 The sun finally showed up at the Mobility Resort Motegi on Sunday for the first race day in Japan in three – long – years. Despite the wet conditions, Deniz Oncu and Adrian Fernandez managed to get correct grid positions, with the Turkish rider starting from eighth today, and his Spaniard teammate from fourteenth. Everything seemed set for a good day.

However, it did not really start like the Red Bull KTM Tech3 crew would have wanted as both Deniz and Adrian crashed in the ten minute-warm up session this morning with both KTM bikes damaged. If Adrian came back directly to the garage, Deniz was taken to the medical centre for further examination. He injured his right hand little finger, but was declared fit to race. Thanks to the incredible work done by the mechanics after the warm up, Red Bull KTM Tech3 lined up in P8 and P14 at 12:00 (GMT+9).

When the lights went out for the sixteenth round of the season, Deniz Oncu did not have an ideal start and went wide within the first corners to find himself at the back of the grid. A hard job was already on the line as he started his recovery. With a finger injured, Deniz Oncu showed once again how much of a solid rock he is and his good race pace allowed him to make it to the Top 15. Not the result expected, but Deniz Oncu heads to Thailand with a well earned point.

Adrian Fernandez took a good start to his Grand Prix of Japan as he maintained his starting position, but a small mistake in the early laps caused him to crash. He managed to get up rapidly to rejoin the ongoing race. Highly motivated, he made his way back to the eighteenth position. It was not the day expected by Red Bull KTM Tech3, but we will now head to Thailand, the third and final race of the ongoing triple-header, with high hopes to do better.

The week was going pretty well for me until this morning’s warm up. I was feeling good today so I wanted to push a bit on the dry as it rained all day yesterday, which left the track a bit dirty. Unfortunately, this crash ruined my race but we made the most of it and I managed to grab one point for the championship. I want to apologise to my team, and we will head to Thailand, hopefully fully fit, and try to do a good result there.

I was feeling good this morning in the warm up but I crashed in the final lap, which is never ideal when you have to race just after. At the race, I had a good start but I crashed again, and completely lost the front. I managed to recover to P18, but it is not what we expected. Sorry to my team, and we’ll do better in Thailand next week.