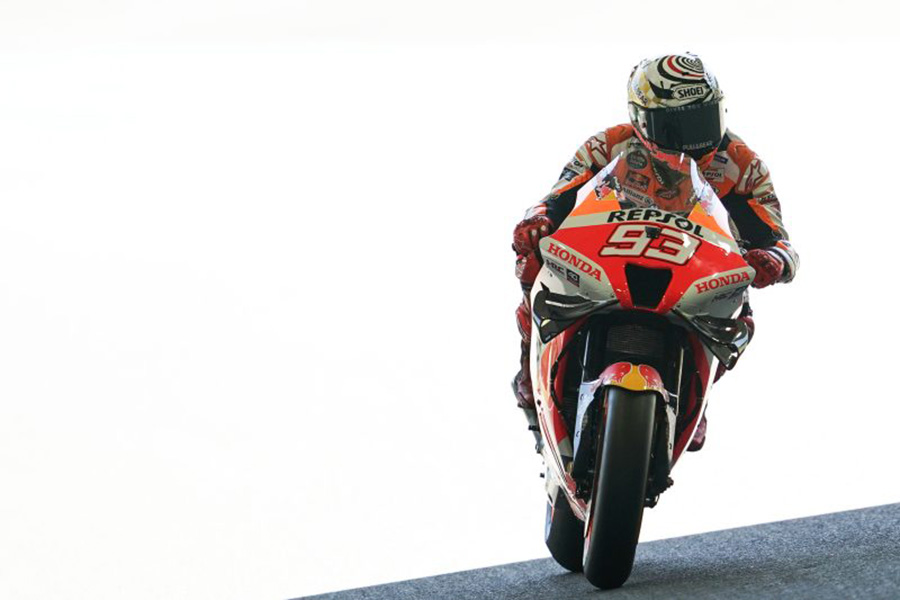 A thrilling return to the points for Marc Marquez as he took an exciting fourth place finish in just his second race back from injury, fourth months after his last complete race. Pol Espargaro earned 12th with a defensive ride in Japan.

Weather was once again front and centre at Mobility Resort Motegi as the storms broke and brilliant sunshine beat down on the track. This presented the Repsol Honda Team with the extra work of readjusting the setting of the Honda RC213V to the hotter, and dryer, conditions of the day. A strong start to Warm Up allowed both sides of the garage to gain the data they needed. Marc Marquez and Pol Espargaro each suffered falls at Turn 9 during Warm Up without serious consequence.

For the 91st time in his career, Marc Marquez lined up in pole position in what would be his 150th race in the premier class with the Repsol Honda Team. A solid launch saw Marquez defend his place inside the top three in the opening corners as the race erupted behind. Taking a steady approach to conserve his strength until the end of the race, the #93 settled into fifth and his own pace.

His plan played out and as the race entered its closing stages, Marquez reeled in Miguel Oliveira ahead. Biding his time, the eight-time World Champion struck on lap 22 with a strong pass for fourth in the race. The finish marks not only a return to the points for the first time since Mugello for Marquez but also equals his best finish of the year, achieved at the Spanish Grand Prix in Jerez. It was an exciting end to a race enjoyed by Honda President and CEO Toshihiro Mibe and the assembled Honda and HRC board members inside the Repsol Honda Team garage.

Like his teammate, Pol Espargaro launched well and gained several positions off the line. The #44 was fast in the opening laps as he hunted down reigning MotoGP World Champion Fabio Quartararo and attempted to push deeper inside the top ten. Mounting pressure from Bagnaia and Bastianini behind forced Espargaro to focus on defending as his tyres began to drop and Quartararo escaped ahad. Holding the Ducati pair off for the majority of the race, Espargaro would cross the line in 12th place and netted his best finish since the French GP.

Honda enjoyed home delights as Ai Ogura became the first Japanese rider to win at home since Hiroshi Aoyama won the 250cc Japanese GP in 2006. Ogura now sits just two points back from the lead of the Moto2 World Championship.

Now the paddock once again prepare immediately for the next race, a return to the Thai GP and the final race in this triple-header. The MotoGP World Championship’s last visit in 2019 saw Marc Marquez lift his eighth World Championship title with a thrilling last-lap victory.

“I am very happy with how the whole weekend has gone and we were able to put together an exciting race in the end. Most importantly it was a productive weekend and overall, it was a lot better than we were expecting. It was an important race because it is the first I have finished since my operation so it was a good test of the arm and also in this area we’ve been able to learn. Of course I would have liked to finish higher, but being realistic it was a good result and I was able to maintain my rhythm and then attack in the last laps. I want to say thanks to Honda and the Repsol Honda Team for helping me to put together a good weekend. Also thank you to all the Japanese staff and fans who came this weekend, it was a pleasure to see everyone again. Now we go to Thailand!”

“I was feeling good in the first laps honestly. I was behind Quartararo and I felt like I was faster than him, I just couldn’t get close enough to pass him and I didn’t want to risk anything. After six or seven laps behind him the performance dropped a bit and allowed some riders to get past me so I lost my rhythm a bit. My tyres dropped and I started to struggle more. But it’s important to focus on the positives, and today we were strong at the start. It is an improvement over Aragon and we will try to make another step next week.”