Guevara wins in Moto3 at Motegi, Jake Dixon just off the podium in Moto2 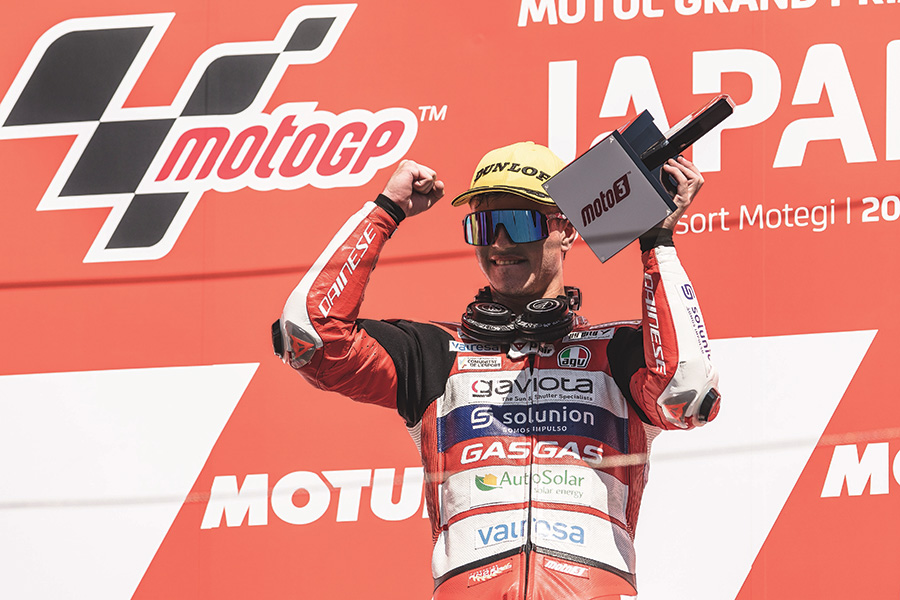 GASGAS goes big in Japan as racing returns to the stunning Mobility Resort Motegi circuit for the first time since 2019. Cutting through the high drama created by the weather – which brought Typhoon storms and rain, and then a sun-baked race day – both the Gaviota GASGAS Aspar Moto3 Team and Inde GASGAS Aspar Moto2 Team enjoyed a solid weekend hunting around the 4.8km circuit.

Looking ever the champion elect, Izan Guevara logged a sensational performance at his first ever visit to the Japanese venue. Despite crashing heavily during Sunday morning warm-up, and starting the race from P9, the 19-year-old Spanish racer rocketed through from the start to leapfrog up the order and emerge as race leader inside the first lap. What followed was a treat for fans worldwide, as Guevara proceeded to control the race from the front, shrugging off intense pressure from Ayumu Sasaki, Dennis Foggia and Jaume Masià.

The excellence not only netted Guevara the win but, significantly, it was also his second back-to-back victory of the season, and now gives him a 45 point lead in the championship over his team-mate, who is currently placed second. García in fact salvaged another challenging weekend with a solid ride into 4th. Starting on the front row, García had looked unsettled on the bike during the Japanese weekender – suffering two huge crashes during qualifying. Nevertheless, he pushed hard to manage his race and record another 13 points to his championship campaign.

In Moto2, Jake Dixon endured a rollercoaster ride from the front row of the grid to a 4th place finish. Ever his own harshest critic, Dixon had remained unconvinced at his own speed at Motegi, and despite a difficult start where the 26-year-old British rider slipped back to ninth, Dixon worked hard to recover back to the sharp end of the pack, only narrowly missing out on a podium place by 0.4 seconds.

Teammate Albert Arenas also salvaged his Japanese weekend from a low grid start to a top eight ranking. After suffering a crash during the wet conditions of Q2 on Saturday, Arenas was forced to start Sunday’s race from a lowly P17. Working hard through the 22 lap Grand Prix, Arenas chipped away to bag another eight points towards his championship campaign.

With the Asian leg of the 2022 season in full effect, the action moves to the Chang International Circuit for the Thailand Grand Prix in just a week’s time – on October 2nd.

#11 – Sergio García:
“A positive day in terms of my feeling on the bike and the fast pace in the race. I was improving lap-by-lap and that was the key today in keeping and bettering my position. We made a step forward here compared to MotorLand last week. Now we have to make another in Thailand.”

#28 – Izan Guevara:
“I’m really happy with my race – I made an incredible start from P9 and pushed as hard as I could. I want to say a big thanks to my team because I had a big crash during warm up, and they were able to repair the bike in record time. Massive thanks to everyone for their support – back to back victories now; it’s just incredible!”

#75 – Albert Arenas:
“A difficult race but I think we can be satisfied with our comeback. We take points home and more knowledge about how to handle rear grip. We want more than this but it was still a platform to build from ahead of the other flyaways.”

#96 – Jake Dixon:
“I was a bit nervous at the beginning but then found my rhythm and started to pick off the guys around me to eventually get back to 4th. I closed the gap to Alonso but in the last moments I was just thinking about not crashing. If it hadn’t been for a few DNFs lately then I might have had a go at it. I thought it was better to bring back 4th position. There are still things we can improve and it was just my second time here in Motegi so the top four is not too bad today.”