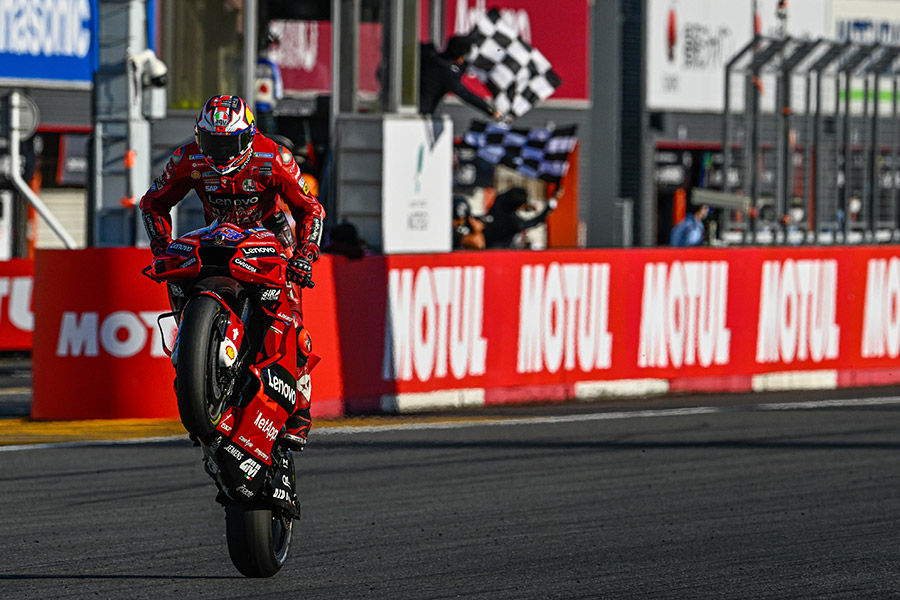 Jack Miller (Ducati Lenovo Team) took a scintillating win at the Motul Grand Prix of Japan, hitting the front and never looking back. Behind him, Red Bull KTM Factory Racing’s Brad Binder came home in a stunning second after a last lap attack on Jorge Martin (Prima Pramac Racing), with the former taking a second podium of the season from his first ever premier class front row and the latter back on the box for the first time since Barcelona.

Elsewhere for the title contenders there was drama of differing measures, leaving the top three to take home only eight points between them – and they were all scored by Championship leader Fabio Quartararo (Monster Energy Yamaha MotoGP™) despite the fact that he could only manage eighth. Aleix Espargaro (Aprilia Racing) suffered the first drama as he found his first machine stuck in fuel saving mode and dived into the pits after the Sighting Lap to change, only able to make it up to P16 thereafter, and Francesco Bagnaia (Ducati Lenovo Team) created the second as he made a last lap blunder in the battle with Quartararo and Enea Bastianini (Gresini Racing MotoGP™) – taking home nil points in the process as he slid out.

The duel into Turn 1 saw Binder move into the lead courtesy of the inside line, as Martin passed Marc Marquez (Repsol Honda Team) for second through Turn 3. Miller’s charge started early though, and he made a forceful move for fifth on Maverick Viñales (Aprilia Racing) at Turn 5 and then passed both Miguel Oliveira (Red Bull KTM Factory Racing) and Marc Marquez in one fell swoop at the 90 Degree Corner. He then dispatched Binder at the same place before also pinching the lead from Martin not long after, free in the lead and the hammer immediately down. From there, he didn’t look back and only extended the gap – crossing the line three and a half seconds clear for a stunning Thriller of a win.

In classic Binder style, the South African was chipping away at the gap to Martin ahead of him and by the last few laps was within striking distance. But he waited, and Binder vs Martin was decided on the last lap as the KTM rider chose his moment, making it stick and able to pull out a few tenths. Marquez vs Oliveira vs Luca Marini (Mooney VR46 Racing Team) was similarly decided late, with Marquez dispatching the Portuguese rider late on and the number 88 then left to defend against Marini. That he did, repelling a last lap attack.

Marquez’ fourth place from pole is another step in the right direction as the number 93 begins to remind the grid, if they needed it, that he really is back, and Oliveira’s fifth wasn’t quite a podium but it makes two KTMs in the top five. Marini, meanwhile, continues his impressive consistency and points hauls in sixth.

Maverick Viñales (Aprilia Racing) took seventh, and the number 12 was just to the front of a title fight in miniature: Quartararo, Bagnaia and Bastianini, all in a row and battling for eighth. Bagnaia snatched ninth back from Bastianini through Turn 12/Turn 13 on Lap 20 after an earlier shuffle, and that gave him a clear shot at Quartararo. Could he or even would he? The three were incredibly close together and Pecco misjudged it as the front tyre said no more, and he slid out. Quartararo continued to take those eight points, Bagnaia took a 0 after his overambitious move – his words, to accompany his sarcastic applause at himself as he walked away – and Bastianini inherited ninth. Marco Bezzecchi (Mooney VR46 Racing Team) rounded out the top 10.

So what of Aleix Espargaro? The Aprilia rider had a different tyre than his race choice on the second bike, and that hampered an already difficult comeback task. He took P16, finishing but just missing out on points.

That’s a wrap on the paddock’s return to Japan. After mayhem in Motegi, Quartararo’s World Championship lead has grown to 18 over Bagnaia, while Aleix Espargaro is another seven behind, but there are still four rounds to go. The next is already on the horizon as the OR Thailand Grand Prix beckons and the paddock returns to Chang International Circuit, with action back underway on Friday.

Ai Ogura (Idemitsu Honda Team Asia) became the first Japanese rider to win on home turf since 2006 at the Motul Grand Prix of Japan, holding off key Championship rival Augusto Fernandez (Red Bull KTM Ajo) to the flag after both had to pick their way through from outside the top ten on the grid. Alonso Lopez (Beta Tools SpeedUp) made life difficult at times for both with another stellar ride, ultimately forced to settle for third but taking another impressive podium finish in his rookie season.

With Ogura’s historic win in front of the home crowd, he cuts the gap in the Championship to just two points behind Fernandez with four races to go. Polesitter Aron Canet (Flexbox HP 40), meanwhile, crashed out and falls to 57 points off the top in third overall. Celestino Vietti (Mooney VR46 Racing Team) also crashed out, now 72 behind and facing a last stand to stay in it at Buriram.

Jake Dixon (Inde GASGAS Aspar Team) made a late run at the podium but couldn’t get close enough to Lopez to attack, but he came home ahead of early race leader Somkiat Chantra (Idemitsu Honda Team Asia) as the Thai rider ultimately took home a top five ahead of his home round next time out.

Next up it’s Buriram as the intermediate class arrives with just two points in it between what looks like it could be the last two riders standing in the title fight.

Izan Guevara (Autosolar GASGAS Aspar Team) has done it again! Despite never riding at the Mobility Resort Motegi before, the number 28 took another impressive win as he was able to hold off Dennis Foggia (Leopard Racing) and Ayumu Sasaki (Sterilgarda Husqvarna Max) at the Motul Grand Prix of Japan. The last lap was a showcase in precision and pushing to the limit for all three, with no one quite able to make a decisive move before the flag flew.

The win for Guevara puts him a whopping 45 points clear of teammate Sergio Garcia in the standings. Foggia closes to within 18 points of the second place held by Garcia for the moment, with Sasaki still fourth but also gaining ground on the number 11.

Jaume Masia (Red Bull KTM Ajo) had been in the battle for the win before a late highside out of second place, putting a dent in his place in the standings, and polesitter Tatsuki Suzuki (Leopard Racing) fought at the front in the early stages before his race came to an early end with a crash.

Now the title fight goes down to the OR Thailand Grand Prix, with Guevara not yet able to take his first shot at the crown but getting ever closer to it. What will Buriram bring?