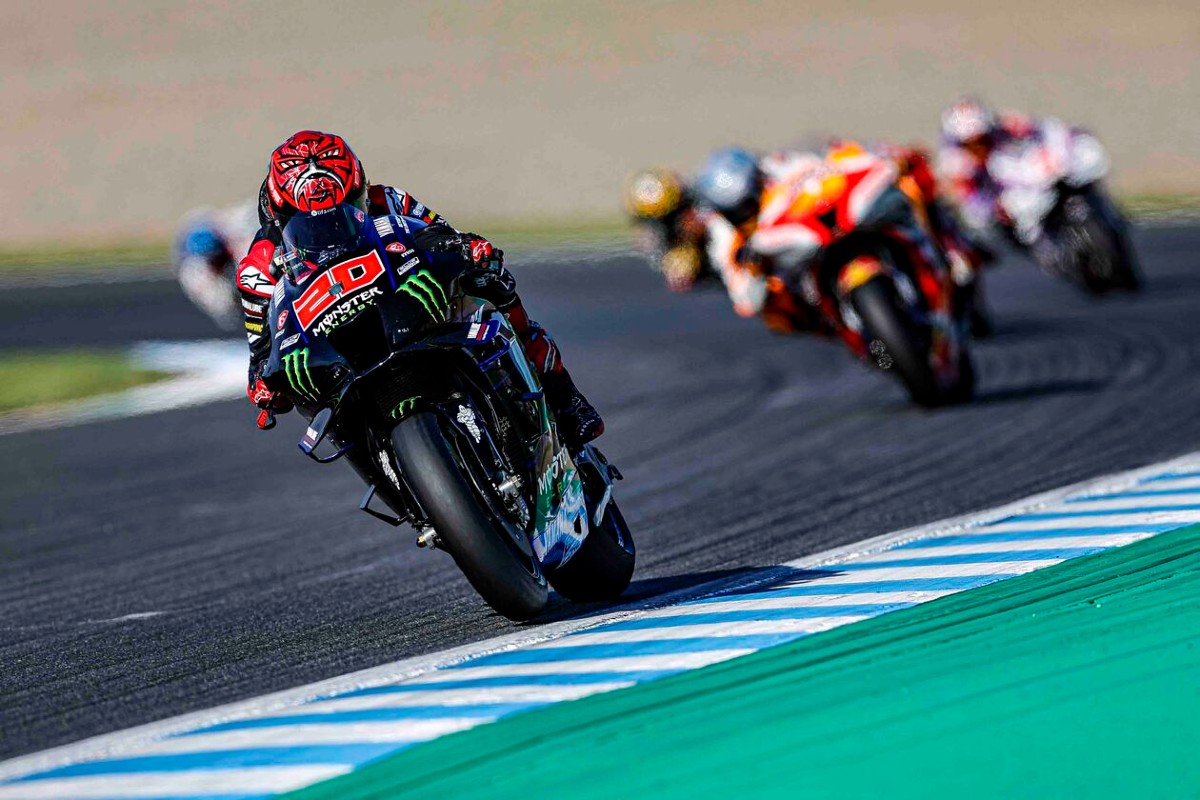 Monster Energy Yamaha MotoGP Team‘s Fabio Quartararo showed nerves of steel in today‘s Grand Prix of Japan. He was under pressure in the final stages of the 24-lap race, but he didn‘t let it get to him. He secured eighth place, extending his championship lead by 8 points. Franco Morbidelli had a lonely but still rewarding ride. Starting from P14, he maintained that position across the finish line, adding 2 points to his tally.

Quartararo held his P9 starting position throughout the busy opening lap. Aleix Esparagró had to start from pit lane due to an issue with his bike. With all his main rivals behind him, Number 20 decided to ride strategically. He spent the first half of the race battling for eighth with Luca Marini. On lap 6, Zarco went wide, handing the duelling duo another position. The pair went on to close the gap to Maverick Viñales ahead of them. However, El Diablo couldn‘t find a way through. With three laps to go, main title rival Francesco Bagnaia loomed up behind the Yamaha man, and Quartararo had to be both on the attack and defence. He didn‘t give an inch and remained in eighth place across the finish line, 10.193s from first, while Bagnaia crashed on the last lap.

Morbidelli started the race from P14 and was trying to make his Yamaha as wide as possible in the opening lap. He crossed the start-finish line in fifteenth place the first time round. He then engaged in battle with riders around him. But after various crashes, the pack was soon pulled apart. It became a lonely ride for the Italian, but he didn‘t stop pushing. Flashing occasional orange sectors on the live timing screens, he rode to the chequered flag. Morbido ended the Japanese GP in 14th place, 19.012s from the race leader.

After today‘s race, Quartararo‘s lead in the championship standings is now 18 points, with a 219 points total, while Morbidelli remains in 19th, this time with 28 points. After Round 16, Yamaha are third with 221 points in the Constructor championship, and Monster Energy Yamaha MotoGP place fifth in the Team championship with 247 points.

With all these circumstances, and after all that happened, I would say it’s definitely better to gain eight points than to lose them. It’s good in one way but frustrating in another because I feel like our potential was to fight more towards the front. But I couldn’t get in an overtake on Maverick. We ride in such a different way compared to the others. I gain so much time in Sector 2 and 3, but I lose it in Sector 4 and 1. I don’t think we made the correct tyre choice, but we managed the tyre pressure really well this race. I didn’t see Pecco, but I did hear him crash, so I think he didn’t crash that far from me. I knew he was coming. Maverick had a good pace, but I was stuck behind him, that was the difficult part.

It was a particular race. I lost a lot of time in the beginning because I got tangled up with Alex Rins. He had a problem with his bike but kept overtaking me and then going wide, overtake me and going wide again. I spent the remainder of the race trying to catch up with the group that was in tenth to fifteenth, which was me at the time. I caught up in the end, but I couldn’t do anything.