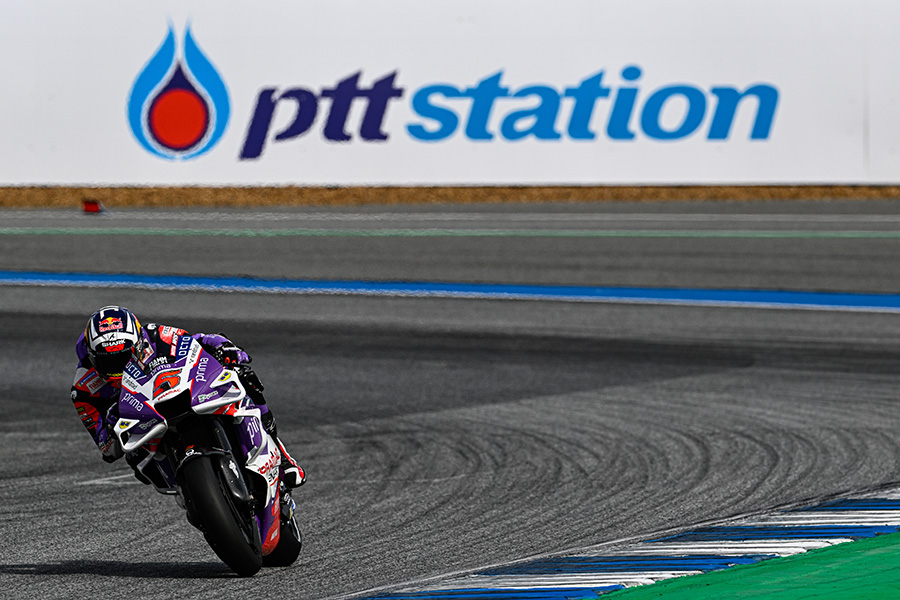 After two sessions back in business in Buriram, it’s incredibly close at the top at the OR Thailand Grand Prix. Johann Zarco (Prima Pramac Racing) just took it by 0.018, with Championship challenger Francesco Bagnaia (Ducati Lenovo Team)the rider just denied the top spot but taking second. Jorge Martin completed an all-Ducati top three, and made it both Pramacs in the upper echelons.

World Championship leader Fabio Quartararo (Monster Energy Yamaha MotoGP™) had a solid day on the timesheets in fifth, right behind one rider with a little fighting talk on Friday: Marc Marquez (Repsol Honda Team). The number 93 rated his chances of a podium highly if we raced on Day 1, and was fastest in FP1 despite a slide off. Quartararo and Marquez both set their best laps in FP1, too.

On the other side of the coin, both the riders third and fourth in the standings are currently heading for Q1 and outside the top ten. Aleix Espargaro (Aprilia Racing)was 13th and teammate Maverick Viñales 15th as the new RS-GP tackles Thailand for the first time, and Enea Bastianini (Gresini Racing MotoGP™) was 11th on Friday – missing out by just 0.025.

While it rained on and off during Friday, the track was well and truly dry for MotoGP™ FP2. That gave competitors the opportunity to work on their race pace and while Alex Rins (Team Suzuki Ecstar) was top for the session on a 1:31.088 with 10 minutes to go, there still had been no change to the combined top 10. That would change once the time attacks started, but even then, only half the 24-strong field improved on their FP1 pace. Martin was first to shift the benchmark, then Bagnaia and finally Zarco.

Japanese GP winner Jack Miller (Ducati Lenovo Team) is sixth-fastest overall. He was frustrated with himself at a mistake while going underneath Tetsuta Nagashima (LCR Honda Idemitsu) in the closing minutes, but his FP1 effort was good enough to provisionally book a spot in Q2. Luca Marini (Mooney VR46 Racing Team) took seventh on combined times, ahead of Miguel Oliveira (Red Bull KTM Factory Racing), Rins, and a much improved Friday position for Franco Morbidelli (Monster Energy Yamaha MotoGP™).

Cal Crutchlow (WithU Yamaha RNF MotoGP™ Team) was one crasher at Turn 7, and that also  triggered a relatively long yellow flag in Sector 3 near the end of FP2, affecting some. Crutchlow walked away in some pain after losing the rear and being flicked from his YZR-M1 in what was his second crash of the session, ut rider given the all clear at the Medical Centre. Also hitting the floor during the afternoon were Marco Bezzecchi (Mooney VR46 Racing Team) at Turn 3, Fabio Di Giannantonio (Gresini Racing MotoGP™) also at Turn 3 in a separate incident, and Darryn Binder (WithU Yamaha RNF MotoGP™ Team) at Turn 7 – riders okay.

Now we wait to see what the weather gods have in store on Saturday morning, with Bastianini and Aleix Espargaro among those hoping for dry weather again…

Inde GASGAS Aspar Team’s Jake Dixon is the rider to beat after Friday’s running at the OR Thailand Grand Prix. His 1:36.280 puts him 0.173 clear of Alonso Lopez (Beta Tools Speed Up), with World Championship leader Augusto Fernandez (Red Bull KTM Ajo) third quickest despite a late spill. Japanese GP winner Ai Ogura (Idemitsu Honda Team Asia) finished seventh and, in the event of rain on Saturday morning, he too is safely through to Q2.

Fernandez topped FP1 before all but three riders improved in the afternoon, and Dixon took to the top. Lopez also improved after a technical problem in FP1, and Fernandez crashed late in the session, but rider ok and still third overall. Home hero Somkiat Chantra (Idemitsu Honda Team Asia) dusted himself off from an early crash to up the pace and end the day fourth.

Aron Canet (Flexbox HP40), however, is outside the top 14 after a second crash of the day when he lost the front at Turn 12. The Spaniard is 16th as it stands.

After a damp start, Ayumu Sasaki capitalised in FP2 for Moto3™ and set a 1:43.503 to head the eidl ahead of compatriot Tatsuki Suzuki (Leopard Racing) on a 1:43.694. The duo were together over sixth tenths clear of the rest, with Riccardo Rossi (SIC58 Squadra Corse) leading that rest in third on a 1:44.330.

Moto3™ was the only class which had not enjoyed any dry running on Friday morning, but halfway through FP2 the sun then made a cameo and the lap times began to tumble.

Suzuki looked like getting the sweep of the Friday sessions – a wet one and a dry one (eventually) – when he set a 1:43.694 in the last two minutes before the chequered flag.But Sasaki struck late to end the day 0.191 seconds clear of the Leopard Honda rider and 0.827 seconds up on Rossi.

Red Bull KTM Ajo teammates Daniel Holgado and Jaume Masia rounded out the top five, while Red Bull KTM Tech3’s Deniz Öncü was a commendable sixth as he grits his teeth with an injured finger after his highside in Warm Up five days ago at Motegi.

With the possibility of rain on Saturday morning, it was important for Guevara to make the top 14 cut-off for Q2 by claiming seventh on a 1:44.570. Ivan Ortola (Angeluss MTA Team), Dennis Foggia (Leopard Racing), and Scott Ogden (VisionTrack Racing Team) completed the top 10, ahead of Kaito Toba (CIP Green Power), Andrea Migno (Rivacold Snipers) and Garcia.