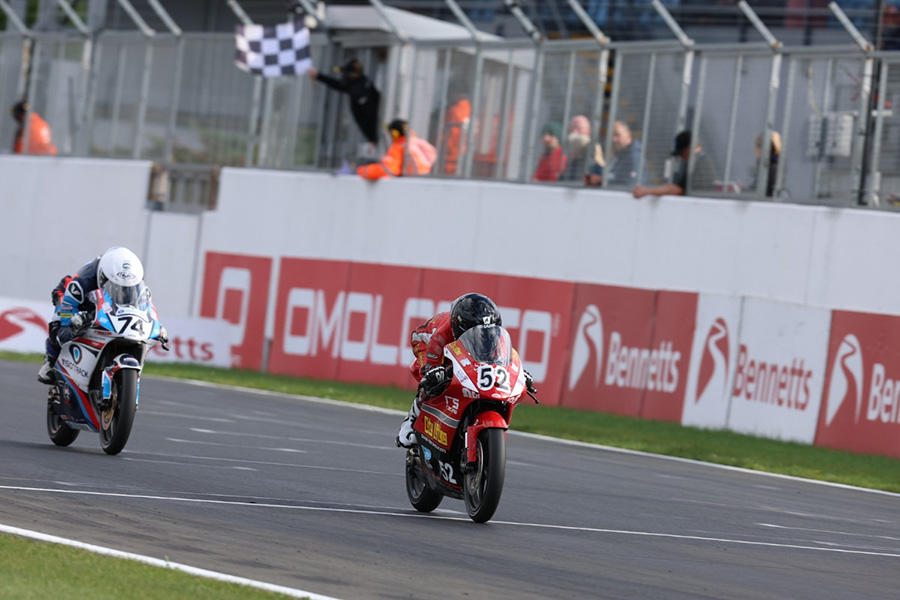 The final chapter of the 2022 Honda British Talent Cup got underway at Donington Park on Saturday and, with the title already decided, it was all about the battle for second and behind. Starting from pole position and looking to make amends in Race 1 of the final round, Evan Belford (City Lifting by RS Racing) was hoping to sign off the season in style. Despite the gathering clouds and the threat of rain, the race stayed largely without rain drama, and it was Belford who went on to take victory as he triumphed in a last lap battle.

There was another headline made even ahead of racing action commencing, however: Johnny Garness (MLav VisionTrack Academy), the 2022 Champion, crashed in qualifying and has been forced to watch the final showdowns of the season from the sidelines. With that he also lost the chance to go for a new record of wins in a row, with focus instead shifting to that battle behind in a hotly contested fight for the top echelons of the standings.

As the penultimate race of the year began without the Champion on the grid, there was drama on the start line as Clayton Edmunds (MJL Racing), from ninth, had problems and was forced into pitlane, and then the holeshot went polesitter Belford but he was soon picked off by Rhys Stephenson (Rocket Racing), who had a half a second lead by the halfway point in the lap. At Turn 1, Harrison Mackay (Wilson Racing/Super Soco) and Ryan Hitchcock (City Lifting by RS Racing) crashed out, but there was no action taken. Belford was back into second ahead of Carter Brown (MLav VisionTrack Academy) in third, whilst Lucas Brown (SP125/Amphibian Scaffolding) was fourth and Harley McCabe (MLav Vision Track Academy) in fifth. At the start of Lap 3 of 15, Belford hit the front at Turn 1 whilst Stephenson was pushed back to third at the Old Hairpin by Carter Brown.

On Lap 6, the first rain flag of the day was flown on Lap 5 going through Foggy Esses and going into the Melbourne Loop, Stephenson hit the front. A brief exchange on Lap 6 at Turn 1 saw Belford ahead but Stephenson cut back and led the way. Then, once again, at the Melbourne Loop on Lap 6, the lead changed with Belford striking, Stephenson sitting in second whilst Carter Brown kept a watching brief behind. Meanwhile in fourth, McCabe was holding off Harrison Crosby (Banks Racing), and Lucas Brown, with McCabe lapping quicker than the three ahead of him.

With a new lap record set for the class at Donington Park by Belford on Lap 8, it was matched by Stephenson on Lap 9, with the pace once again extremely hot. There was a good battle for seventh, with James Cook (ThorneyCroft56 Racing) putting a pass on Filip Surowiak (MJL Racing) for seventh, as Sullivan Mounsey (Wilson Racing/J&S Accessories) and Harrison Dessoy (Microlise Cresswell Racing/Eastern Garage Racing) completed the top ten.

On Lap 12, however, there was major drama with Belford and Stephenson as the two collided going through Turn 6, leaving Stephenson in the dirt. Thankfully he was perfectly OK, but his bid for third place overall had been hurt. That promoted McCabe into third on track.

A lap later, Carter Brown got ahead of Belford at Turn 11, with the number 52 striking back at the start of Lap 14. Onto the final lap, Belford again came under attack at the Melbourne Loop from the number 74, but Brown ran wide, allowing Belford to get the cut-back and take a second victory of the season. Brown was second ahead of McCabe, whilst Lucas Brown was fourth ahead of Crosby in fifth, Surowiak, Cook, Mounsey, Dessoy and Daniel Goodman (MLav VisionTrack Academy) completing the top ten.

donington
Get All Our Latest News Sent Direct To Your Inbox
Join 30,271 other subscribers.
Follow on Social Media
Get the VROOM Podcast