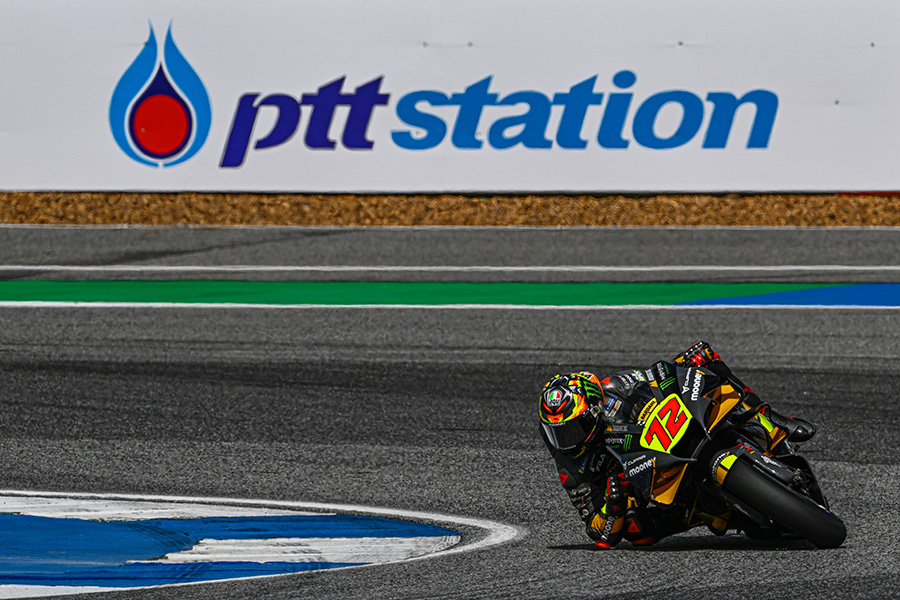 The fight went down to the final few seconds as Martin’s provisional pole was snatched away by Bezzecchi, but the number 89 had one last shot at it. And it was close, but he couldn’t quite snatch it back, leaving it as just 0.021 splitting the two.

Bagnaia was first to put in a serious challenge for pole as he headed out earlier than many for a second run, and the Italian made up a huge chunk of time late in the lap. In the end, however, it gives him third – and he is the top qualifier of the Championship challengers.

It’s close, however, with Fabio Quartararo (Monster Energy Yamaha MotoGP™)next up at the head of the second row, and that second row is completed by Enea Bastianini (Gresini Racing MotoGP™). The contrasting fortunes were for Aleix Espargaro (Aprilia Racing), with both Aprilias failing to make it out of Q1 at a track the new RS-GP is taking on for the first time. He’ll want to leap forward on Sunday from P13.

Johann Zarco (Prima Pramac Racing) splits Quartararo and Bastianini on Row 2, with Jack Miller (Ducati Lenovo Team) at the head of Row 3 – but the same place he qualified at Motegi as he blasted away to a dominant win.

Marc Marquez (Repsol Honda Team) came through Q1 and was challenging for the front row on his final lap of Q2, but the number 93 then lost over four tenths in the final sector as the final corner proved the lap’s undoing. Still, Marquez will likely prove one to watch on Sunday as the only rider to win at Buriram so far. Luca Marini (Mooney VR46 Racing Team) starts alongside the eight-time World Champion.

Alex Rins (Team Suzuki Ecstar) completes the top ten ahead of both Red Bull KTM Factory Racing machines of Miguel Oliveira and Brad Binder, with the Austrian factory looking for more in that final push of qualifying – but likely to move forward once the lights go out.

So, we have a first-time pole-sitter with a shot at Rookie of the Year, Bagnaia and Quartararo close on the grid, Bastianini with less and less to lose, and Aleix Espargaro looking for a lot more on Sunday. The battle for Buriram supremacy takes place over what are sure to be 26 thrilling laps from 15:00 (GMT +7).

The home crowd expected, and he delivered! Somkiat Chantra (Idemitsu Honda Team Asia) will start from pole for his home OR Thailand Grand Prix, achieving the feat for the first time in his career and in doing so becoming the first Thai rider to take pole in Grand Prix history. Tony Arbolino (Elf Marc VDS Racing Team) was the rider denied, by less than a tenth, with Ai Ogura (Idemitsu Honda Team Asia) completing the front row.

Championship leader Augusto Fernandez (Red Bull KTM Ajo) starts eighth and has a little work to do on race day, although the number 37 has made short work of a comeback several times already this season.

One key incident in Q2 saw Albert Arenas (Inde GASGAS Aspar Team) and Joe Roberts (Italtrans Racing Team) come together. The latter went to the Medical Centre and no fractures were found but he’ll be reviewed before Warm Up. Arenas is left P15 on the grid and Roberts P17.

There’s just two points between Fernandez and Ogura heading into race day in Thailand, but the two have to share the spotlight this weekend as Chantra races on home turf. Can the number 35 complete the fairytale weekend? The lights go out at 13:20 (GMT +7)…

A new lap record puts Dennis Foggia (Leopard Racing) on pole for the OR Thailand Grand Prix, with the riders on the chase in the standings coming out on top on Saturday: Jaume Masia (Red Bull KTM Ajo) is second on the grid, 0.292 back, and Ayumu Sasaki (Sterilgarda Max Racing Team) third a little further in arrears.

Championship leader Izan Guevara (Gaviota GASGAS Aspar Team) will start 11th after making it out of Q1, but the number 28’s deficit to Foggia is nearly a second. Nevertheless, he started ninth in Motegi and won.

Even if he can’t repeat that feat, his lead may still extend – his teammate Sergio Garcia (Gaviota GASGAS Aspar Team), the rider second in the standings, is P20 on the grid after failing to make it out of Q1.

Foggia now holds the all-time, pole lap and best race lap records at Buriram in Moto3™… can he put them to good use on Sunday? The lightweight class go racing at 12:00 (GMT+7).