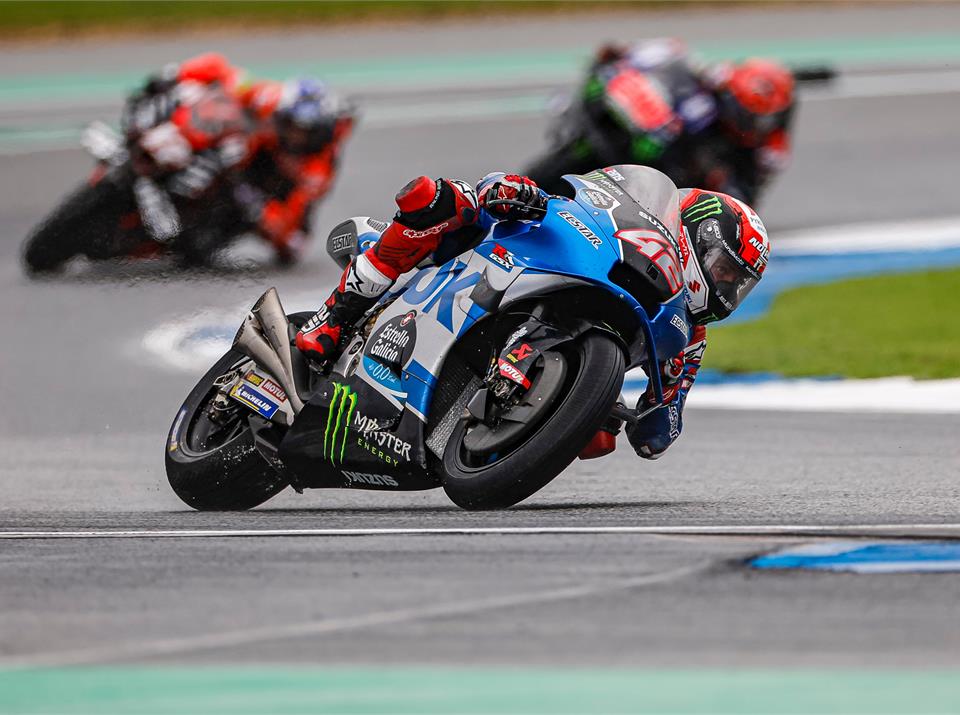 MotoGP’s return to Buriram was a brutal one, with the passionate fans packing the grandstands but extreme weather blighting the big race. A huge thunder storm swept through the circuit ahead of the start, delaying the off by almost an hour.

Visibility and spray were a big issue as the 25-lap race finally got underway, making it particularly tough for those further back on the grid, like Suzuki’s Alex Rins and Danilo Petrucci who started from 10th and 24th respectively. Rins ran wide a few times on the early laps as he tried to get to grips with conditions, but by the fifth lap he had climbed up into the points with 15th place. He spent the remainder of the race keeping close to the battle in front of him, carefully holding position and staying mindful of the track limits warning he’d picked up. He crossed the finish line in 13th, fractions of a second behind Franco Morbidelli, but the Italian later picked up a penalty which promoted Rins to 12th.

Petrucci’s favoured conditions are ‘the wetter the better’, but he faced a big struggle from the back of the grid. However, the stand-in rider managed to finish the race in 20th place, and he certainly enjoyed the experience.

“The race was a bit tricky and hard to manage. There was a lot of standing water on the track, and when you’re in a group with many riders it was so difficult to see with the spray, so I just tried to stay clean and stay safe. It’s not a great result, but my feeling on the bike was actually not bad, especially given we haven’t had much wet track time this year. I’m looking forward to going to Australia next, Philip Island is a cool track to ride and I hope for a better result there.”

“First off, I would like to thank the entire team for their help and the big effort they put in. It’s been a huge source of pride for me to ride this bike in this team, they are a really amazing group and they gave everything to find the best setup for me. I struggled today because I didn’t have any wet track time and I found it hard to suddenly ride in the wet, but I relaxed into the race and tried to get into the points. It wasn’t possible and I finished 20th, but I’m still really happy to have been here and able to race with Suzuki.”