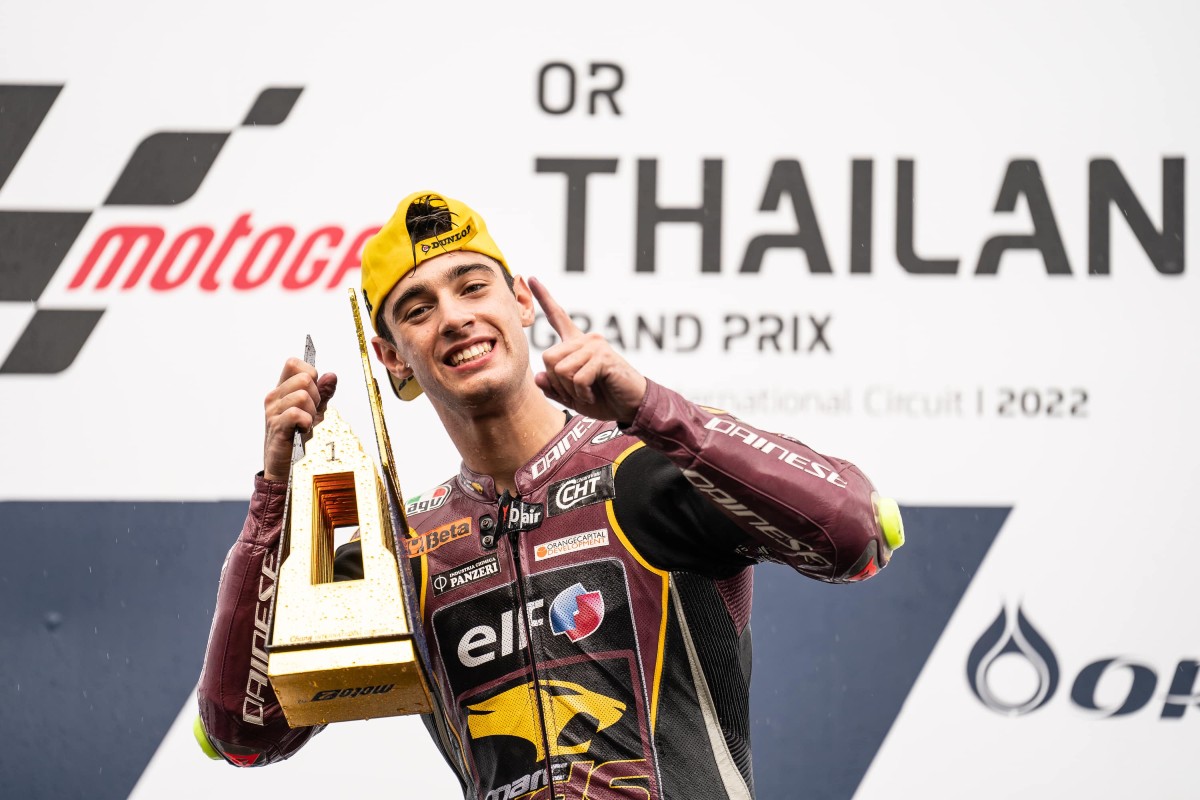 Five minutes before the race was due to get underway, a heavy rain shower arrived at the track, delaying the start by just over 10 minutes, and reducing race distance from 24 to 16 laps.

The reduced race was then stopped after eight laps due to the worsening conditions. Race Direction planned a restart to be held over five laps. But as riders exited pit lane, a further heavy shower brought out the red flags once again.

That meant a result was called after eight laps of the initial race, with half points awarded for the riders that finished inside the top 15.

Tony took his time to understand the conditions and levels of grip early on, and dropped from second to ninth on the opening lap.

But the 22-year old soon mounted a brilliant comeback. By lap six he had climbed to third. His wet weather riding came to the fore on the eighth lap, where he overtook Filip Salac for the lead at turn three, just before the red flags were shown.

Thanks to his second Moto2 win, the 12.5 points Tony got for victory keep him fifth in the World Championship standings with 150.5 points, 14.5 back of Celestino Vietti in fourth.

An amazing result! This was a real victory. If the race wasn’t stopped, I still think I would have won. I was really focussed and calm and felt like the win was mine. I was 100 percent confident we did the right work through the weekend to get this. We are happy about the points we scored. But the win is for us, for the team. It’s my first victory in wet conditions so I’m really happy about that. Let’s keep this going because we’re showing a really good level. We need to enjoy this and continue having fun.

Starting his first race since the end of June, the Briton was understandably tentative in the treacherous conditions on the first lap. But by the second lap, Sam had climbed from 25th to 19th.

After having just two laps in wet conditions prior to the race, Sam prioritised finishing and he picked up two more places in the remaining laps before the red flag to finish 19th.

Either way, this was a positive weekend overall for the 32-year old who gained plenty of dry weather track time and was able to get comfortable on the bike once again.

Not much to say. I want to say well done to Tony for the win. For me the race was OK. We only had a few laps and they were in bad conditions. Starting down the field, it was very hard to see early on and also to find a good feeling on the bike. Then once I started to find a rhythm and pick up some places, there was the red flag. Let’s try to recover for Phillip Island in two weeks’ time. But today didn’t really feel like a race, which is frustrating after the decent progress we showed over the weekend.