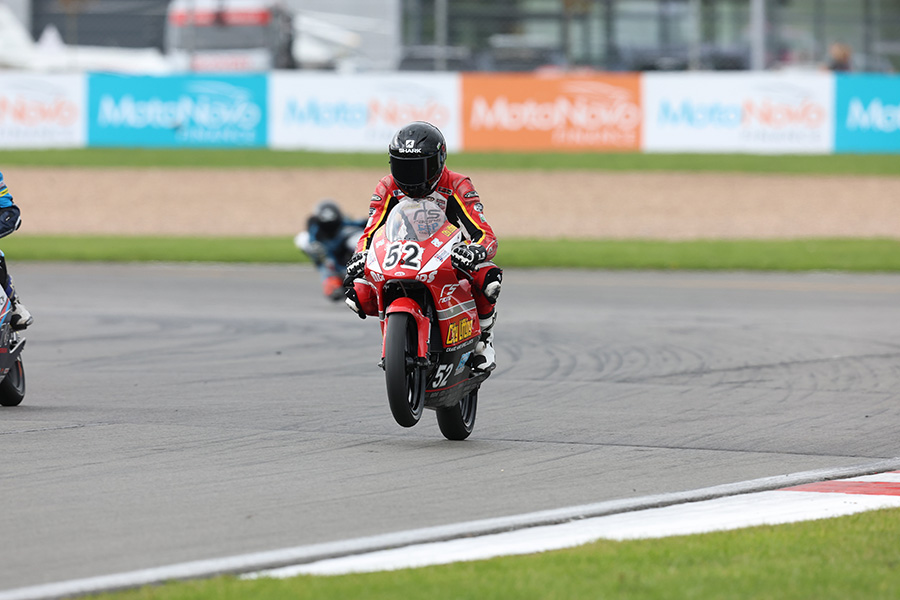 The final race of the 2022 Honda British Talent Cup brought to a close a record-breaking season, with another thrilling race out front. With good weather at Donington Park, the 15-lap duel saw Rhys Stephenson (Rocket Racing) go from pole position, whilst Evan Belford (City Lifting by RS Racing) was keen to for a double, whilst their rivals were just as eager to finish their season in style. Johnny Garness (MLav VisionTrack Academy) was out of action after a qualifying crash on Saturday, so it was always going to be unpredictable. A red flag on Lap 13 brought the season to an early end but it was once again victory for Evan Belford.

Grabbing the holeshot on Lap 1, it was Harley McCabe (MLav VisionTrack Academy) who took the lead but by the end of the first lap, Belford was up front. It was a bright start for Sullivan Mounsey (Wilson Racing/J&S Accessories), whilst Stephenson, Carter Brown (MLav VisionTrack Academy) and McCabe completed the top five. On Lap 2 at the Melbourne Loop, Stephenson momentarily hit the front, but Belford bit back at Turn 12. At the start of Lap 3, the two were side by side, with Lincolnshire rider Stephenson coming out on top. Into the top five by the end of the third lap, Lucas Brown (SP125/Amphibian Scaffolding) set the fastest lap of the race. At the end of Lap 4, the safety car was deployed after a crash for Daniel Goodman (MLav VisionTrack Academy) at the Craner Curves; he was stretchered away but conscious.

The safety car came into the pits at the end of Lap 6, with the race resuming; Belford led the way ahead of Stephenson and Carter Brown, whilst Mounsey and Lucas Brown followed. Crucially, in the battle for third overall in the standings, Harrison Crosby (Banks Racing) was only seventh and needed to get higher up with Stephenson being his main rival. On Lap 8, there was a constant swapping and changing for the lead with Lucas Brown being the latest to hit the front before Mounsey took over, both looking for a first win in the class. On multiple occasions, there were five abreast into the braking zone, but it remained clean and tidy. At the end of Lap 10, Luca Hopkins (SP125/Barnsdale Leisure) crashed but was OK.

In the closing stages, Stephenson set a new lap record and on Lap 12, he made his move at the Foggy Esses to hit the front, before once again, Belford struck back. Carter Brown was then into second at the final corner, with Mounsey into fourth and the front four trying to break away. However, on Lap 13, there was a crash at Craner Curves for Troy Jeffrey (ThorneyCroft56 Racing) and that brought out the red flag, which meant an early end to the race; Jeffrey was conscious and on the stretcher with an ankle injury. With Belford in the lead, he took the double ahead of Carter Brown and Rhys Stephenson. Mounsey took fourth ahead of Lucas Brown, McCabe, Crosby – who took third overall in the standings – and Filip Surowiak (MJL Racing). James Cook (ThorneyCroft56 Racing) and Kiyano Veijer (Microlise Cresswell Racing) completed the top ten.

With it being the final race of the 2022 season and with Garness already taking the title, he finished 104 points ahead of Carter Brown who was second ahead of Harrison Crosby, Stephenson and Lucas Brown. Outside the top five, Harrison Dessoy (Microlise Cresswell Racing/Eastern Garage Racing) finished just one point ahead of Evan Belford, who enjoyed his late season charge after his injury-hit start to 2022. Kiyano Veijer, Ryan Hitchcock (City Lifting by RS Racing) and Matthew Ruisbroek (Microlise Cresswell Racing) completed the top ten. After returning to the Honda BTC, Sullivan Mounsey was 13th overall, just behind McCabe and Julian Correa. It’s been a thrilling year of racing, with five different winners in the class, along with 12 different podium finishers and plenty more stars born and on the road to MotoGP™.

donington
Get All Our Latest News Sent Direct To Your Inbox
Join 30,292 other subscribers.
Follow on Social Media
Get the VROOM Podcast