Fourth for Jake Dixon, 14th for Albert Arenas in curtailed and chaotic #ThaiGP 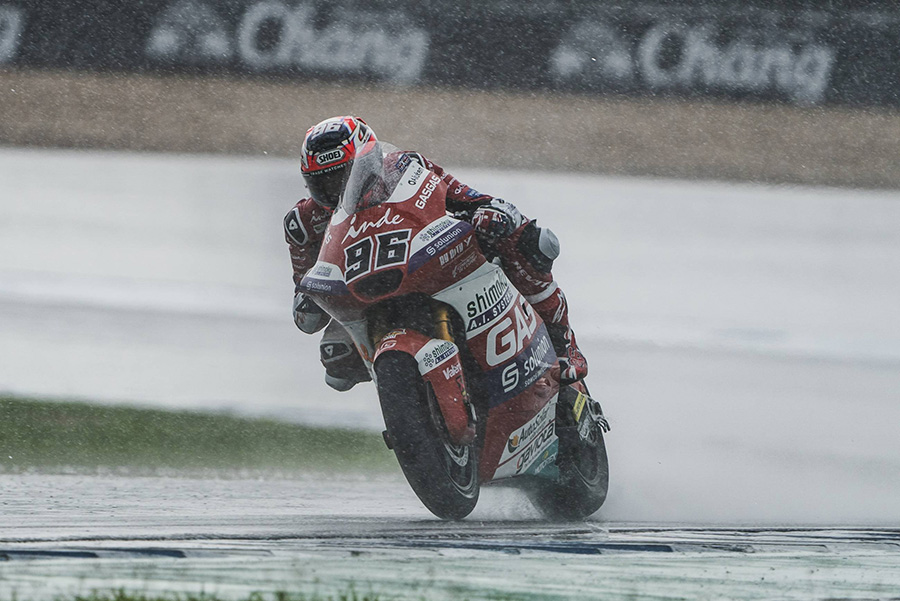 Moto2 race in Thailand was cancelled due to weather conditions. Intermediate class riders started the race and held on for the first few laps but, as the rain became worse, race direction decided to stop the race. After several minutes searching for a solution, it was finally cancelled. As the riders had yet to complete the first two thirds of the race, the positions before the red flag became the final positions and half of the points were awarded. The first three riders before the red flag were Tony Arbolino, Filip Salac and Aron Canet.

Inde GASGAS Aspar riders had a difficult Sunday due to the weather conditions and the heavy rain. Jake Dixon was in the leading group and was fourth when the race was stopped. With this result, he repeats the Japanese GP position and ends the first half of the flyaway races with good feelings. His teammate Albert Arenas started from the back of the grid as his team couldn’t adapt his bike to the track conditions in time. Nevertheless, he did not give up and was able to make a 20-positions comeback to finally finish fourteenth.

4th Jake Dixon (+3.268):
“Crazy race. It was just a matter of survival and I rode well within myself because I wanted to finish. I was close to Canet when the red flag came out so it could have potentially been another podium or maybe more, who knows. The heavier the rain was the less risk I wanted to take. When the bike is aquaplaning along the straight at 150mph it doesn’t matter how much talent you have. Anyway, another solid result and we’ll enjoy the week-off before Phillip Island.”

14th Albert Arenas (1 lap):
“An unexpected race. When we were on the grid and ready with slicks the rain started. Then the race was declared wet it meant we quickly had to change bikes and tires and we had to start last. I did well at the beginning and gained twenty places to be near the top ten but it was hard to see on track and was pretty crazy. Red flag and in the end we could not restart. A new experience, and good to learn how to handle the stress of last minute changes. I really wanted to restart to see where we could finish but, anyway, now a week off and a chance to recharge before we go to Australia.”