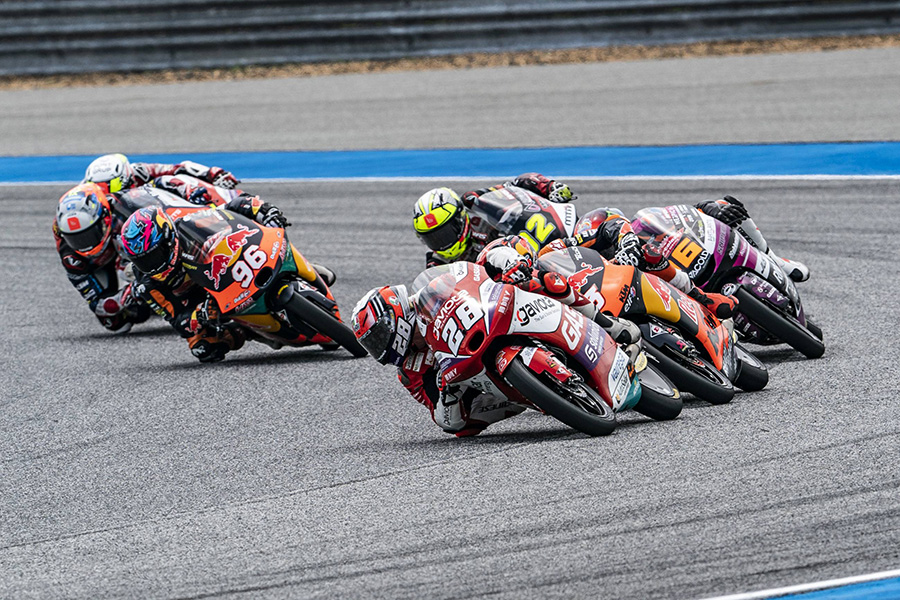 Italian rider Dennis Foggia took the top step of the podium at the Thai Grand Prix after dominating the race from lights-off to the chequered flag. Foggia tried to break away from the start and, together with two other riders, distanced himself from the rest of the field. He was joined on the podium by Ayumu Sasaki and Riccardo Rossi. With this victory, the Italian rider moves up to second place in the overall standings and is now 49 points off the leader with three races to go.

The Gaviota GASGAS Aspar Team riders gave their all on the Buriram track. Izan Guevara, who finished the race in fifth position, tried to follow the leading group to avoid a breakaway, but it wasn’t possible. The Spanish rider climbed up seven positions to lead the chasing group, getting to fourth. With one lap to go, Gaviota GASGAS Aspar rider was taken off the track and lost a position. Despite the difficulties, Guevara saved the situation and could be champion at the Australian Grand Prix. His teammate, Sergio García Dols, was unable to avoid Adrián Fernández and crashed on the first lap. The incident hadn’t physical consequences, the Spanish continued in the race in case it was stopped, but with six laps to go, García Dols entered the pits and retired.

5th Izan Guevara (+9.527):
“It was a very tough race. I struggled to control the bike and I was physically tired. I had a good start and I felt good, but it was impossible to get to the front group. We stayed in the second group and tried to fight for a good position. I think that, after a tough weekend, we were able to save the situation. In Australia we will have the first match point and we will face it in the same way we always do.”

Sergio García (DNF):
“I don’t know what to say. I tried to do my race and comeback step-by-step but it barely lasted a lap when someone crashed into me and that was it. I know things like this can happen but it is still hard to accept. I went back out to see if there was anything to salvage but it was just to ride around in the end so not worth it. Forget this one and think to the next one.”