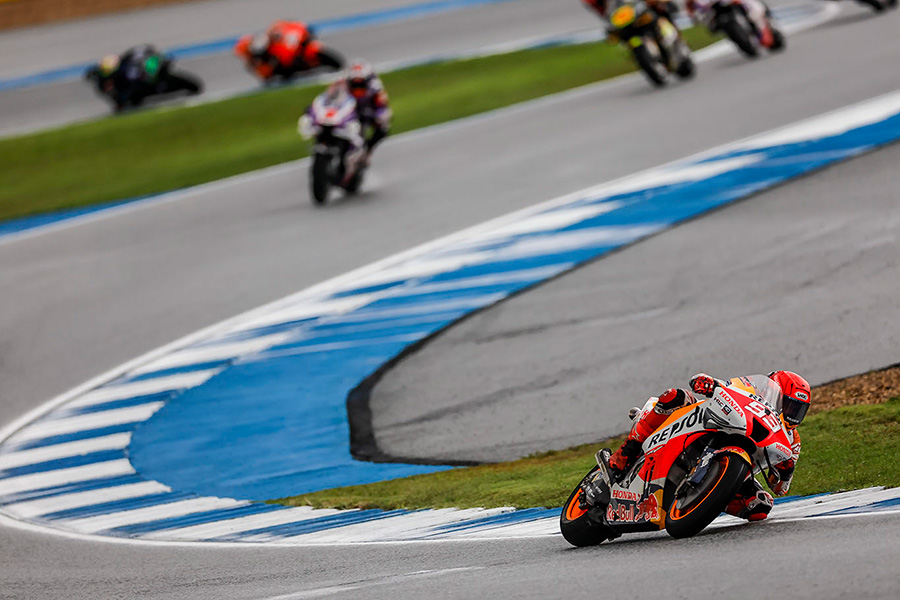 The Thai Grand Prix race started late due to the intense rain that began to fall at the beginning of the Moto2 contest, and that would not stop until the MotoGP race got underway.

Marc Márquez, who was eighth on the grid, made a great start to climb positions. The Repsol Honda Team rider was fourth halfway through the race, competing for third place with Francesco Bagnaia.

In the end, due to a small mistake made during an overtaking move, he would place fifth, earning 11 points.

Pol Espargaró also made progress in Buriram. The Repsol Honda Team rider started the seventeenth Grand Prix of the season from 19th on the grid and, during the course of the 25 lap race, rode a consistent pace.

Márquez is thirteenth in the overall standings with 84 points. Espargaró is seventeenth with 49.

“I am happy with the race overall, I was again able to do a solid race – avoiding mistakes and staying calm at the start. Wet races are always very long so you need to be careful. Then I was feeling better and I gained time on the group ahead but it was impossible to overtake Bagnaia. The acceleration of the Ducati is very strong. We keep on working and trying to improving everything, it has been a good weekend where we were competitive in the wet and the dry. Now we have a week off to recover a bit and keep on training to be strong for the final three races of the year.”

“It was a long and tricky race in the wet. It’s clear the Honda has more potential in it because you can see what Marc is doing. He’s maybe riding in a different way but I am still struggling a lot with edge grip. We were able to make up some places in the wet and score some more points, but this is not what I am aiming for and we need to improve for the final races.”

#ThaiGP
Get All Our Latest News Sent Direct To Your Inbox
Join 30,271 other subscribers.
Follow on Social Media
Get the VROOM Podcast
Download our Vroom.GP App