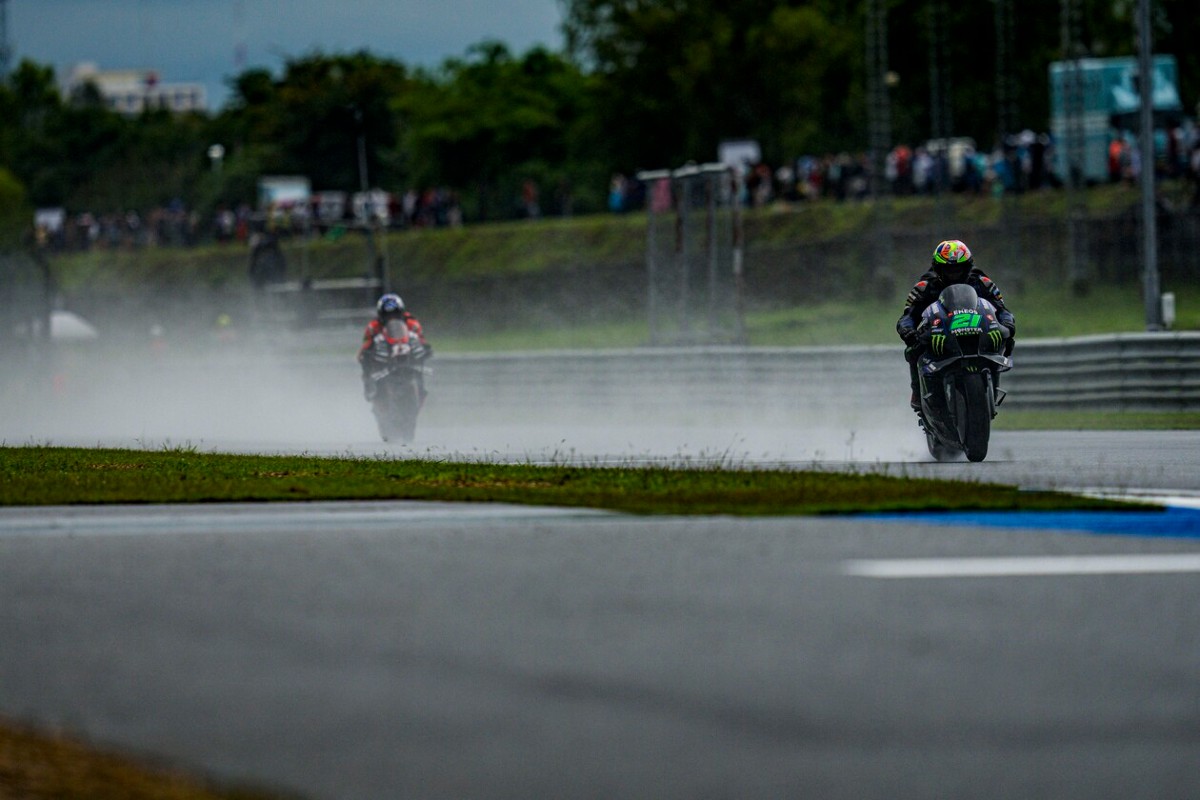 Monster Energy Yamaha MotoGP‘s Franco Morbidelli enjoyed battling for a spot inside the top 10 at the very wet Chang International Circuit. Following a three-second penalty after the chequered flag, he holds 13th place in the Thailand Grand Prix race results. A nightmarish first lap evaporated Fabio Quartararo‘s hopes for a strong result in Buriram. He ended the race in 17th place.

Morbidelli had a solid opening lap. There was little to no visibility due to the spray, but he defended his P14 starting place well and held his position crossing the finish line for the first time. The Italian found a good balance between pushing hard and not going over the limit. While other riders got caught out by the tricky conditions and bumped into each other in the busy pack, he made strides, moving up to 12th in lap 5.

The Yamaha man kept riding a feisty race, climbing up as far as ninth place by lap 12. He was aiming to reel in Enea Bastianini ahead of him but had to switch from offense to defence in the final five laps because of a charging rider. Morbido lost a few positions due to tyre degradation and the track conditions getting more mixed as a drying line started to form. He took the chequered flag in 12th place but was handed a three-second penalty after the race, that saw him drop to 13th, 22.439s from first.

Quartararo had to endure a long wait before the start of the 25-lap race because of the extremely wet track conditions, and another delay was added due to a medical emergency on the starting grid happening closely beside the Yamaha man. Once the race got under way, he had a solid start from P4, but was pushed wide by Jack Miller in Turn 1. He tried to regain his composure, but a wobble in Turn 4 cost him additional places. He completed the first lap in 17th position.

The Frenchman kept his head down but didn’t find a good feeling. Though he managed to get in a few overtaking manoeuvres, he wasn’t able to climbed higher than 17th place in the end, crossing the finish line 34.072s from first.

After today‘s race, Quartararo‘s lead in the championship standings is now 2 points, with a 219 points total, while Morbidelli remains in 19th, this time with 31 points. After Round 17, Yamaha are third with 224 points in the Constructor championship, and Monster Energy Yamaha MotoGP place fifth in the Team championship with 250 points.

The team will enjoy one week off before travelling to Australia for Round 18, held at the Phillip Island Circuit from 14-16 October.

The first ten laps of the race were probably the scariest experience of my life. The visibility was none. But thankfully everybody was wise enough to not do any crazy moves or try crazy stuff in the areas where visibility was zero. The first ten laps went through with nothing much going on. That was really surprising, but also a relief. After that, the real race started. I could extract some pace from my package, and I was quite fast actually. But when I reached other bikes, I couldn’t overtake or do much more, so I needed to step back and bring the bike home.

Rain fell at the worst possible time for us. We had not much wet track time before the race started – just a few minutes. The first laps of the race were really tricky. I was pushed wide by Jack in Turn 1 and it only got worse from there. I was trying to find a good feeling, but in Turn 4 I had a moment, and the visibility was really bad. I’m sorry for the Thai fans. I had hoped to do a better race in front of them. We have an idea why we struggled that much, but we will investigate more to improve for the future. We’ll try to come back stronger in Australia.