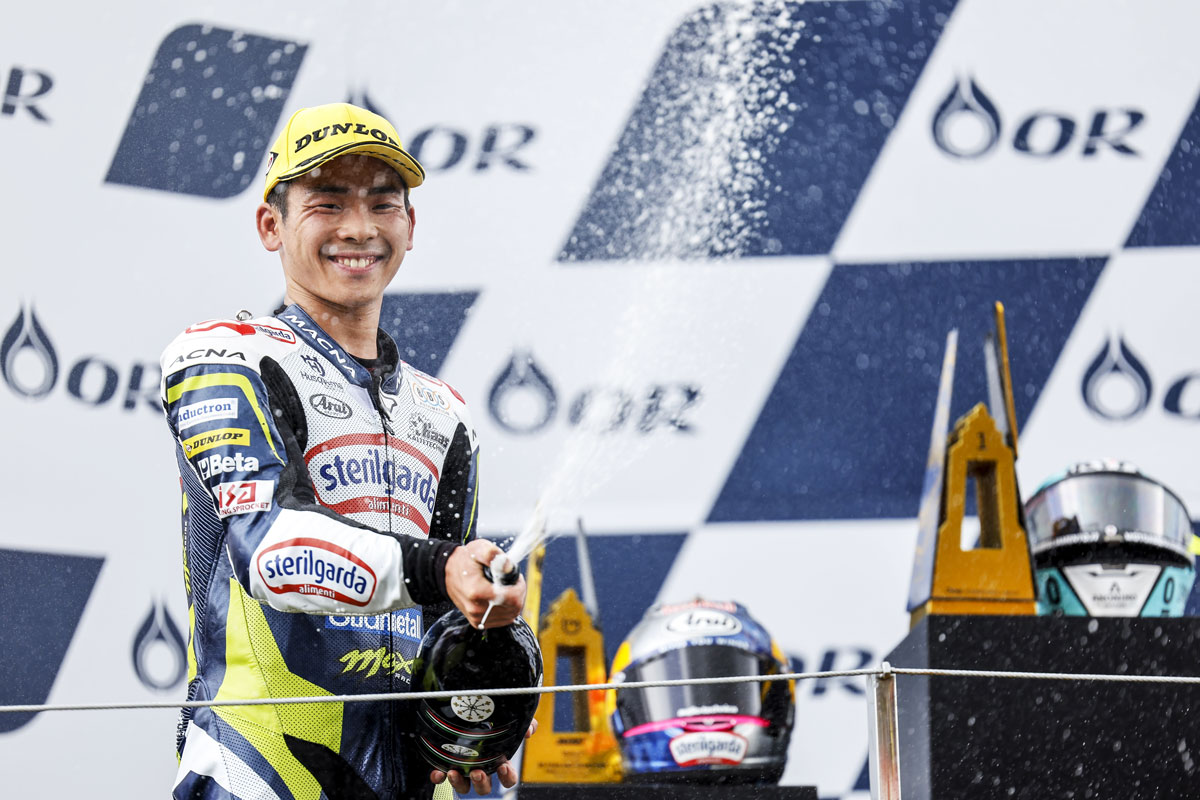 The spoils of these last three consecutive races for Ayumu Sasaki is simply impressive. In fact, in the last three races Ayumu got two seconds and a third place, thus reaching eight podiums total. It’s a world-class roadmap, in fact only the blindfolded goddess has taken away the opportunity to fight for the final victory of the world championship. Even today Ayumu had a perfect race reading. After passing fourth at the first corner, after a few meters he recovered the second position. Soon a small group of four drivers, of which he was one, took a fair distance from the rest of the group.

In the rest of the laps Ayumu has always defended with great force his second position, but he did not have the necessary momentum to overcome the leader of the race. On few occasions he found himself in front of him and this happened for a few meters. Today the second place was the best possible result, and, in this perspective, it was great to defend the second position at the last corner of the last lap, when with a perfect trajectory he resumed the position, passing the finish line solo. There are still three races before the end of the championship, including the next in Australia.

John McPhee today unfortunately failed to collect points however. After a few laps from the start he slipped in turn 5, losing the front. John came from a series of five points races and today he started very well, so it was a disappointing outcome for the Scottish rider. In this latest weekend with the team, he also managed to improve the feeling with his Husqvarna, obtaining excellent performances during the sessions before the race.

AYUMU SASAKI :
“I am happy with the race today, I managed to finish on the podium again and it is three races in a row. I am very happy, but it was not enough for a win today, but I did my best and finished second. We know what we are lacking and we know where we have to improve to win the race. We have three more races to try to win, so I will keep focusing, I will keep trying, and can’t wait to ride in Australia after three years.”

JOHN MCPHEE :
“It is a real shame to finish the Thailand GP with a crash in the race. I was pushing hard and unfortunately with this came a crash in turn 5, where I lost the front. I am sorry to my guys for this, the crash is my mistake. I felt strong on the bike, but unfortunately we were losing some speed in the straights, so I was forced to work extra hard in the areas where I felt good, to try and pass the riders back again. In the end it was not meant to be today. Consistency is something that we had a lot this year, but we have just been missing a little bit of speed, so today I pushed a 100% and unfortunately this was the outcome. Now we will take the speed we have and move on to Phillip Island where I hope we can have finally some good results.”

#ThaiGP
Get All Our Latest News Sent Direct To Your Inbox
Join 30,271 other subscribers.
Follow on Social Media
Get the VROOM Podcast