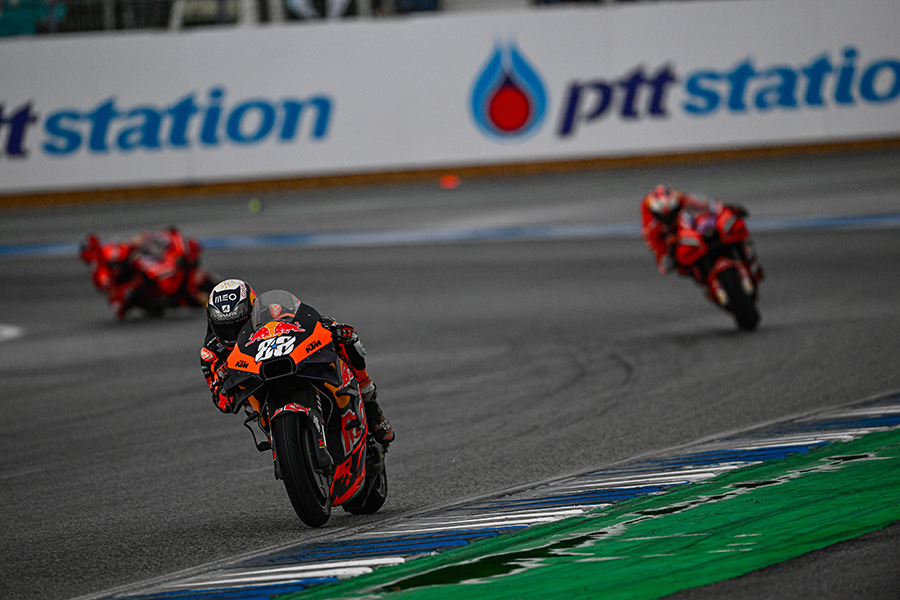 After two mistakes in Japan looked to have changed the fabric of the title fight, an even more dramatic day at the OR Thailand Grand Prix turned everything back on its head. At the front, a stunning wet weather win from Miguel Oliveira (Red Bull KTM Factory Racing) saw him impress in difficult conditions once again, with Jack Miller (Ducati Lenovo Team) for close company and just seven tenths off at the flag. Behind the two came the first fully wet premier class podium for Francesco Bagnaia (Ducati Lenovo Team), and those 16 points may well be the biggest scored for some time.

Oliveira may have had flashbacks of Lombok, but Fabio Quartararo (Monster Energy Yamaha MotoGP™) didn’t. That podium pace was nowhere to be found on a tough day in Thailand, with the Championship leader simply failing to score as he crossed the line in 17th place. An 18-point advantage accrued after Japan is now just two points – and Quartararo’s race was also a saving grace for Aleix Espargaro (Aprilia Racing).

A tough qualifying made way for a tough start to the race, and then the number 41 also made contact with Brad Binder (Red Bull KTM Factory Racing) and sent the number 33 well wide. For his trouble, Espargaro was given a Long Lap, compounding a tougher Sunday afternoon as he managed to come back to 11th. Still, with Quartararo’s struggles, the number 41 is closer – it’s only 20 points covering the top three riders.

The race itself saw polesitter Marco Bezzecchi (Mooney VR46 Racing Team) start well from pole and then head wide with Jorge Martin (Prima Pramac Racing), and from there on it became the Miller show for some time. Slowly but surely, however, Oliveira was making progress – and around half distance the Portuguese rider struck and made it stick.

Miller wasn’t dropped, but the Australian couldn’t quite find a way back through and was forced to settle for second as Bagnaia dug deep just behind. First holding off Marc Marquez (Repsol Honda Team) and then a late-charging Johann Zarco (Prima Pramac Racing), Pecco’s first fully wet podium couldn’t have come at a better time.

Zarco played it safe with the factory’s fate in mind and took less risk to take fourth, with Marquez completing the top five. Enea Bastianini (Gresini Racing MotoGP™) was next up but a little way back from the breakaway top five, with Maverick Viñales (Aprilia Racing) taking seventh ahead of a solid Sunday for Alex Marquez (LCR Honda Castrol). Martin faded back to ninth, with Brad Binder completing the top ten after that early excursion, and finishing just ahead of Aleix Espargaro.

Alex Rins (Team Suzuki Ecstar) is classified ahead of Franco Morbidelli (Monster Energy Yamaha MotoGP™) after the latter was given a +3 second penalty for track limits without the time to take the Long Lap, with Pol Espargaro (Repsol Honda Team) and Raul Fernandez (Tech3 KTM Factory Racing) completing the points. Bezzecchi faded from a fabulous start to miss out on scoring by the end of play, coming home just ahead of Quartararo.

And so a dramatic, pivotal and adjective-heavy day at Buriram comes to a close, and with it the triple-header. With only three races to go there are two riders in two points, three riders within 20 and five within 40 points… the last of those being Miller as the man in form heads back onto home turf.

Tony Arbolino (Elf Marc VDS Racing Team) pitched it to perfection in torrential conditions in Thailand, with an eight-lap race Red Flagged and half points awarded. The Italian just got past Filip Salač (Gresini Racing Moto2™) after the Cezch rider ran wide when the race was called, giving victory after an impressive charge. Salač still takes his first Moto2™ podium in second, with Aron Canet (Flexbox HP 40)completing the podium after an absolute stormer of a first lap.

There was early heartbreak for polesitter and home hero Somkiat Chantra (Idemitsu Honda Team Asia) as he crashed out of the lead, but there were no such dramas for teammate and Championship challenger Ai Ogura. The Japanese rider finished a solid sixth and right ahead of points leader Augusto Fernandez (Red Bull KTM Ajo), making the gap between the two now just 1.5 points.

Jake Dixon (Inde GASGAS Aspar Team) took fourth, close on the chase behind Canet, with Alonso Lopez (Beta Tools SpeedUp) in a little space in fifth ahead of the top two in the title fight.

The OR Thailand Grand Prix belongs to Dennis Foggia (Leopard Racing) as the Italian put in another impressive and imperious performance at the front, eventually taking the flag with a little breathing space as the rain held off for the lightweight class at Buriram.

Ayumu Sasaki (Sterilgarda Husqvarna Max) came home second as he and Riccardo Rossi (SIC58 Squadra Corse) duelled it out for the podium, with the Italian going for a final corner lunge and overcooking it, but overjoyed to take back to the Grand Prix rostrum.

Foggia led from early doors, with Sasaki trying to get on the chase but initially needing a little time to get through into, and keep, second. Once he did, he and Foggia were joined by Rossi in a breakaway at the front, with the second group left to fight it out for fourth.

The field now has a weekend off before the paddock heads to Phillip Island, with Guevara facing down his first match points. 49 clear, if it’s over 50 he’s wrapped it up.