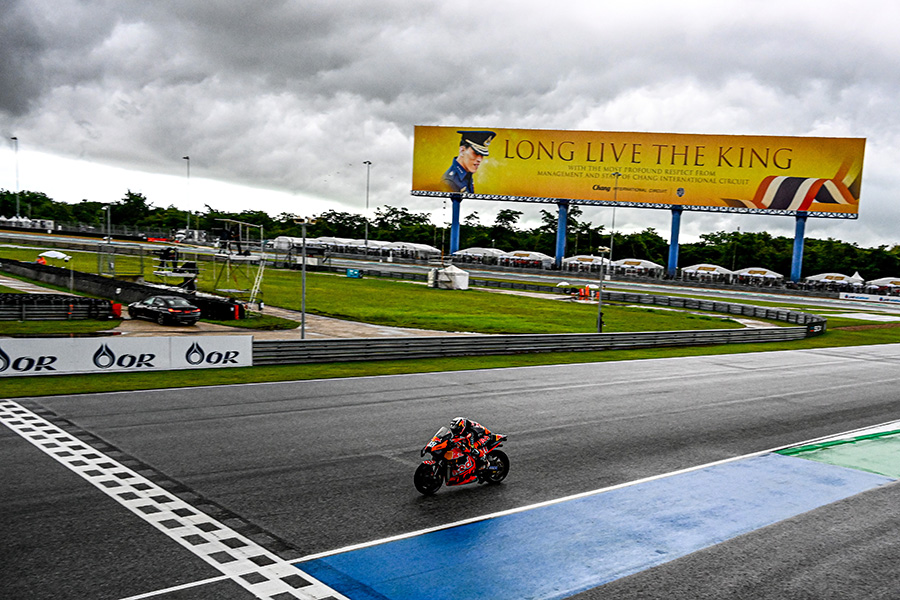 And you may find yourself living in a shotgun shack…..
……And you may ask yourself, “Well, how did I get here?”

Probably on an arse-achingly long flight to be honest. The Thailand Grand Prix is certain for a few things, one of them is being a long way away from the bunker and one of them is rain. Wetter than a young conservative (now hang on a second; nothing’s that wet – Ed), yet happier than Boris Johnson in a brothel. What a country!

The hors d’oeuvre and amuse bouche before the main course of MotoGP had been truncated, delayed and made absolutely nuts by the addition of rain. And the main race was delayed by almost an hour as the gods of many unleashed their precipitation on all and sundry. Rain is no bad thing: it brings life and washes away the detritus no-one wants (errr…. Where is this going? – Ed) whilst at the same time making MotoGP races a little bit different and adding a soupçon of randomness. Well, that’s how it works for us viewers. For the riders and teams, it must be a wet pain in the backside. The whole of the weekend had been dry right up until Sunday morning and then, down it came.

How many plans did this screw up? Well pretty much everyone’s. Bez was on pole, but that just fell apart quicker than a rice-paper umbrella in a thunderstorm. He ran wide in the first lap, race direction deemed he’d gained an advantage, and boom, he had to drop a place. Like the old Jimmy Sommerville stunt-double, Brad Smith, once he slipped a place, Bez seemed to think he’d make a go of it and slip a load more places. It’s the hope that kills you in the end. Dr. Bez wasn’t the only rider to cop the cliched and proverbial ‘mare. Stepping up to the plate was super-fast, super smooth Frenchie (bonjour mes amis) Fabio (minus the Groove Rider**) Quartararo. He too had a desultory race. Fourth on the grid, by the end of the first lap he was 17th. From having a second world championship firmly grasped with one hand and 4 fingers, he now seems trying to toss it over to Pecco Bagnaia. Talking of Ducati, Miller took the lead on the fourth lap and although Australia is mainly a lot of desert, Jack-eroo looked like he’d been riding on a wet track for years.*** On the very same lap that Miller took the lead, Oliveira pinged his first fastest lap of the race. Ominous.

But what of Marc and ‘Onda? Well, you may as well just ask what of Marc, because the rest of the ‘Ondas nearly sank without a trace. Their saving grace was the Alex. It’s fair to say we’ve dumped on Alex from a considerable height for a considerable number of years. No doubt he’s a great rider and an inordinate human being. Of that there can be no argument, it’s just that Marc said Alex was the quicker of the two (he’s not and that’s the funny bit). Anyway, Alex shot up through the field like a user in a Glasgow back street finishing 8th whilst his near-fully fit brother finished 5th.

Whilst Oliveira caught Miller on lap 8, he wasn’t foolish. Anyone could see he was the fastest of the two let alone of the entire field, but the Portuguese rider held on for a further 8 laps before easing it up the inside of the Aussie. From that point on he wasn’t going to be bested.

Want to know how bad it was for Fabio? Franky was the only Yamaha to score points. Ouch.

Oh, Danilo was back. After hitching his horse to a KTM desert muncher and making most of the Dakar pros look like amateurs, Petrucci head westward ho and (hopefully) milked a wheelbarrow load of dollars from AMA. Once that was finished, Danilo picked up Mir’s injury-induced vacancy and jumped on the spare Zook. Many a pundit thought he do well in the rain, but although it’s not his first rodeo, it’s also a lot tougher than it looks. He finished a creditable 20th. And onto WSBK we think.

As for the other Frenchman, J-Z, he just got quicker and quicker until he passed Marc and looked an odds-on certainty to zip past Pecco Bagnaia. But J-Z is no fule. A certain guess that whatever rider bonus he would get for being 3rd instead of 4th would be paid for by the Ducati factory team thus allowing Pecco to keep as many points as possible (an extra 3 for finishing 3rd not 4th) allegedly/didn’t at all slow him in the closing laps.

*Sorry we’ve missed the last couple of races; we’ve been in France trying to work out how Quat and Zarco are so fast. And yes! We’ve found their secret, but if we told you, it wouldn’t be a secret anymore. Let’s just say, “escargot”.

**A reference for the older ravers reading.

***Yeah, we spotted the euphemism too

#ThaiGP, humour
Get All Our Latest News Sent Direct To Your Inbox
Join 30,271 other subscribers.
Follow on Social Media
Get the VROOM Podcast
Download our Vroom.GP App