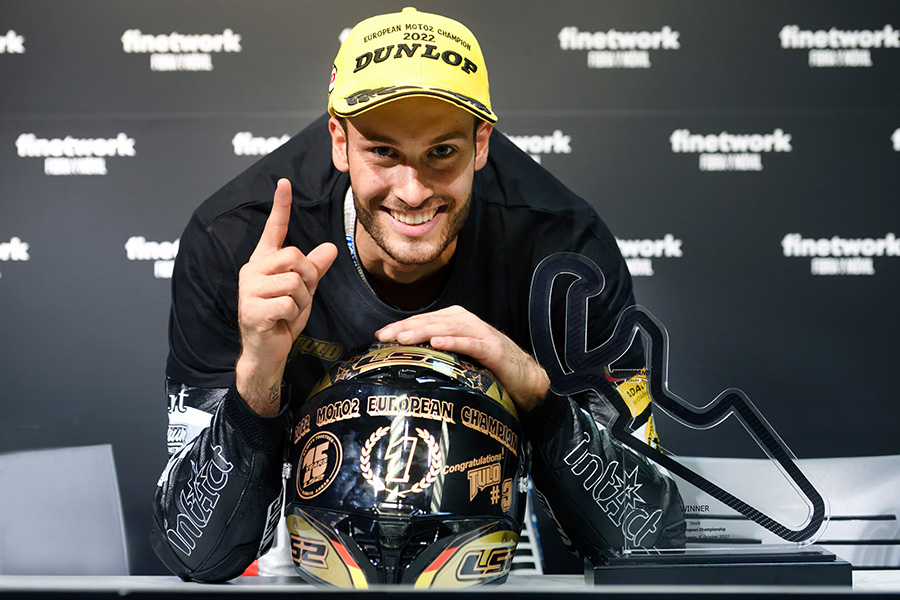 It was a day where a dream came true for Lukas Tulovic (Liqui Moly Intact GP Junior Team) after the German secured the Moto2™ European Championship title thanks to victory in Race 1 at MotorLand Aragon. The Hawkers European Talent Cup title race goes onto Valencia after Guido Pini (AC Racing Team) and Casey O’Gorman (VisionTrack Racing Team) picked up the wins, while Colin Viejer (AGR Team) converted pole position into 25 points in the only Finetwork FIM JuniorGP™ World Championship race of the day.

In the sole JuniorGP™ outing of the day, Veijer held off David Salvador (Laglisse Academy) and reigning Champion Jose Antonio Rueda (Team Estrella Galicia 0,0) for his second win of the season. Salvador’s P2 was his best result of the year as the Spaniard strengthen his grip on P2 in the overall standings, while Rueda kept up his phenomenal podium fun of nine in 10 races with third place.

After keeping his 100% pole position record intact on Saturday, and with Alex Escrig (Yamaha Philippines Stylobike Racing Team) absent through injury, Tulovic knew a race win would hand him the 2022 Moto2™ European Championship crown. The 22-year-old made no mistake to win the opening race of the day from lights out to chequered flag in dominant fashion, as he then went out in Race 2 and repeated his superb performance to leave Aragon with two more victories and a European title to his name. Senna Agius and Promoracing teammate Xavier Cardelus claimed P2 and P3 respectively in both races in Aragon to signal a strong weekend for both riders and the team. In the Stock class, Dani Muñoz (Fifty Motorsport) and Juan Rodriguez (Cuna Campeones) shared the wins in Aragon.

The other title that could have been won at the penultimate round was the Hawkers ETC, but that battle is heading to Valencia. Pini emerged victorious for the first time in 2022 in Race 1 after edging out Maximo Martinez (Team Honda Laglisse) at the final corner, as Brian Uriarte (Team Estrella Galicia 0,0) picked up the final podium spot in the red flagged encounter. In Race 2, a fascinating five rider duel played out and again, it all came down to the final lap. This time, O’Gorman won the race to the line by just 0.008s to snatch his maiden Hawkers ETC win, as the Irishman fended off Pini in P2 and Joel Esteban (Aspar Junior Team) in P3. Heading to the final race of the season, Pini leads the title race by three points from Esteban.

Next up is a trip to Valencia at the end of October for the final four races of the 2022 campaign, with the Hawkers ETC title still up for grabs.

aragon
Get All Our Latest News Sent Direct To Your Inbox
Join 30,292 other subscribers.
Follow on Social Media
Get the VROOM Podcast