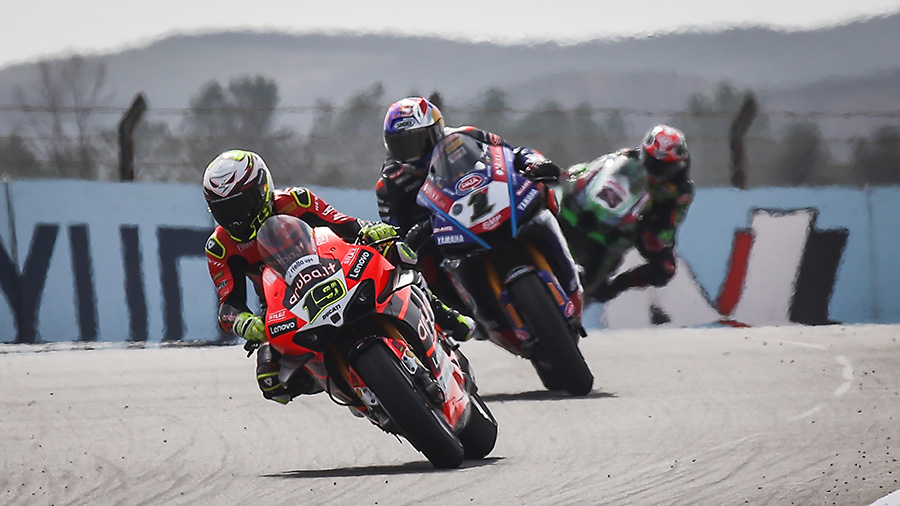 Race 2 in the MOTUL FIM Superbike World Championship was won by Alvaro Bautista (Aruba.it Racing – Ducati) after a thrilling scrap at the Autodromo Internacional do Algarve during the Pirelli Portuguese Round. The Championship leader had to battle with both Toprak Razgatlioglu (Pata Yamaha with Brixx WorldSBK) and Jonathan Rea (Kawasaki Racing Team WorldSBK) in order to take his first win of the weekend and extend his Championship lead.

As the final third approached, Razgatlioglu set about closing in on Bautista and made a move on the Championship leader at Turn 13 on Lap 14, but, at the start of the next lap, Bautista was able to pass the reigning Champion down the pit straight to re-take the lead. From there, Bautista was able to open up a gap of over two seconds to Razgatlioglu as he took his 28th win, all on Ducati, as he goes level with Chaz Davies for wins with Ducati in WorldSBK and the 12th of his 2022 campaign.

It also gave Bautista his 24th podium this season, equalling his best season record from his rookie season in 2019. Razgatlioglu claimed his 75th podium which puts him level with Colin Edwards and Marco Melandri at ninth in the all-time list of WorldSBK podiums, while Rea took his 236th podium in WorldSBK and his 24th at Portimao; putting the Portuguese venue level with MotorLand Aragon at the circuit where the six-time Champion has the most podiums.

Michael Ruben Rinaldi (Aruba.it Racing – Ducati) took fourth place after starting the race fighting over the podium places but losing ground as the race progressed. Rinaldi had to battle with Alex Lowes (Kawasaki Racing Team WorldSBK) with the British rider claiming fifth spot, only 0.573s down on Rinaldi, as Lowes took his third top-five finish of the Portuguese Round. Andrea Locatelli (Pata Yamaha with Brixx WorldSBK) rounded out the top six as he finished in sixth place, but almost seven seconds down on Lowes after 20 laps.

Scott Redding (BMW Motorrad WorldSBK Team) took seventh place as he battled his way up the order, finishing just under a second clear of Xavi Vierge (Team HRC).At the halfway point of the race, Redding was battling with Iker Lecuona (Team HRC) but a crash for Lecuona at Turn 14 dropped him down the order to 22nd place, where he finished. Garrett Gerloff (GYTR GRT Yamaha WorldSBK Team) was ninth, three tenths behind Vierge, although he was able to get the better of his 2023 teammate, Loris Baz (Bonovo Action BMW) as the Frenchman rounded out the top ten.

Philipp Oettl (Team Goeleven) was another rider who was in the battle with Gerloff and Baz, with the German rookie finishing 0.291s behind in 11th place. Michael van der Mark (BMW Motorrad WorldSBK Team) was unable to convert his third-row start into a top-ten finish as he took 12th place, ahead of Luca Bernardi (BARNI Spark Racing Team). Bernardi, who will finish the 2022 season in WorldSSP, secured points on his last WorldSBK race of the season with 13th, as did Roberto Tamburini (Yamaha Motoxracing WorldSBK Team) as he took 14th place. The final point went to two-time American Superbike champion Jake Gagne (Attack Performance Yamaha Racing) who finished in 15th place on his return to WorldSBK.

Eugene Laverty (Bonovo Action BMW) rounded out his ‘home’ round, as Laverty lives in Portugal, just outside the points with 16th place. Wildcard Marvin Fritz (IXS – Yart – Yamaha) was 2.3 seconds down on Laverty in 27th place, while Christophe Ponsson (Gil Motor Sport – Yamaha) and MIE Racing Honda Team duo Hafizh Syahrin and Leandro Mercado rounded out the top 20. Ponsson, Syahrin and Mercado were separated by just a few tenths at the end of the race. Kohta Nozane (GYTR GRT Yamaha WorldSBK Team) was 21st ahead of Lecuona and Oliver Konig (Orelac Racing VerdNatura) who was the last classified rider.

#PRTWorldSBK
Get All Our Latest News Sent Direct To Your Inbox
Join 30,292 other subscribers.
Follow on Social Media
Get the VROOM Podcast