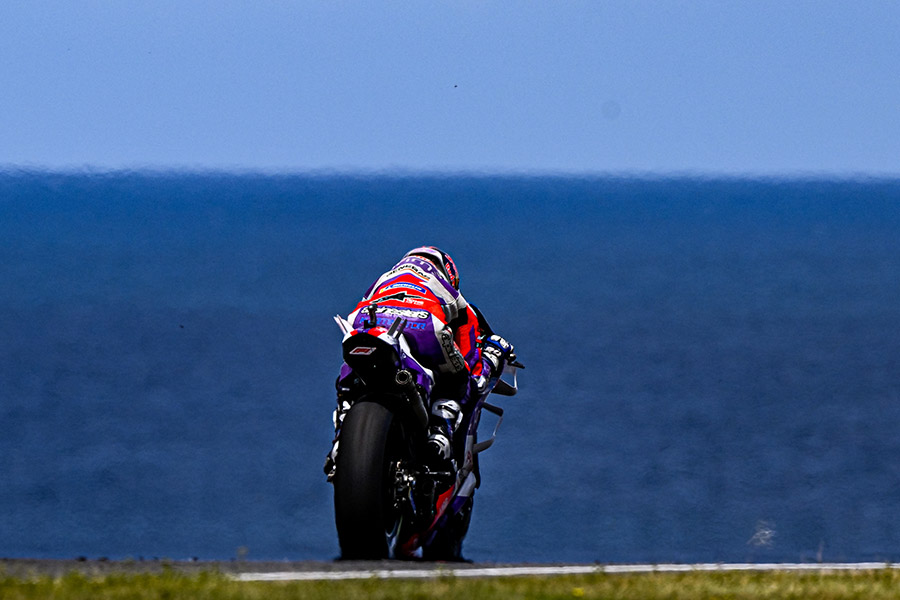 Since 2013, MotoGP™ Legend Jorge Lorenzo has been the fastest rider ever to lap Phillip Island, but no more. Jorge Martin (Prima Pramac Racing) is the new all-time lap record holder at the Australian track, and by a mere smidge as Marc Marquez (Repsol Honda Team) missed out by just 0.013. The number 93 also had a helping tow from Francesco Bagnaia (Ducati Lenovo Team) as the two lapped in tandem, with Pecco just pipped to it but still completing the front row.

Martin had been on the pace as soon as Q2 started, punching out a 1:28.112 out the gate – the fastest lap of the weekend to that point. He would hold onto that honour for just a lap as Bagnaia clocked a 1:28.054 next time through, and they were the top two at the end of the opening runs, with Fabio Quartararo (Monster Energy Yamaha MotoGP™) third on a 1:28.174. Marc Marquez sat fifth on a 1:28.313, having been forced into one of his trademark front-end saves exiting ‘MG’ on his second flying lap which saw him veer onto the grass.

With the second runs on in earnest, Johann Zarco jumped to the top with a 1:28.007 before Martin made it a Prima Pramac Racing one-two with the first lap of Phillip Island that was quicker than Lorenzo’s 1:27.899 in 2013.

Marquez then tagged on behind Bagnaia for the final few minutes of the session, and with the chequered flag about to come out, the number 63 moved up to second on a 1:27.953 but was beaten almost immediately by the Honda rider in his slipstream, who set a 1:27.780. That made for a top four of Martin, Marc Marquez, Bagnaia, and Aleix Espargaro (Aprilia Racing), with Quartararo edging back up to fifth thanks to a 1:27.973 on his final lap.

When all’s said and done, Bagnaia is the first of the title contenders as a few stack up from third back, with Aleix Espargaro heading Row 2 in fourth and Championship leader Quartararo right alongside. Quartararo was the final rider in the 1:27s, with Zarco just into the 1:28 bracket. Luca Marini (Mooney VR46 Racing Team) slots into seventh.

It was a tougher session for Jack Miller (Ducati Lenovo Team) as he’ll start eighth – although he did win from seventh at Motegi. For fellow challenger Enea Bastianini (Gresini Racing MotoGP™) it was an even tougher one, however, as the number 23 was in Q1 and then failed to make the cut – after also getting held up by Miguel Oliveira (Red Bull KTM Factory Racing). The Portuguese rider did a practice start too early and then was slow on the line, gaining a three-place grid penalty and a Long Lap.

Qualifying didn’t go to plan for Maverick Viñales (Aprilia Racing) and he’ll start P12. After topping the timesheets in FP4, ‘Top Gun’ will certainly be ready to move forward on race day.

With five riders in 40 points, there’s more and more at stake as the time to make a comeback gets shorter and shorter. Just three races now remain, and the first of those is sure to be a stunner as Phillip Island hosts for the first time since 2019.

After 17 races in the intermediate class, just 1.5 points separate Fernandez and Ogura with three rounds remaining.

Another week, another new lap record! This time it’s Ayumu Sasaki (Sterilgarda Max Racing Team) as the number 71 backed up his fastest lap on Friday with the fastest lap of Phillip Island ever, taking pole by nearly two tenths and putting in the only 1:35. Sergio Garcia (Gaviota GASGAS Aspar Team) is the only other rider in Sasaki’s postcode, and he has a half-second gap behind him back to Ivan Ortola (Angeluss MTA Team) as the rookie completes the front row.

Championship leader Izan Guevara (Gaviota GASGAS Aspar Team) heads up Row 3 in seventh place, giving him a reasonable launch position ahead of his first match point in the fight for the crown. He has an advantage of 49 points and needs more than 50 by the flag on Sunday to secure the Championship. Dennis Foggia (Leopard Racing), now his closest challenger, lines up in P12 on Row 4 – his equal worst result of the season as he failed to improve late on.