A win for Alex Rins in Australia, 18th for Joan Mir 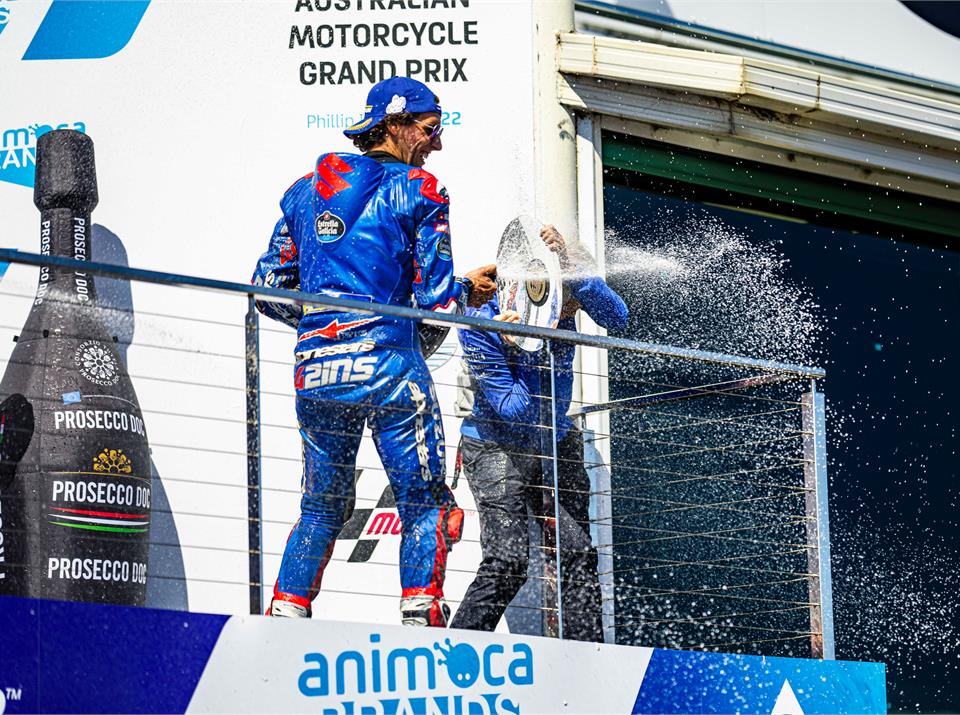 The entire paddock was desperate to get back on track in Australia after the long hiatus caused by the pandemic, and Phillip Island didn’t disappoint as it offered up one of the most thrilling races of the season – one which gave Suzuki a superb win in the hands of Alex Rins.

A tense start to the race saw Rins deep in the field but battling through to eighth in the early laps, and before long he set the fastest lap of the race, slotting into fifth place by Lap 6.

His progression continued to impress while the pack closed in around him; for three laps in a row Rins made slick and well executed passes at the Southern Loop section of the circuit, bringing him into a podium position by the eighth circulation.

On Lap 14 Rins charged to the head of the race, and from there on out he battled hard to both attack and defend. It was far from an easy task with just 1.8 seconds covering the first 10 riders, but Rins was feeling confident and carrying great corner speed on his GSX-RR. The Suzuki squad held their breath as their rider refused to give up, despite slipping to third with three laps left. Two more sensational passes at the Southern Loop plunged Rins back into the lead before the chequered flag and he took his fourth MotoGP career win – now completing the set having also won here in Moto3 and Moto2.

Joan Mir had a more complicated race. After starting well and climbing into ninth, he struggled with tyre pressure problems caused by a fault with the manometer. He tried hard to stay in the points but slipped to 18th by the line.

“I’m super happy! During the race I was feeling pretty good, in fact my feeling with the bike was amazing. The pace was fairly slow to try and preserve the rear tyre, because we know this place can be tough on tyres. But in the end, I was able to find some good traction in the sweeping corners and this allowed me to gain places and feel strong until the end – we had a fantastic battle all together! The entire team and everyone who has worked on this project deserves this win, and so do the fans, I’m so pleased that I could celebrate another victory together before we depart.”

“On our side of the garage it’s been a very disappointing race. There was a problem with the manometer which meant that the tyre pressures were out, and this caused me to drop backwards. I practically couldn’t finish the race, but I just managed to. It’s a sad comeback for me, but I’ll do my best in the last two races and hope for some better luck. On the other hand, I’m so happy for the team and Alex, because a victory here in Phillip Island is something very special.”