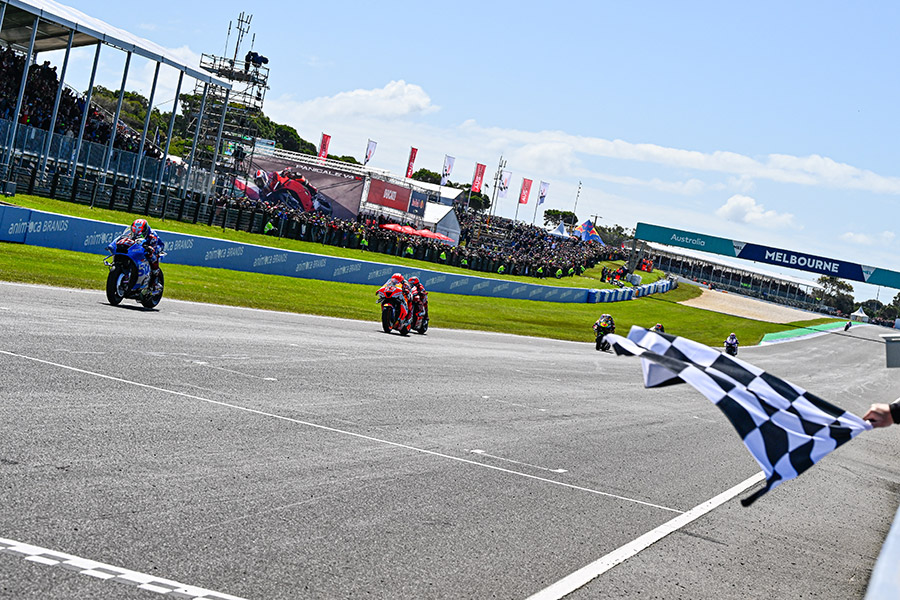 The Animoca Brands Australian Motorcycle Grand Prix made a lot of headlines and a bit of history. The history was the top seven riders finishing, incredibly, within a single second – 0.884, to be exact. It’s also the second closest top ten ever. The headlines? Where do we begin…

It’s Alex Rins (Team Suzuki Ecstar) who took an emotional win, the number 42 fighting at the front throughout and then fending off Marc Marquez (Repsol Honda Team) on the final lap. Marquez, who was forced to settle for second but got back on the box, secured his 100th premier class podium. Francesco Bagnaia (Ducati Lenovo Team), meanwhile, took third, and with it a fair margin of Championship lead as some serious dramas unfolded behind.

The first saw former points leader Fabio Quartararo (Monster Energy Yamaha MotoGP™) run on and face a fight back from outside the top twenty, and his drama wouldn’t end there but the next was for home hero Jack Miller (Ducati Lenovo Team). Alex Marquez (LCR Honda Castrol) overcooked it and made contact with the Australian, sending both down and after both had made stellar starts. With that Miller is out of the Championship hunt, and the title fight got another shake up not long after.

Trying to come back through and at least into the points at the time, Quartararo then suddenly slid out of contention at the Southern Loop, lowsiding off into the gravel in another huge twist. That left an open goal for the contenders still battling it out, with Bagnaia on course to claim the lead… but by how much?

The first leaders were polesitter Jorge Martin (Prima Pramac Racing) and Marquez, before Rins and Bagnaia reeled them in. As the laps ticked down the overtakes kept coming, and the troops were forming for the podium fight: Marco Bezzecchi (Mooney VR46 Racing Team) and teammate Luca Marini were arriving on the scene as Aleix Espargaro (Aprilia Racing) started to fade, watching the chance to capitalise on Quartararo’s error get a little smaller.

The opposite was true of Enea Bastianini (Gresini Racing MotoGP™) as the ‘Beast’ homed in on the fight at the front. As the final showdown started to commence, there were seven riders locked together: Bagnaia, Rins, Marquez, Bezzecchi, Marini, Martin and Bastianini. Who was going to take it?

Bagnaia led them onto the final lap but with ’20 out’ loud and clear on the pit board, the risk vs reward balance was something to consider. But not for Rins and Marquez. Marquez had passed Rins for second at the Southern Loop on the penultimate lap, but the Suzuki rider hit back straight away at Stoner Corner, and that was how they commenced Lap 27 of 27. Rins went a corner earlier this time with a move on Bagnaia for the lead, and Marquez followed to push Pecco down to third. Could the number 93 cook up one final attack?

In the end, Rins was unstoppable. The Suzuki rider kept the door closed to the line as Marquez hung in there looking for a way through, and right behind the focus shifted to Bezzecchi. Would the Italian, Ducati rider and VR46 Academy member launch a late attack on Bagnaia? He wouldn’t. Bagnaia held them off to secure another podium and homed in on Marquez in a big way on the drag to the line, just 0.224 off Rins’ by the flag.

Bezzechi’s fourth place secures him top Independent Team rider in the race and Rookie of the Year for 2022, as he was left to hold off Bastianini and did so – just. The ‘Beast’ was incredibly close by the flag, taking fifth ahead of Marini. Martin took seventh after leading early on from pole, and he creates the stat of the top seven within a second.

Next up came Johann Zarco (Prima Pramac Racing), who had a comeback on his hands after a tough start but made his way through to an impressive eighth. Aleix Espargaro, on a day that could have paid a few more dividends, faded to ninth place, with Brad Binder (Red Bull KTM Factory Racing) rounding out the top ten after earlier having charged as far forward as seventh.

After drama Down Under, it’s just a few days until the paddock heads to Sepang and the Petronas Grand Prix of Malaysia. Bagnaia now leads by a sizeable 14 points ahead of Quartararo, having pulled off that amazing, record-breaking comeback in the standings. Aleix Espargaro is now 27 back and Bastianini is the last contender after Miller’s 0, with the Italian facing a 42-point deficit with two to go.

Alonso Lopez (Beta Tools SpeedUp) played a figurative and literal ace at the Animoca Brands Australian Motorcycle Grand Prix, escaping from the front row to pull out enough gap to serve his Long Lap penalty given in practice and still emerge in the lead – putting the hammer down from there on out to enjoy a track day experience at Phillip Island, winning with over 3.5 seconds in hand. Second went to Pedro Acosta (Red Bull KTM Ajo), another two-time rookie race winner this year, with Jake Dixon (Inde GASGAS Aspar Team) completing the podium after a comeback from P14 on the grid.

The huge headline beyond the podium saw former Championship leader Augusto Fernandez (Red Bull KTM Ajo) crash out from behind teammate Acosta. Ai Ogura (Idemitsu Honda Team Asia) is the therefore the new points leader, although the Japanese rider could only manage 11th and his advantage is therefore only 3.5 points with two races to go. There are also now only those two contenders remaining, as Aron Canet (Flexbox HP 40) is now 50 points back and without a win.

From lights out, Lopez was in charge as he bolted immediately, maintaining the plan to push at the limit from the off. That gave him enough advantage to dive in to take his Long Lap penalty and still emerge in the lead, and then he was gone.

After a crash out of podium contention for Tony Arbolino (Elf Marc VDS Racing Team) and Fermin Aldeguer (Beta Tools SpeedUp) fading back from the podium fight, the battle between Acosta and Fernandez was heating up. The rookie was ahead when his teammate suddenly slid out, losing the front and with it chance to create quite a gap. But rider ok and ultimately only losing four points.

Dixon gained the podium with that, but after having put in quite a comeback to slice through the pack from well outside the top ten. Behind him, Aldeguer held off an impressive charge from Manuel Gonzalez (Yamaha VR46 Master Camp Team), with Jeremy Alcoba (Liqui Moly Intact GP) and Cameron Beaubier (American Racing) for close company. Somkiat Chantra (Idemitsu Honda Team Asia), Canet and Bo Bendsneyder (Pertamina Mandalika SAG Team) completed the top ten ahead of Ogura.

After that drama on race day for Fernandez, Ogura now has chance to take the crown in Malaysia… but it’s only 3.5 points the Japanese rider in hand, and it looks like the battle may well go all the way to the wire.

Izan Guevara (Gaviota GASGAS Aspar Team) attacked and pulled away in style on the last lap of the Animoca Brands Australian Motorcycle Grand Prix, taking another impressive victory and with it, this time, the 2022 Moto3™ World Championship. Deniz Öncü (Red Bull KTM Tech3) got back on the podium in second, ahead of Sergio Garcia (Gaviota GASGAS Aspar Team) as the number 11 ceded the crown but got back on the rostrum.

Garcia took the early lead as polesitter Ayumu Sasaki (Sterilgarda Max Racing Team) lost a couple of positions from pole, but all eyes were on Guevara as the Championship leader had some distance to make up from Row 3. He got that done quickly though, slotting into a top six joined by Garcia, Diogo Moreira (MT Helmets – MSI), Sasaki, Öncü and home hero Joel Kelso (CIP Green Power). Bit by bit two riders on the chase were able to close in, too: John McPhee (Sterilgarda Max Racing Team) and Stefano Nepa (Angeluss MTA Team).

By 10 to go, four remained in the front group as Guevara, Sasaki, Öncü and Garcia pulled away, and there they stayed. On the start of the last lap, it was Öncü ahead over the line, but that didn’t last long as Guevara hit back to take the lead. From there, the number 28 got the hammer down and kept a few precious metres in hand to take what’s fast becoming a signature win, sealing the Championship in the process.

Dennis Foggia (Leopard Racing) headed up the next group after a tougher race for the Italian, who has fallen back to third overall, with Riccardo Rossi (SIC58 Squadra Corse) completing the top ten. Close behind them in the group came David Muñoz (BOE Motorsports), Carlos Tatay (CFMoto Racing PrüstelGP) and front row starter Ivan Ortola (Angeluss MTA Team).