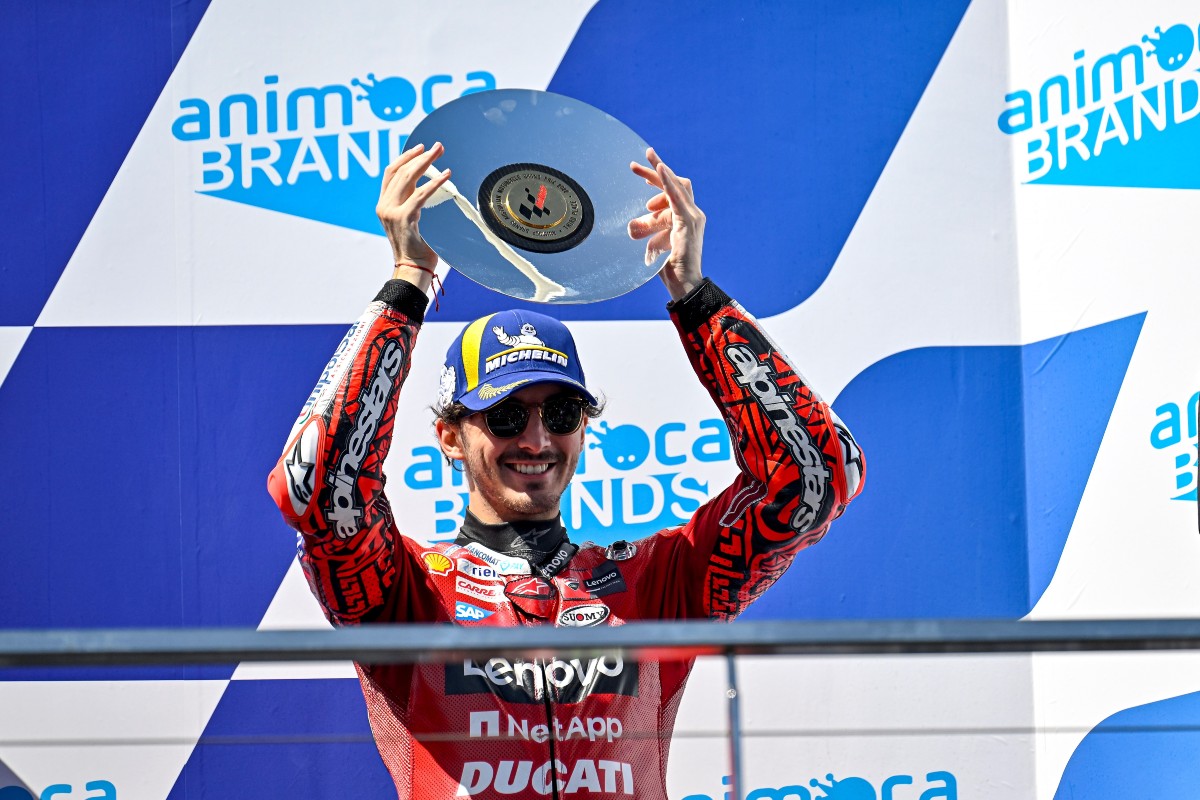 Pecco Bagnaia is the new MotoGP Championship leader. As he closed the Australian GP in third place, held this afternoon at the Phillip Island Grand Prix Circuit, the Ducati Lenovo Team rider succeeded in his comeback, accomplishing a feat never achieved in the top class. Bagnaia was 91 points behind after the German GP at Sachsenring, and now, after eight races, he is the new leader of the Championship with a 14-point lead over Quartararo.

As he was starting from third on the grid, Pecco took the lead of the race on lap 15 and remained there until the last lap, when Marquez and Rins passed him, the latter today’s GP winner. With today’s third place, Bagnaia brings to nine the number of podiums obtained this season. For Jack Miller, however, the home race had an unfortunate ending. Starting from eighth on the grid, the Australian rider had managed to climb back up to the group fighting third, but on lap nine, while sitting in fifth place, Alex Marquez bumped into his bike, and they both crashed. The accident left no physical consequences for Miller, who was forced to retire. Despite that, he remains fifth in the overall standings, 54 points behind his teammate.

Marco Bezzecchi, rider of the VR46 Racing Team, wins the Rookie of the Year title thanks to his fourth-place finish today.

The Ducati Lenovo Team, on the other hand, is one step away from winning the Teams’ World Title in the premier class for the second year in a row; the Italian team is first, with a lead of 84 points over the second, in the teams’ classification when there are two races left to the end of the season.

I am satisfied with the third place today, but the most important thing is that we are finally first in the Championship. I only regret not being able to win because I did my best. In the first laps, I tried to manage the tyre consumption well, but towards the end, I didn’t have the same pace anymore, and I was still struggling with the front. When I saw that Quartararo was OUT, I changed my approach and just tried to have a smart race, avoiding unnecessary risks, to try to take advantage of the situation. The next GP will be in Malaysia, a track where we are usually fast, so there are all the conditions to do well there.

Unfortunately, it was an unfortunate day. I had managed to get back up pretty quickly. We had made some changes to the bike from yesterday, and I felt really comfortable, but at Turn 4, my corner, I got hit by Alex Marquez and crashed. These are things that can happen in the race. Then Alex came to me, explained what had happened to him, and I accepted his apology. I’m just sorry I couldn’t do something more for all my fans who came here to see me today. Still, it was an incredible weekend, and I am so happy to be back in Phillip Island. The positive side is that Bastianini and Aleix Espargaro didn’t score many points today, so we can still aim for third place in the Championship.

With the weekend in Australia over, the Ducati Lenovo Team is about to leave for Malaysia, where the penultimate round of the 2022 season will be held at the Sepang International Circuit in less than seven days, from 21st-23rd October. On that occasion, Pecco Bagnaia will have his first “match point” for the title.