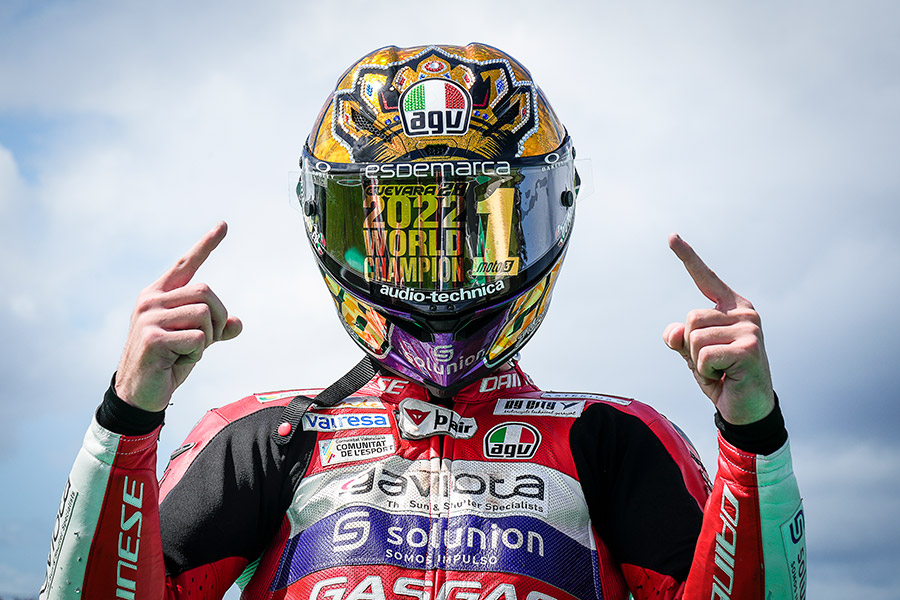 Izan Guevara (Gaviota GASGAS Aspar Team) is the 2022 Moto3™ World Champion! The Majorcan took another stunning victory in the Animoca Brands Australian Motorcycle Grand Prix to wrap up the crown, taking himself more than the requisite 50 points clear with two rounds remaining.

Guevara, born in Majorca in 2004, was already riding motorcycles by the age of three. His first international success came in the European Talent Cup in 2019, as the Spaniard took two top tens in his debut races before winning a stunning six races in a row to take the crown as a rookie. That would be his calling card as an achievement the following season, too.

Guevara raced in the Red Bull MotoGP Rookies Cup in 2020 and moved into what was then the Moto3™ Junior World Championship, now known as JuniorGP™. There, it was a similar story to the ETC the year before: a few solid results prefaced a first win, a second place and then a run of four victories in a row – three of which were taken from P22 on the grid at MotorLand Aragon. In Valencia, Guevara completed the stunning feat of taking the crown as a rookie, defeating Xavier Artigas and Pedro Acosta.

The Majorcan then moved up to the Moto3™ World Championship for 2021 and hit the ground running. The number 28 made an impression immediately, homing in on the podium at Silverstone and Aragon with fourth places. That first rookie win finally came in a chaotic Americas GP, with the GASGAS Aspar rider having shown serious speed all weekend.

2022, therefore, saw Guevara head into the season as a contender from the off. He started the season one place further back than his Grand Prix debut after starting from the back, but was on the podium in Lombok – his first visit to the rostrum that wasn’t a win. By Jerez he was back on the top step with a true stunner of a victory, going round the outside at the final corner. He wasn’t off the podium again before Silverstone, including wins in Catalunya and Germany, and back-to-back glory came again in Aragon and on his first visit to Mobility Resort Motegi.

By Phillip Island, Guevara’s advantage had grown to 49 and the Majorcan had his first match point. He played it in style, escaping in a front group of four and then taking the lead to pull away on the final lap – sealing the crown with his sixth win of the season.

“I’m really happy with my career so far. In 2019 I won the ETC, then Moto3 in JuniorGP with Aspar and I won my first year… then I moved to the Moto3 World Championship with the same team. Last year I was able to have a good season, I took a victory in Austin. A good rookie season. Then this year I pushed in every race to get my goal of being World Champion. And today I achieved it. I’m really happy.
In the start of the race today it was really complicated with the slightly wet conditions, but the track dried quickly and I felt really comfortable. It was possible to push in the lead group with my pace, I’m so happy with this moment, this Championship… I’d like to thank my team, my family for the support, and all my friends.
Today I was really focused on the race, in every overtake I didn’t take any risk and I’m really happy with it, winning the Championship with the victory is an incredible moment and I’ll enjoy it!”

#AustralianGP, world champion
Get All Our Latest News Sent Direct To Your Inbox
Join 30,271 other subscribers.
Follow on Social Media
Get the VROOM Podcast