Lowes returns to the points with gutsy ride to 12th in #AustralianGP, DNF for Arbolino 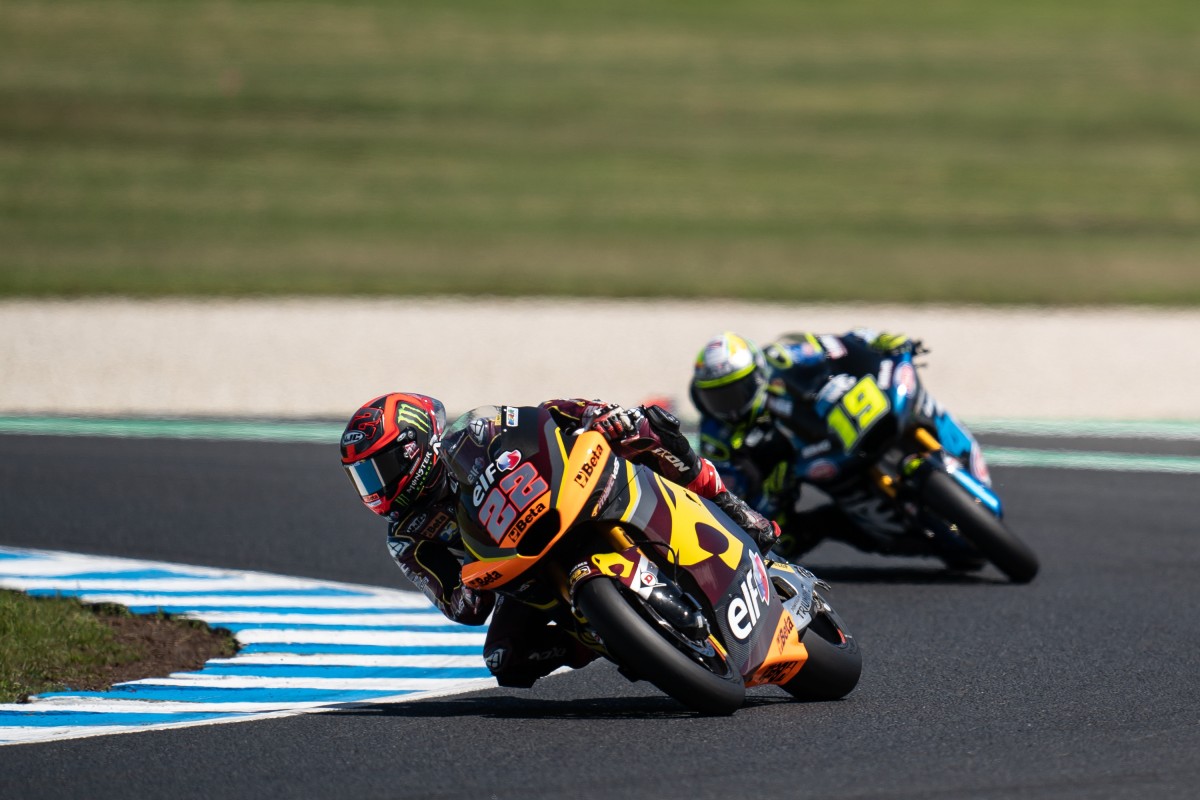 Sam Lowes scored four points for 12th place in the Australian GP despite not feeling physically 100% while Tony Arbolino suffered an unfortunate fall when in second place.

Track conditions were among the best the Moto2 riders experienced all weekend at the picturesque Phillip Island Circuit, with mild wind and ambient temperatures of 16 degrees.

40,197 spectators were in attendance for the 18th round of the season, which was also the first Australian GP since 2019.

Feeling stiff and a little sore after his fast crash on Saturday morning, Sam felt his way into this contest and found himself in 18th after the first lap.

The Briton soon found his rhythm and started gaining places. By lap 16 he was 13th and he went on to finish twelfth to score the first points since his injury return.

Sam now has 55 points in the World Championship with two races remaining.

That was tough! Today I saw that I don’t have enough muscle or power in my shoulder. Yesterday’s crash inflamed it a bit so the last five laps finishing was the priority. The grip wasn’t great at the start I saw a few people crash ahead and then toward the end I had a big gap behind me. I didn’t feel comfortable in the changes of direction. But I’m just happy to finish and get some points. This is the first race distance I’ve done since June. There were a lot of positives to take from this weekend and I was faster in certain points. When I felt fresh, I pushed and wasn’t far off. But I’m really happy to see the chequered flag. That’s what I needed to do. I’m never going to be happy with that result but for where I am in my recovery, it’s not bad. Hopefully I can relax over the next few days and just keep going ahead of Sepang.

Tony Arbolino started brilliantly from fourth on the grid, and overtook three riders in turns one and two to lead early on. After an early fight, Tony settled into his rhythm in second.

Tony’s race came to an unfortunate end when he lost the front through turn eight on the seventh lap when sat in second place.

The result leaves Tony sixth in the World Championship with 150.5 points.

I’m a bit disappointed with the crash. It happened when I was still trying to find my pace and momentum. I was behind some riders but in the cold temperatures it was hard to get my rhythm. I then started feeling OK, so I began pushing. Then I was warming up the tyre behind another rider and when I overtook him there was a lot of wind. I had to manage the situation a bit. My pace was good and today it would have been good enough for the podium. That was our target and we could have reached it. So, we need to stay positive. I feel good with my mind, with myself. After the crash, we’re doing everything possible to win races. I want to thank my crew. Up until Saturday night they were pushing themselves to improve my feeling and today my bike was working better in the race. I really appreciate that.

#AustralianGP
Get All Our Latest News Sent Direct To Your Inbox
Join 30,271 other subscribers.
Follow on Social Media
Get the VROOM Podcast
Download our Vroom.GP App