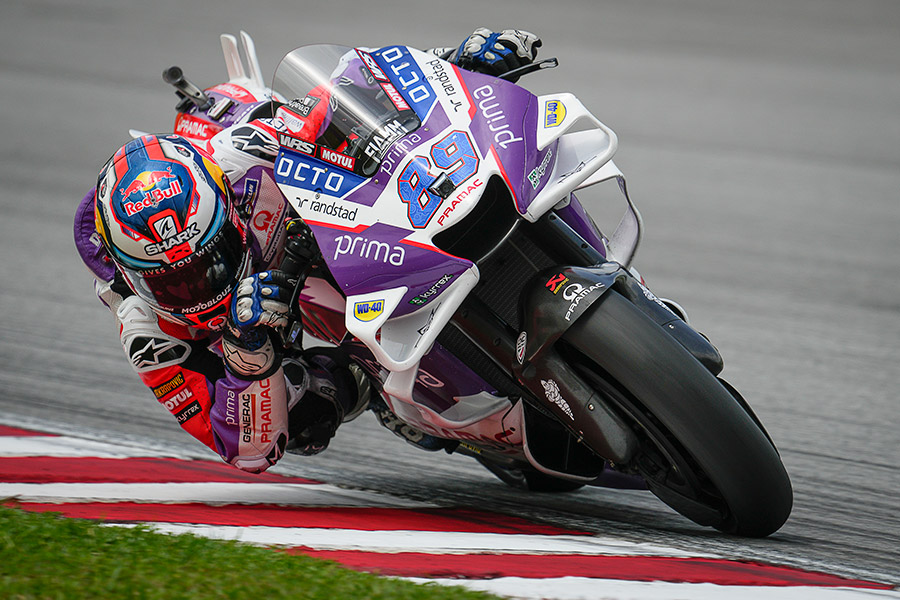 Cometh the hour, cometh the drama! As #MatchPointPecco gets in gear, there was plenty to talk about on Saturday. On pole it’s Jorge Martin (Prima Pramac Racing)as the Spaniard set a new lap record and scorched round Sepang with the first – and only – 1:57 ever. Enea Bastianini (Gresini Racing MotoGP™) is second but a whopping 0.456 back, with Marc Marquez (Repsol Honda Team) completing the front row. So where are the top two title contenders?

The drama began in the morning as Francesco Bagnaia (Ducati Lenovo Team)failed to make it into Q2 and crashed. It continued for the Championship leader as he made it out of Q1 but then crashed again in Q2, rider ok but forced to settle for ninth on the grid. However…

For Fabio Quartararo (Monster Energy Yamaha MotoGP™) it wasn’t an easy Saturday either. He crashed in FP4 and looked to be holding his hand, then heading to the Medical centre for a check up. He has a small fracture to a finger and is fit to continue, but with that added complication. He also suffered a big moment on his final effort in Q2, and the defending Champion will therefore start 12th.

That left Martin’s final stunner as the lap standing at the top as the Spaniard was absolutely unbeatable, nearly a stunning half second clear. Marquez had been following Bagnaia when the number 63 went down but completed his lap to take a front row, possibly in position to make Sunday afternoon’s fight for the crown even more interesting.

Franco Morbidelli (Monster Energy Yamaha MotoGP™) is the top Yamaha in seventh but has a double Long Lap penalty from earlier in the weekend to serve, and Maverick Viñales (Aprilia Racing) is down in eighth but top Aprilia – with teammate and Championship challenger Aleix Espargaro (Aprilia Racing) down in P10. Bagnaia is the rider between the two…

2020 World Champion Joan Mir (Team Suzuki Ecstar) slots in ahead of Quartararo, completing a top 12 that’s absolutely set to stun on Sunday. Jack Miller (Ducati Lenovo Team), meanwhile, crashed in Q1 and lost out to Marquez in moving through, so he’s in P14.

Can Pecco convert Match Point at the first time of asking? Will Quartararo be able to fight back? And if the fight goes down to Valencia… how many contenders will remain?

Ai Ogura (Idemitsu Honda Team Asia) laid down the gauntlet on Saturday at Sepang, taking pole position ahead of his first match point in the fight for the Championship. Title rival Augusto Fernandez (Red Bull KTM Ajo), after topping the timesheets on Friday by eight tenths, could only manage sixth in qualifying and will be looking to move forward ASAP.

Will pole make all the difference for Ogura? He’ll take the title if he wins and Fernandez doesn’t finish better than 13th, with everything on the line on Sunday.

Dennis Foggia (Leopard Racing) put in a last charge for pole at the PETRONAS Grand Prix of Malaysia, setting a new lap record to head the grid for Sunday’s pivotal showdown in the fight to take second overall. He has now-reigning Champion Izan Guevara (Gaviota GASGAS Aspar Team) alongside him, with Sergio Garcia (Gaviota GASGAS Aspar Team), who is currently two points ahead of Foggia, locking out the front row.

After proving incredibly fast on Friday and sitting on provisional pole for much of Q2, Ayumu Sasaki (Sterilgarda Husqvarna Max) was ultimately shuffled down to seventh on the grid, heading the third row.

David Muñoz (BOE Motorsports) heads up the next row and completes the top ten.

Garcia is two points ahead of Foggia heading in, with Sasaki a further 16 behind. All start fairly near the front and all have show some speed in Sepang, so who will strike next?

Get All Our Latest News Sent Direct To Your Inbox
Join 30,292 other subscribers.
Follow on Social Media
Get the VROOM Podcast