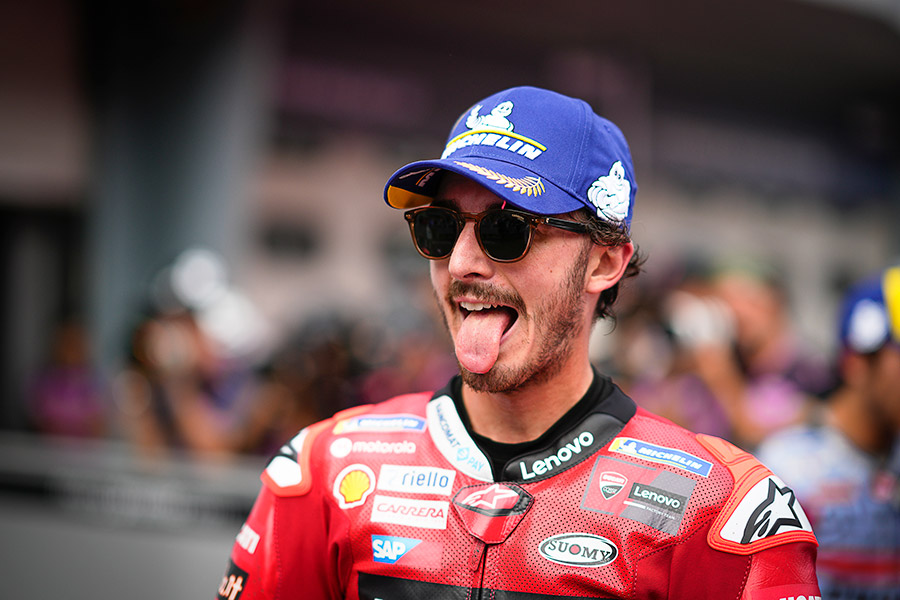 There are few places like Sepang to play a match point. With the humidity hanging heavy in the air and the pressure of potential history just around the corner, lights out for Round 19 added an extra shot of adrenaline. And from there on out, the tension only rose. Two Ducatis, one with the World Championship on the line and another with an entire chess match to decide, escaped into the lead with enough breathing space from the rest to go toe-to-toe. And that they did. The winner, under intense pressure and taking a magnificent seventh victory of the season, was Francesco Bagnaia (Ducati Lenovo Team), with Enea Bastianini (Gresini Racing MotoGP™) just coming up short – after pushing his future teammate to the flag. Again.

Completing the podium and taking the title fight to Valencia was Fabio Quartararo (Monster Energy Yamaha MotoGP™). El Diablo bounced back from a tough Saturday to show exactly why he’s the reigning Champion, riding through the pain barrier to a seriously impressive third place to keep himself in it, 23 points back but setting up a final showdown in Valencia.

Bagnaia got the start of his life and braved it out on the brakes to slot into second from the off, gaining seven places to up just behind polesitter Jorge Martin (Prima Pramac Racing), with Bastianini already harrying the number 63 – and Quartararo looking for a way past Franco Morbidelli (Monster Energy Yamaha MotoGP™) and Marc Marquez (Repsol Honda Team). He found one.

Another big shift then occurred up ahead, with Martin suddenly sliding out the lead – giving that lead to Bagnaia. The title was tantalisingly close for the Italian, and Quartararo may have been third but Marco Bezzecchi (Mooney VR46 Racing Team) was on a charge behind the number 20, with that plus Bastianini – glued to the back of Bagnaia – making anything possible.

At Turn 4 on Lap 11, another thunderbolt hit. Bastainini was late on the brakes, and through on Bagnaia for the lead of the race he went. Could he break away? The two remained glued together, Bagnaia losing no distance to his future teammate, as the sound of cogs whirring started to ramp up even further. Second sure seemed enough, but would it still be enough on Sunday in two weeks’ time?

The laps ticked down and just before six to go, Bagnaia hit back at the final corner to retake the lead – with Quartararo now looking ahead rather than over his shoulder. The Frenchman was catching the lead duo, with Bezzecchi dropping off the back off the Yamaha. With five to go the gap to from Bastianini to Quartararo was 1.6, and next time round Pecco also led by 0.4 as the number 63 stayed serene.

By two to go, the showdown was clear. Quartararo couldn’t gain too much more time but had a secure third in the bag if he kept it on track. And Bastianini had a serious shot at the win, glued back onto the rear wheel of Bagnaia as the final lap began.

Turn 4 came and went – the earlier passing point – and Bagnaia pounded on. The decisive moment then finally came at Turn 9 as Bastianini got a little close for comfort behind the number 63, losing some metres as he gathered it back up. And that was that, Bagnaia had enough to hold it to the line and takes a 23-point lead to the season finale after a magnificent seventh win of the season. Bastianini was just 0.2 away by the flag after making some statements of his own, with Quartararo doing a phenomenal job to end the race on the rostrum to still be in with a chance at keeping his MotoGP™ crown.

Bezzecchi couldn’t quite stay with Quartararo for third but the Rookie of the Year took another impressive finish in P4, carving out some room for himself too. Australian GP winner Alex Rins (Team Suzuki Ecstar) took fifth, with Jack Miller (Ducati Lenovo Team) charging up to sixth by the flag and getting past Marc Marquez late on. Ducati Lenovo Team were also crowned Team World Champions after a tense day at the office!

Brad Binder (Red Bull KTM Factory Racing) did another Sunday classic for a solid eighth, ahead of Johann Zarco (Prima Pramac Racing) and Aleix Espargaro (Aprilia Racing). After a tough weekend it was a tough Sunday for the number 41’s last stand in the title fight on his 300th start, and he was classified tenth after a penalty for an aggressive move on him was handed to Morbidelli. The Italian was forced to settle for P11 after 3 seconds were added to his race time, just ahead ofCal Crutchlow (WithU Yamaha RNF) after another impressive performance from the Brit. Miguel Oliveira (Red Bull KTM Factory Racing), Pol Espargaro (Repsol Honda Team) and Raul Fernandez (Tech3 KTM Factory Racing) were the final point scorers, with Joan Mir (Team Suzuki Ecstar) off to a good start before a technical problem forced him into pitlane.

What’s 23 points between two of the best riders of their generation? One spectacular final weekend of the season, that’s for sure. Don’t miss #TheDecider as the Circuit Ricardo Tormo hosts in two weeks – with everything on the line and a Champion certain to be crowned.

In an incredibly nervy showdown at Sepang, it was Tony Arbolino (Elf Marc VDS Racing Team) leaving with a third intermediate class win in some style – and Augusto Fernandez (Red Bull KTM Ajo) leaves with the Championship lead once again. After Arbolino and Ai Ogura (Idemitsu Honda Team Asia) had escaped at the front, the Japanese rider and then-points leader decided to make an attack – and slid out on the last lap.

Arbolino was left with a sizeable lead ahead of another impressive podium for Alonso Lopez (Beta Tools SpeedUp), who now leads the fight for Rookie of the Year despite only joining the grid full time at Le Mans. Jake Dixon (Inde GASGAS Aspar Team) was a protagonist as he went elbow to elbow with Fernandez, the Brit eventually able to escape for another impressive podium.

After Arbolino and Ogura escaped, it was initially Manuel Gonzalez (Yamaha VR46 Master Camp) holding third but in the latter stages, Lopez was able to pounce. He was followed by Dixon not long after, leaving Fernandez to take on the nervy task of trying to pass the rookie on the final lap – without knowing Ogura was about to crash out.

That was the drama as the Japanese rider went for a move at Turn 9, and suddenly the number 79 was on the floor. That left Arbolino with time to wave to the crowd on the way to the final corner, then crossing the line over 10 seconds clear for an impressive third Moto2™ win.

Lopez was able to keep a fairly secure second after that, with Dixon dispatching Fernandez, then Gonzalez and taking another podium. Fernandez did make his last lap move on the rookie ahead, and takes a valuable fourth to give him a 9.5 point lead heading into Valencia.

There was drama on Lap 1 for Pedro Acosta (Red Bull KTM Ajo) as he collided with Somkiat Chantra (Idemitsu Honda Team Asia) and they were out early on, both riders ok.

The title fight rolls on and Fernandez is back on top. It’s 9.5 points ahead of the final showdown in Valencia, and on the Red Bull KTM Ajo rider’s home turf.

John McPhee (Sterilgarda Husqvarna Max) took an unbelievable win at the PETRONAS Grand Prix of Malaysia, making the perfect attack at the final corner to come out on top for the first time since San Marino 2020 – and from P22 on the grid. The Scotsman just pipped teammate Ayumu Sasaki to the line by 0.048, with Sergio Garcia (Gaviota GASGAS Aspar Team) completing the podium after losing out late on.

Izan Guevara (Gaviota GASGAS Aspar Team) suffered some late drama, having to avoid Sasaki after the Japanese rider suffered a moment, leaving the reigning Champion down in P12.

After a freight train start, bit by bit a top six of Guevara, Sasaki, Jaume Masia (Red Bull TKM Ajo), Dennis Foggia (Leopard Racing), Garcia and Diogo Moreira (MT Helmets – MSI) broke away at the front, but there was some decisive drama with four to go. Sasaki had a bobble on the main straight after overtaking Guevara, and the number 28 had to bail out and take some avoiding action, heading off onto the grass and dropping back. Meanwhile, McPhee had bridged the gap and was more than in the fight for victory.

That left Garcia leading Sasaki, Masia, Foggia, Moreira and McPhee, and starting the last lap the number 11 was holding firm ahead of Foggia. And then everyone overtook everyone all at once, or so it seemed, with the Leopard going for a move on the Aspar and then the rest of the lap largely two or three abreast. As the gaggle headed into the final corner, it was McPhee who pitched it to perfection, hugging the inside line and then tucking in for the final drag to the flag. Teammate Sasaki went toe-to-toe with the Scotsman but couldn’t quite make it stick, with McPhee taking an emotional first win since 2020 by just 0.048. Garcia takes third and another valuable podium, gaining points on Foggia too, as did Sasaki.

Foggia finished sixth in the shuffle, with Masia taking fourth and Moreira fifth. That concluded the front group after Guevara was forced to drop out of it earlier, and the second group was fronted by Daniel Holgado (Red Bull KTM Ajo) in seventh, just ahead of Ryusei Yamanaka (MT Helmets – MSI), Ivan Ortola (Angeluss MTA Team), Deniz Öncü (Red Bull KTM Tech3) and Xavier Artigas (CFMoto Racing PrüstelGP) – with Guevara next up in P12 a small gap back.

Heading into Valencia it’s Garcia keeping the advantage in the fight for silver – and the Circuit Ricardo Tormo is his playground.