Quartararo speeds to 3rd place in #MalaysianGP, 11th for Morbidelli 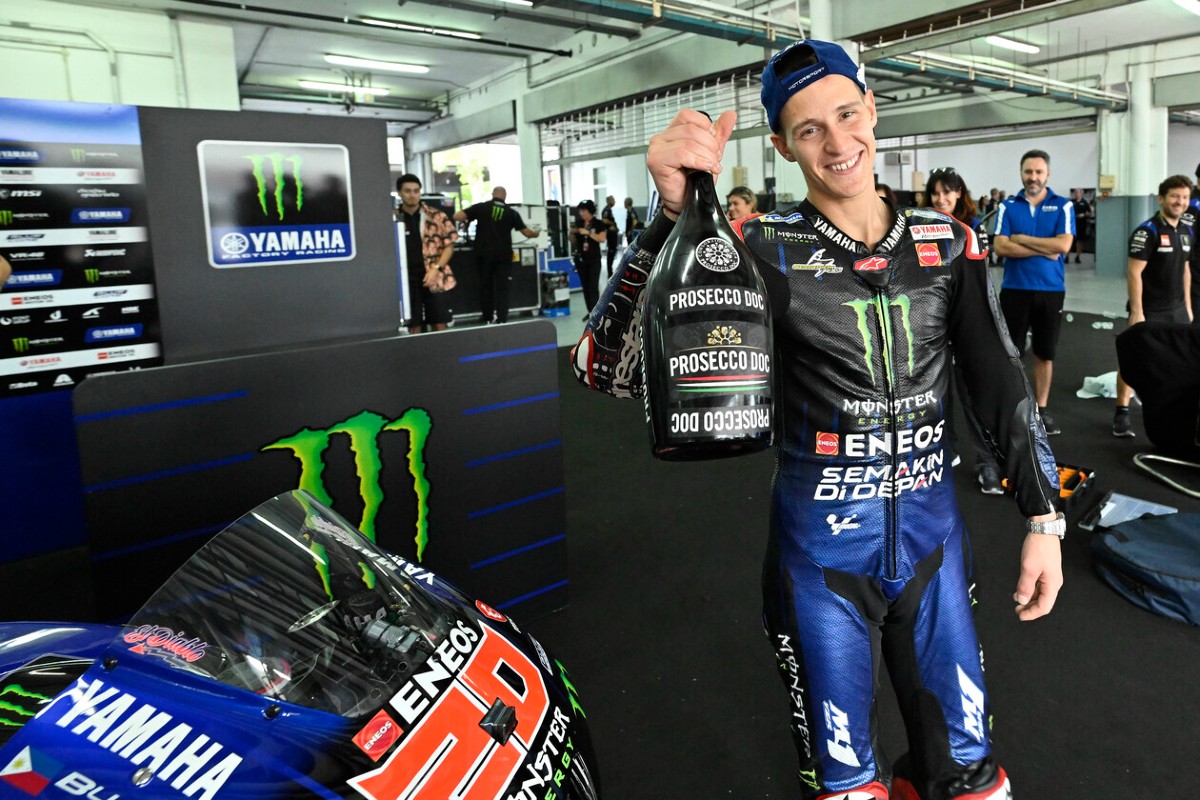 Monster Energy Yamaha MotoGP‘s Fabio Quartararo secured a strong third place podium at a crucial moment in the MotoGP World Championship. This result at the Grand Prix of Malaysia moves the championship title fight to the final round of the season. Franco Morbidelli helped his teammate in the early stages of the race and showed incredible pace after his double long-lap penalty. He took the chequered flag in 10th but was handed a 3-second sanction that saw him end up in 11th.

Quartararo didn‘t have a perfect start from P12 but was a demon on the brakes and made up six positions before the first corner. He soon overtook teammate Morbidelli to complete the first lap in fifth position. He then proceeded to hunt down the three riders fighting for second place. With Morbidelli keeping approaching rivals at bay for the first four laps, the Frenchman had a bit of breathing space. With 16 laps remaining, he overtook Marc Marquez, right in time, as the pursuers were approaching.

On lap 7, Jorge Martin crashed out. It meant that the Yamaha man was provisionally on the podium in third place. However, his gap to the now leading duo ahead of him was not decreasing. Instead, Marco Bezzecchi looked to be nearing. But the number-20 rider had the edge at the end of the race. He kept a hot pace going and rode to a stellar third place, 2.773s from first.

Morbidelli held on to his fifth starting position through the tight first corner. He let Quartararo pass and at the same time lost a place to Joan Mir, but not for long. The Italian was the perfect wingman for El Diablo, keeping Mir and Alex Rins behind him as long as possible, before he had to complete the first part of his double long-lap penalty.

The number-21 rider fell back to 10th after the first long lap, to 14th after the second, and rejoined battling with Johan Zarco. He lost a position but gained it back when Martin crashed out. Morbido enjoyed the battle in the mid-pack, making good use of his nimble YZR-M1, and managed to gradually work himself up the rankings. He crossed the finish line in tenth, 20.235s from first. However, he was given a 3s penalty for his overtaking move on Aleix Espargaró, putting him in 11th in the race timesheets.

After today‘s race, Quartararo is still second in the overall standings with a 23-point deficit and a 235 points total, while Morbidelli remains in 19th but now with 36 points. After Round 19, Yamaha are third with 243 points in the Constructor championship, and Monster Energy Yamaha MotoGP place fifth in the Team championship with 271 points.

The team will travel back to Europe and enjoy one week off before the final round of the 2022 season, held at the Circuit Ricardo Tormo in Valencia, Spain from 4-6 November.

I feel so good. It was a long time that I didn‘t get on the podium. I gave my maximum today. I couldn‘t have done better than this. I‘m proud of myself because our main rival had a good day, but we also had a good day in the end. I know exactly where I was losing time today. As for my riding, this was one of my best rides of the season, especially the first laps. I‘m feeling super happy. At least we bring the title fight to Valencia. Even if our chances are super slim, we did everything we could to end the championship fight in Valencia.

I have to be happy about this weekend. I was fast throughout all the practice sessions. I had a really good pace. I was also able to be quick in qualifying, which was the most important thing. I started the race and I needed to do these two long laps. After I cleared out the two penalties, I got back in – I don’t know if my tyres got dirty or something – but I lost some speed and some grip right away. It was difficult to get back up to the speed that I think I possibly could have achieved otherwise. But anyway, I was able to catch up, catch up, and catch up. Then, on the final lap, I got another penalty for normal last-lap overtaking. I’m sorry about that, but in my opinion there was enough space to go into that corner. We can discuss all day long if it was me going towards Aleix, or him towards me. So, finally, I got the penalty. But this doesn’t take away from my good race and good weekend.