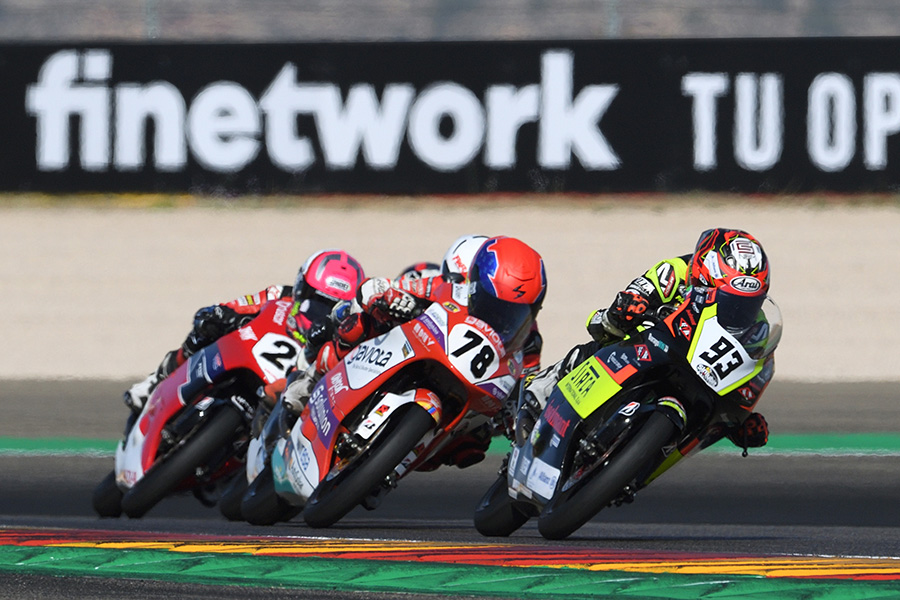 The Ricardo Tormo Circuit has been historic in hosting title deciders in motorcycle racing and 2022 is no different: with JuniorGP™ and Moto2™ ECh settled, Hawkers ETC is in the spotlight…

The final round of the 2022 Finetwork FIM JuniorGP™ World Championship is coming into view as the Ricardo Tormo Circuit in Cheste, Valencia welcomes the final chapter in what has been yet another record-breaking season. With the JuniorGP™ class all wrapped and the Moto2™ European Championship also decided, all eyes will be on the Hawkers European Talent Cup with the battle still raging on.

Looking at the JuniorGP™ class, Jose Antonio Rueda (Team Estrella Galicia 0,0) has already got the title bagged, so goes into the round looking to add to his win tally of five for 2022. A first win of the season and thus his career came in Valencia earlier in the year and he’ll be aiming for a repeat this weekend too. Therefore, attention turns to the battle for second, currently occupied by David Salvador (Laglisse Academy) who has five podiums this year, including two in Valencia. He’s yet to win a race in his career and with a move up to Moto3™ World Championship action in 2023 confirmed, he’ll hope to end this year on a high. He has a 15-point advantage over Filippo Farioli (Aspar Junior Team) who sits third, likewise with five podiums but also with a win. A crash from victory contention in Valencia Race 1 earlier in the year preceded a first career podium in Race 2; will he overcome Salvador in the last round of the year with two races to go?

Just three points behind Farioli is Syarifuddin Azman (SIC Racing), who with three podiums in 2022, is still mathematically in contention for second, 18 behind Salvador. Azman only took three points last time out and relinquished third overall, something he’ll be keen to grab back. He was fourth in Valencia earlier in the year in Race 2. 13 points behind him is top rookie Angel Piqueras (Team Estrella Galicia 0,0) who has three podiums to his name this year. A first podium at Valencia earlier in the season, Piqueras is ready to put in a final charge to get on terms for third overall. Valencia race winner from earlier in the season, David Alonso (Aspar Junior Team), is eleven points behind Piqueras and will hope to snatch a top five in the overall Championship standings.

The title is all done and dusted in the Moto2™ ECh too, with Lukas Tulovic (Liqui Moly Intact Junior Team) crowned in Race 1 at MotorLand Aragon last time out. With a move confirmed to the Moto2™ World Championship for next year, can Tulovic bow out in style? Senna Agius (Promoracing) sits second and will finish there regardless of his position this weekend, with just one race to go. Agius didn’t score in Valencia earlier in the year and will be keen to cap off 2022 in style, whilst it’s Alex Escrig (Yamaha Philippines Stylobike Racing Team) in third. A win for Alex Toledo (Pertamina Mandalika SAG Racing Team) with Escrig finishing 15th would see Toledo overcome the deficit and snatch third, but he’s in a bigger battle with Xavier Cardelus (Promoracing), with the Andorran being in fine form of late with three podiums in four races, whilst Toledo is without a rostrum since Barcelona. 16 points separate Toledo ahead of Cardelus. Marco Tapia (Easyrace Team) could be Stock Champion too; he’s 11 points clear of Alex Ruiz (FAU55 Tey Racing).

The last race of the 2022 Hawkers ETC season will be a title-decider and is set to titanic; Guido Pini (AC Racing Team) vs Joel Esteban (Aspar Junior Team) will be the battle to watch. Pini leads after taking a career-first win at Aragon in Race 1 last time out, before a second in Race 2. Esteban managed fifth in third respectively, but the pendulum swung in Pini’s favour. However, Esteban won in Valencia back in Race 1 earlier this year. Between them, whoever wins the race, takes the title. Esteban has to outscore Pini by three points to take the title (if it just three, he will take it by virtue of countback). That means if he finishes on the rostrum and Pini is directly behind him, it’s good enough to retake the title lead and the ultimate prize. For Pini, it’s easier: beat Esteban on the podium, or finish directly behind him if he’s fourth, or up to two places behind him if he’s fifth, all the way back to 13th. Third is outgoing title-holder Max Martinez (Team Honda Laglisse), 11 points clear of Casey O’Gorman, (VisionTrack Racing Team) who took a first win last time out at Aragon.

The Sunday race schedule for the final round of the FIM Finetwork JuniorGP™ World Championship is as follows (local time):

valencia
Get All Our Latest News Sent Direct To Your Inbox
Join 30,292 other subscribers.
Follow on Social Media
Get the VROOM Podcast