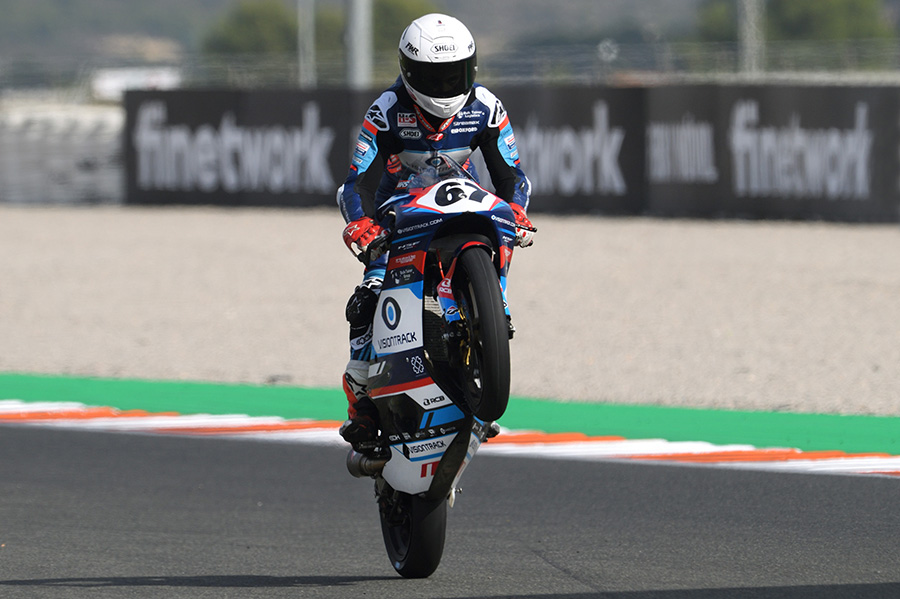 The 2022 Finetwork FIM JuniorGP™ World Championship gave two new polesitters on Saturday at the Ricardo Tormo Circuit in Valencia, whilst title rivals are set to battle it out for the ultimate prize on Sunday. In the JuniorGP™, it was a third pole position of 2022 for Collin Veijer (AGR Team), whilst it was a first for Senna Agius (Promoracing) in the Moto2™ European Championship and Casey O’Gorman (VisionTrack Racing Team) in the Hawkers European Talent Cup.

In JuniorGP™, it was a dazzling display from Dutchman Collin Veijer (AGR Team), as he continued his form forwards to the season-closing event. Taking a third pole of his 2022 campaign, the 17-year-old KTM rider aims to convert it once again, with the two wins of his 2022 season coming from pole. It wasn’t entirely incident-free, as he suffered a crash after going top, although he was unscathed. Leaving it until the afternoon to set his fastest lap time David Almansa (Finetwork Mir Racing Team), qualified second but due to slow riding in sectors, was served a back of the grid start for Race 1. He was ahead of 2022 JuniorGP™ Champion Jose Antonio Rueda (Team Estrella Galicia 0,0), who aims for a sixth win of the year.

It was a very impressive showing from Italian Luca Lunetta (AC Racing Team), who took a well-earnt fourth place, having been on the front row at the Ricardo Tormo Circuit earlier in the year. With strong top seven showings in the last four races and a best of fifth, the Husqvarna rider goes for a first podium of 2022. Fifth went to Colombian star David Alonso (Aspar Junior Team), with the GASGAS rider aiming to repeat his Valencia win from earlier in 2022 on Sunday. Rounding out the second row is David Salvador (Laglisse Academy) in sixth, who hopes to end 2022 with a first JuniorGP™ win before moving onto Moto3™ World Championship action in 2023. Starting sixth in Race 1 due to penalties ahead of him will be Alberto Ferrandez (Finetwork Mir Racing Team).

With the top two in the Moto2™ ECh standings already locked in, it’s all about pride and glory. Having had pole at every round in 2022, Lukas Tulovic (Liqui Moly Intact Junior Team) was denied a clean sweep as Senna Agius took his first ever pole, the first for Australia in the class. Second place went to Alex Escrig (Yamaha Philippines Stylobike Racing Team), who hopes to wrap up third overall, whilst 2022 Champion Lukas Tulovic goes from third place. He’ll also hope to end 2022 on a high before moving on up to the Moto2™ World Championship.

Ahead of the title-deciding race for Hawkers ETC, the title contenders are spread out across the front two rows of the grid; pole position, for the first time in the class, went to Irishman Casey O’Gorman (VisionTrack Racing Team). The 15-year-old put in a perfect lap to shatter the lap record for the class in the first qualifying session, as he aims for back-to-back wins and a fourth podium in five races. Qualifying second was outgoing Champion Maximo Martinez (Team Honda Laglisse), but he received a penalty for slow riding, meaning he’ll go from the back of the grid. That promotes Championship leader Guido Pini (AC Racing Team) into second place for a second front row of 2022, whilst Dodo Boggio (Aspar Junior Team) takes third. Three points behind Pini in the title race, Joel Esteban (Aspar Junior Team) goes from fifth on the grid at a circuit he won at earlier in the year.

JuniorGP, valencia
Get All Our Latest News Sent Direct To Your Inbox
Join 30,292 other subscribers.
Follow on Social Media
Get the VROOM Podcast