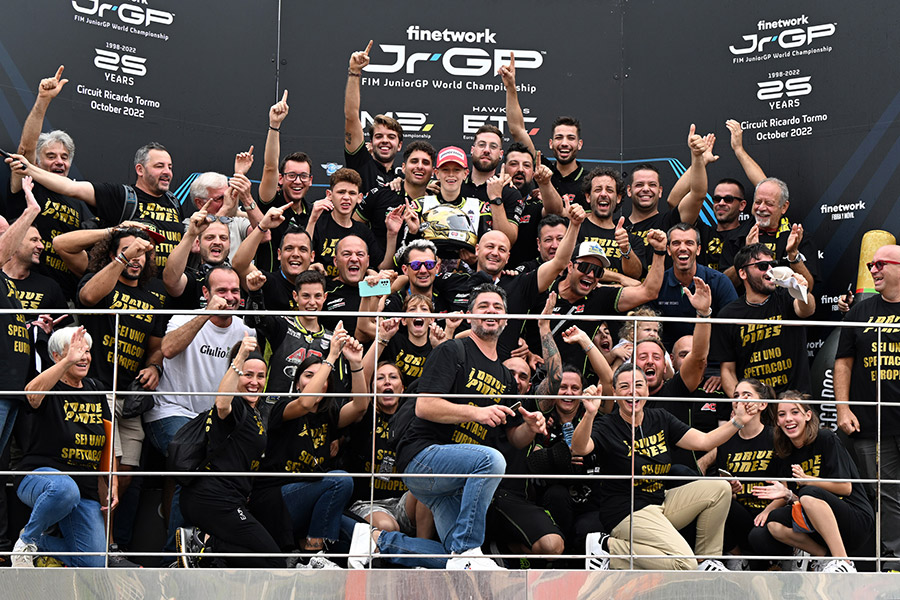 The 25th season of creating Champions has come to an end with new names making history at the Ricardo Tormo Circuit.

In what was a day full of records, the 2022 Finetwork FIM JuniorGP™ World Championship came to a dramatic close at the Ricardo Tormo Circuit in Valencia, Spain. Whilst two titles were decided in previous rounds for the JuniorGP™ and the Moto2™ European Championship, the Hawkers European Talent Cup and Stock Moto2™ European Championship both had final round showdowns. Two new race winners took the honours in JuniorGP™ with David Salvador (Laglisse Academy) and David Almansa (Finetwork Mir Racing Team), whilst it was Lukas Tulovic (Liqui Moly Intact GP Junior Team) and Casey O’Gorman (VisionTrack Academy Racing) on top in Moto2™ ECh and Hawkers ETC.

The final round of the JuniorGP™ season welcomed two races, and Race 1 was superb. Polesitter Collin Veijer (AGR Team) hoped to convert his third pole of 2022, but he had plenty of company from the start. Jose Antonio Rueda (Team Estrella Galicia 0,0), David Alonso (Aspar Junior Team), Facundo Llambias (Team Estrella Galicia 0,0), David Salvador, and Harrison Voight (SIC 58) all chased the Dutchman in the early stages, whilst from the seventh row due to penalties, Filippo Farioli (Aspar Junior Team) and David Almansa came through the order into the lead group. However, in the closing stages, Llambias crashed out at Turn 2, only for Almansa to follow suit at the same corner a few laps later – Almansa highsiding but walking away. On the last lap, a four-way fight saw Salvador move from third to first with a bold move at the last corner. Alonso attempted the same but got it wrong, tagging Salvador before crashing out, costing Rueda crucial time. In a run to the line, Salvador held on for one of the closest finishes of all-time, pipping Veijer by 0.002s, with Farioli third.

Race 2 was also dramatic from the start with a battle between Veijer and Rueda, including an early-race collision at Turn 3, although both stayed upright. In the mix from the start was Luca Lunetta (AC Racing Team), as well as familiar faces Farioli, Almansa, Voight and Alberto Ferrandez (Finetwork Mir Racing Team) in a seven-rider scrap at the front. There was big drama in the final third of the race as Lunetta and Veijer collided on the exit of Turn 1 in a convergence of lines, leaving Veijer on the floor. However, two laps later, an oil spillage from a rider downfield meant Turn 2 was slippy, catching out a number of riders, including race leader Almansa. However, a red flag was shown and due to Almansa completing the previous lap, he was given victory ahead of Farioli and teammate Ferrandez. Rueda already had the title, but Salvador held onto second ahead of Farioli.

In the Moto2™ ECh category, it was a fine display by Lukas Tulovic; the German rider, already crowned Champion and with a move to Moto2™ World Championship action in 2023, had to come from third on the grid but off the start, dropped to fifth place. He soon picked off Yeraz Ruiz (FAU55 TEY Racing) and Roberto Garcia (Cardoso Racing) to go third, before sitting behind Senna Agius (Promoracing) and Alex Escrig (Yamaha Philippines Stylobike Racing Team). Tulovic got ahead of them both in the final six laps, with Escrig chasing Tulovic once he cleared Agius but to no avail, as the German taking a seventh win of 2022, finishing inside the top two in every race throughout a memorable Championship campaign. Behind him in the standings, Agius was a proud second for Australia whilst Spanish rider Escrig took third. Consistency was key in the Stock class, as Daniel Muñoz (SP57 Racing Team) won again, but Marco Tapia (Easyrace Team) took the title.

It was a monumental day in the Hawkers ETC as history was made once more. With just three points between them, Guido Pini (AC Racing Team) started second whilst three points behind in the title race, Joel Esteban (Aspar Junior Team) went from fifth. In a race-long battle of swapping positions and trading paint, the two were doing battle in the lead group, which saw Casey O’Gorman (VisionTrack Racing Team), outgoing Champion Maximo Martinez (Team Honda Laglisse), Jesus Rios (MRE Talent), Brian Uriarte (Team Estrella Galicia 0,0) and teammate Rico Salmela fight it out. However, with a vital move towards the end, Pini placed himself in a perfect position and clinched the crown with P2, as O’Gorman won, whilst a dejected Esteban was third, missing out on the title by seven points. Irishman O’Gorman took third overall in the title behind Esteban and Champion Pini, the first Italian Champion in the class.

JuniorGP, valencia
Get All Our Latest News Sent Direct To Your Inbox
Join 30,292 other subscribers.
Follow on Social Media
Get the VROOM Podcast