#ValenciaGP, the final round and #TheDecider – preview: MotoGP, Moto2, Moto3 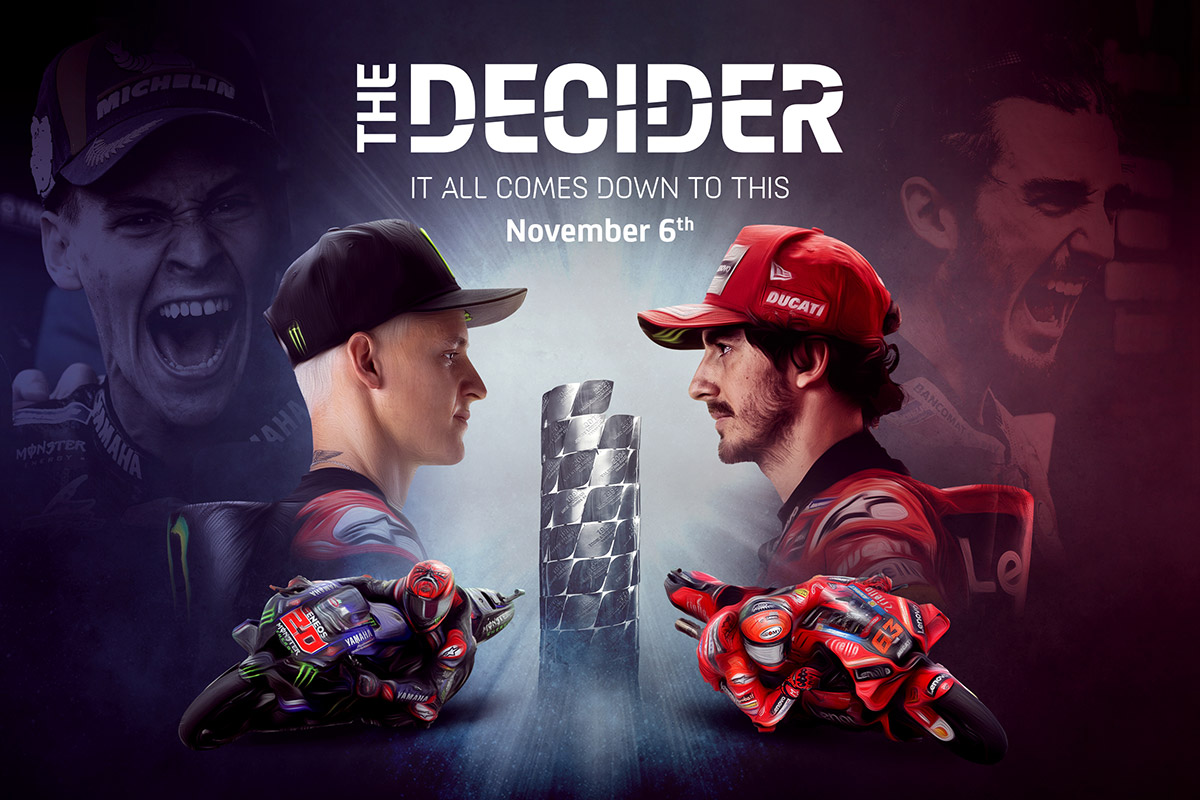 And so it begins. The final weekend of the season. The decider: two riders, one crown, and an incredible year of ups, downs, thrills, spills, wins and defeats. 23 points split challenger Francesco Bagnaia (Ducati Lenovo Team) from incumbent Fabio Quartararo (Monster Energy Yamaha MotoGP™), and for the crowd watching on that makes it an easy enough equation: the only thing Quartararo can do is win. If he doesn’t, Bagnaia need not even finish, such is his advantage, but this is motorcycle racing. It ain’t over till the chequered flag waves (ask 2006.)

In the red corner, Bagnaia has a stunning seven wins and has overcome a deficit of 91 points to sit 23 clear. He’s broken more than a few records and stands to become the first Ducati rider to take the crown in 15 years – something that would also see the Bologna factory complete the Triple Crown of Constructors’, Teams’ and Riders’ titles. He won at Valencia last year on a historic day for Ducati too as they locked out the podium, so the track will not be an unwelcome venue for the decider. But that was then, and this is now – with history beckoning with open arms. No longer the chaser, Bagnaia is now the rider in the hot seat.

In the blue corner, Quartararo’s year has largely been a study in consistency. Few mistakes, some impressive victories and, until late on, the sole Yamaha scoring constructor points every weekend speak to an incredible achievement of a season. A tough Thai GP and then another nil points in Australia seemed to see the tide turn, but El Diablo wasn’t done. As Sepang staged the first match point for his opponent, Quartararo pulled out a much-needed podium for his final stand, and stand he did as the fight rolls on. Valencia would likely not be his venue of choice, but for Yamaha it’s been a solid one… so with zero pressure now the weight of expectation has shifted to Bagnaia, can Quartararo come out swinging?

The decider, however, does not exist in a vacuum. It exists on a grid of the fastest riders and machinery in the world, all of whom have their own targets to hit and glory to chase. Some of whom also have loyalties. With history on the line for Ducati, the message is, as a bare minimum: do not get anywhere close to being the reason for a last-minute heartbreak. And that message goes out to a third of the grid: Jack Miller (Ducati Lenovo Team), Enea Bastianini (Gresini Racing MotoGP™), Johann Zarco (Prima Pramac Racing), Jorge Martin (Prima Pramac Racing), Marco Bezzecchi (Mooney VR46 Racing Team), Luca Marini (Mooney VR46 Racing Team) and Fabio Di Giannantonio (Gresini Racing MotoGP™).

Some, like Zarco, have already said they’ve made sure to keep risk under control. Some, like Martin, have said it’s not much to do with him, for which read, most probably, “I’ll make up my own mind”. Miller has already been a team and constructor hero, as well as a teammate pep talker to get Bagnaia feeling confident in the wet. Bastianini, meanwhile, remains staring at the camera with the hint of a smile and an eyebrow raised, leaving many wondering how the Italian will take on the decider.

Ducati, for their part, have been vocal about having sent out no team or constructor orders before this point in the battle. Bagnaia has also stated he wants to win on track, not by order from above. And amid all the talk willfully eager to create months of Borgo Panigale factory puppeteering, the results actually do speak to the riders being able to #GoFree: Miller’s wins and podiums ahead of Pecco, Bastianini’s challengers for his compatriot. The order to not jeopardise history in the making may simply prove another way of saying: “Don’t do anything silly”, and that’s just common sense. We’ll find out on Sunday…

For Quartararo, meanwhile, the allies have been a little further back this season. Teammate Franco Morbidelli (Monster Energy Yamaha MotoGP™) showed a step forward at Sepang in terms of pace though, and he has known glory at the track before. But what about the rest of the field? Aleix Espargaro (Aprilia Racing) is now out the fight and looking for much more as the paddock returns to Europe, as is teammate Maverick Viñales, and Brad Binder (Red Bull KTM Factory Racing)isn’t even mathematically out the fight for a place in the top five overall this season, such is the South African’s record of Sunday heroics and consistency.

There are plenty more names with little to lose in engaging full attack mode, too – as well as those facing their own last tangos in 2022. Alex Rins (Team Suzuki Ecstar)and teammate Joan Mir, the latter a winner at Valencia, will want to leave the Hamamatsu factory on a high. Cal Crutchlow (WithU Yamaha RNF MotoGP™) will be stepping down from competition once again, as rookie teammate Darryn Binderalso prepares for a last dance on the way to Moto2™. Alex Marquez (LCR Honda Castrol) heads from Honda to try a Ducati, and Pol Espargaro (Repsol Honda Team) switches back to Austrian machinery. Remy Gardner (Tech3 KTM Factory Racing) sets sail for WorldSBK as teammate Raul Fernandez switches factory, and Miguel Oliveira (Red Bull KTM Factory Racing) kisses goodbye to KTM. Miller does the same to Ducati, too, and it speaks well of the Australian that that’s not become a headline ahead of such a pivotal weekend for Borgo Panigale.

Last but not least, we didn’t forget him. And the rest of the grid, the protagonists of #TheDecider and the fans in the stands shouldn’t, either. Ahead of every anti-clockwise track, the Marc Marquez (Repsol Honda Team) klaxon must be sounded. It’s a requirement given the number 93’s incredible record. And it may have been a long, tough time of late to get that glory back, but Marquez already has a pole and a podium since his return – a return where time is on his side as every new race and week adds a little more strength to his recovery. Can the eight-time World Champion steal the headlines this weekend? It would be quite a gauntlet to throw down ahead of 2023, where Marquez has his eyes set on more than just the occasional prize.

At the time, the crash in Australia for Augusto Fernandez (Red Bull KTM Ajo) felt pivotal. But fast forward to the final lap at Sepang and Ai Ogura (Idemitsu Honda Team Asia) definitely upstaged the Spaniard in ways he will likely still be ruing. And so we arrive into the final round with Fernandez’ name pencilled on the trophy instead, with the number 37 9.5 points clear with 25 still up for grabs.

Both have had incredible seasons and would be deserving of the crown, but that’s not how it will work once the lights go out. There can only be one, and here’s how each can get it done:

Add in the likes of Alonso Lopez (Beta Tools Speed Up), on the hunt to keep his lead in the Rookie of the Year standings, wrap up that title and win another race, vs Pedro Acosta (Red Bull KTM Ajo) looking to fight back, Aron Canet (Flexbox HP 40) searching for that maiden intermediate class win, Jake Dixon (Inde GASGAS Aspar Team) the same and Tony Arbolino (Elf Marc VDS Racing Team) on a roll…

Izan Guevara (Valresa GASGAS Aspar Team) has one last chance to sign of 2022 with a win ahead of new adventures next season, but the fight for second is primed to try and get in his way. Sergio Garcia (Valresa GASGAS Aspar Team) leads it as it stands, and wouldn’t you know it, the Circuit Ricardo Tormo is something of a special track for the number 11. From junior categories to the World Championship, it’s a place he’s created some serious glory.

Still, Dennis Foggia (Leopard Racing) is in touching distance to try and make a final stand, whereas Ayumu Sasaki (Sterilgarda Husqvarna Max) more depends on what happens around him to see where his final position is for the year. The Japanese rider has been the most consistent, alongside Guevara, for some time, however – and anything can happen in Moto3™.

#TheDecider, #ValenciaGP
Get All Our Latest News Sent Direct To Your Inbox
Join 30,271 other subscribers.
Follow on Social Media
Get the VROOM Podcast