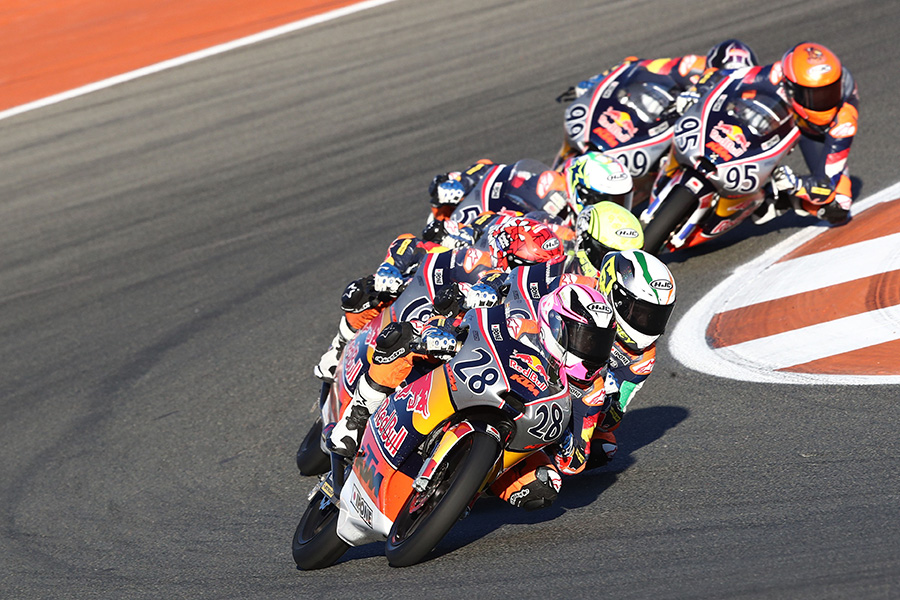 It was an 8 man KTM RC 250 R battle for the win all the way to the line but for José Rueda 7th was plenty to secure the Cup. His only challenger, Dutch 17-year-old Collin Veijer, finished just ahead and left the 17-year-old Spaniard with a 14 point advantage after the pair had struggled over the title throughout the 14 race season.

Quilles thrilled with his 3rd win

“I think it is one of the best races of my career. I think I made a very intelligent race. I studied and thought a lot about it and I had a lot of confidence going into the last corner,” explained the 14-year-old.

“I was a bit better than them there so in the last lap I told myself what I had to do to get ahead of the others and I braked later and harder than them.”

I had a good line going in, good on the brakes and also a good drive so it worked out, it was a good strategy and I had tried to do that yesterday but then Casey (O’Gorman) was just fighting to hard and I couldn’t get in the right place on the last lap.”

This time O’Gorman, the 15-year-old Irishman, had slid off battling for the lead with 7 laps to go.

Piqueras not thrilled with his 3rd 2nd place

“I’m not so happy with that, I think I worked very well but today the race was faster and it was tougher. 2nd is OK but I wanted more, I really wanted to win,” admitted the the 15 year old who has already got 2 wins to his name but lost the battle for 3rd in the Cup table to Quiles.

“I had the points lead and a strategy this weekend and it worked. I knew that as long as I ran behind Collin I would take the Cup. Especially today it made sense just to follow that.”

“It’s been an incredible year and result for my family and all those who support me. It is very special, to be the first rider to win the Junior World Championship and the Rookies Cup, I could not wish for a better season.”

Veijer had nothing more to give

“I tried my best, in this race I didn’t have anything to lose. I didn’t want to crash for sure but if I crashed it wouldn’t matter a lot but still I wanted to finish.”

“I tried everything but I am tall and I just could’t get enough of a slipstream to get with the guys and though I rode hard everywhere it just wasn’t possible to get to the front.”

“Some passed me and I tried to slipstream them but even with a better corner exit I couldn’t do it. I’m a bit disappointed but it is what it is, you have to deal with it.”

“At one point I braked so late I had some trouble with the front and I knew I was on the limit. I did what I could and I just knew Jose was there. Brilliant for him, he did an incredible season and I am happy with mine as well.”

Lunetta on the podium again.

“It is great to be on the podium again. I really tried to win again but today it was harder, the pace seemed quicker. I tried every lap I was more on the limit, I tried everything but was losing a bit in Turn 6 and Turn 8 but making it up in other places so the gap would close and grow.”

“It’s been an incredible 3 years in Rookies Cup I just wish I could do it all again.”

Marcos Ruda led a Rookies Cup race for the first time and the 17-year-old Spaniard finally finished 4th. “It was an incredible race for me, finally I could race at the front. It has been such a tough year, I battled and battled, at first it was not working but I kept trying and finally it started to come together in the 2nd half and I really enjoyed this weekend, especially the race today.”