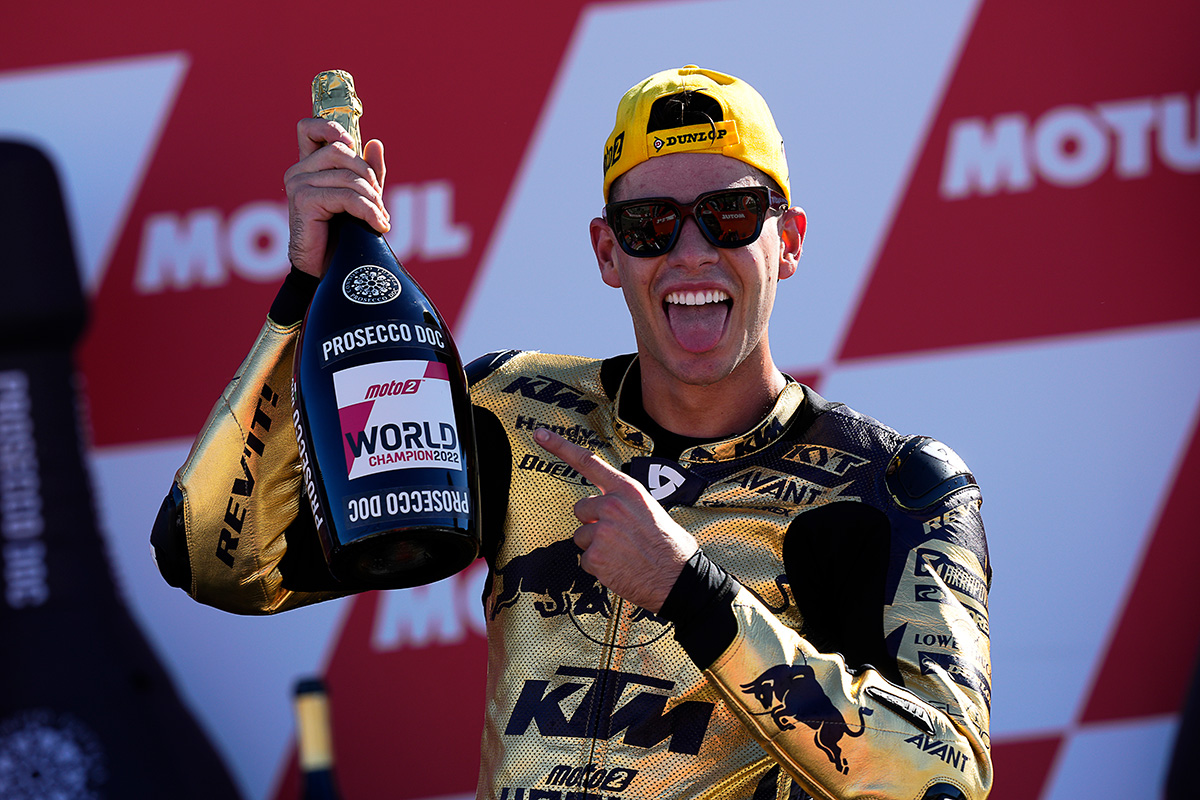 Augusto Fernandez (Red Bull KTM Ajo) is the 2022 Moto2™ World Champion! After a dramatic finale at the Gran Premio Motul de la Comunitat Valenciana that saw sole remaining rival Ai Ogura (Idemitsu Honda Team Asia) crash out, the Spaniard was already Champion before the flag – and came through to take second and secure the crown in style with a podium.

Augusto won the European Junior Cup in 2014 and competed in Superstock 600 thereafter, where he achieved a victory in 2015. He was fifth in the Moto2™ European Championship the following year as he moved onto new machinery, and he started the next season with a podium. That year, 2017, also saw Augusto called up to make his Grand Prix debut at the 2017 Italian GP with Speed Up.

Despite scoring points, he initially didn’t get a ride in the Grand Prix paddock for 2018 and returned to European level but not long after, everything changed. Looking for a rider mid-season, the Pons Moto2™ squad picked Augusto to return to the World Championship and he didn’t disappoint, starting to bank top eight and top ten performances.

2019 was a huge turning point. Despite some injury struggles early in the year with a broken wrist, Augusto was back with a bang as he returned at Jerez and took his first Grand Prix podium. Another followed at Le Mans before a first Grand Prix victory at the classic TT Circuit Assen, backed up by two more at Silverstone and Misano. His title challenge faded towards the end of the season and 2020 proved a more difficult year with no podiums, but Augusto worked his way back towards the front in 2021, returning to the rostrum by Assen and ending the year fifth overall to sign off from Elf Marc VDS Racing Team.

In new colours with Red Bull KTM Ajo, 2022 didn’t get off to the perfect start as Augusto didn’t visit the podium until Le Mans, but that was a win and the eventual Champion was back in the groove. A second podium at Catalunya then prefaced three wins in a row as Augusto began his title assault in earnest, and his form remained consistent to the end of the season barring one mistake at Phillip Island. At the time potentially pivotal, a fourth place next time out at Sepang as rival Ogura crashed out saw the number 37 regain the lead and arrive into the season finale as the rider ahead – by 9.5 points.

In a tense final showdown, both Augusto and Ogura were fighting it out in the front positions before the Japanese rider slid out – guaranteeing Augusto the Championship. Pressure off, the number 37 then chased teammate and Rookie of the Year Pedro Acosta home, within six tenths at the start of the final lap and taking a ninth podium of the season to celebrate the crown in style.

“It’s been an amazing year. I really enjoyed the race after the first laps. Honestly today I felt the pressure out there on the first laps, and a bit of frustration because I knew I had more speed but I was being too careful. I saw the fight between Alonso and Pedro and knew they were fighting for Rookie of the Year, they were fighting hard. It was hard to pass them. I knew it was enough, but risky. But I knew I had more pace than everyone except maybe Pedro.

“I’m sorry for Ai and his crash, he was pushing hard, but after that I forgot about everything, I did my race and pace. Just tried to finished the season with a win and I went for it. Pedro was super fast in practice, like me, but with a bit extra. I’m happy with the race because I pushed to the end and I tried to push him to the last corner. It was an awesome race and I’m super happy for him also to get the Rookie, and for the team to win the teams’.

“In Australia we were so close to having a good chance for the rest of the races, the season, and for me it was also tough in Malaysia. On Sunday, during the race, it was my hardest because in Australia ok it’s my fault but I still have chances, nothing lost and only a few points with two races to fight again. But in Malaysia where he was fighting for the win and I was struggling to get into the top five, I think that was my longest and toughest race of the year.

“I’m proud of how we, as a family, got to here. My ‘strange’ career, my way to the World Championship and then to securing my place here. Every step. And the bad years, after 2019 when we’d been super competitive before two bad years. But I’m the rider I am today because of those bad years too, there’s nothing to regret. I’m just proud of my family, myself and everything.”

#ValenciaGP, world champion
Get All Our Latest News Sent Direct To Your Inbox
Join 30,292 other subscribers.
Follow on Social Media
Get the VROOM Podcast