Brad Binder 2nd and Miguel Oliveira 5th in the #ValenciaGP 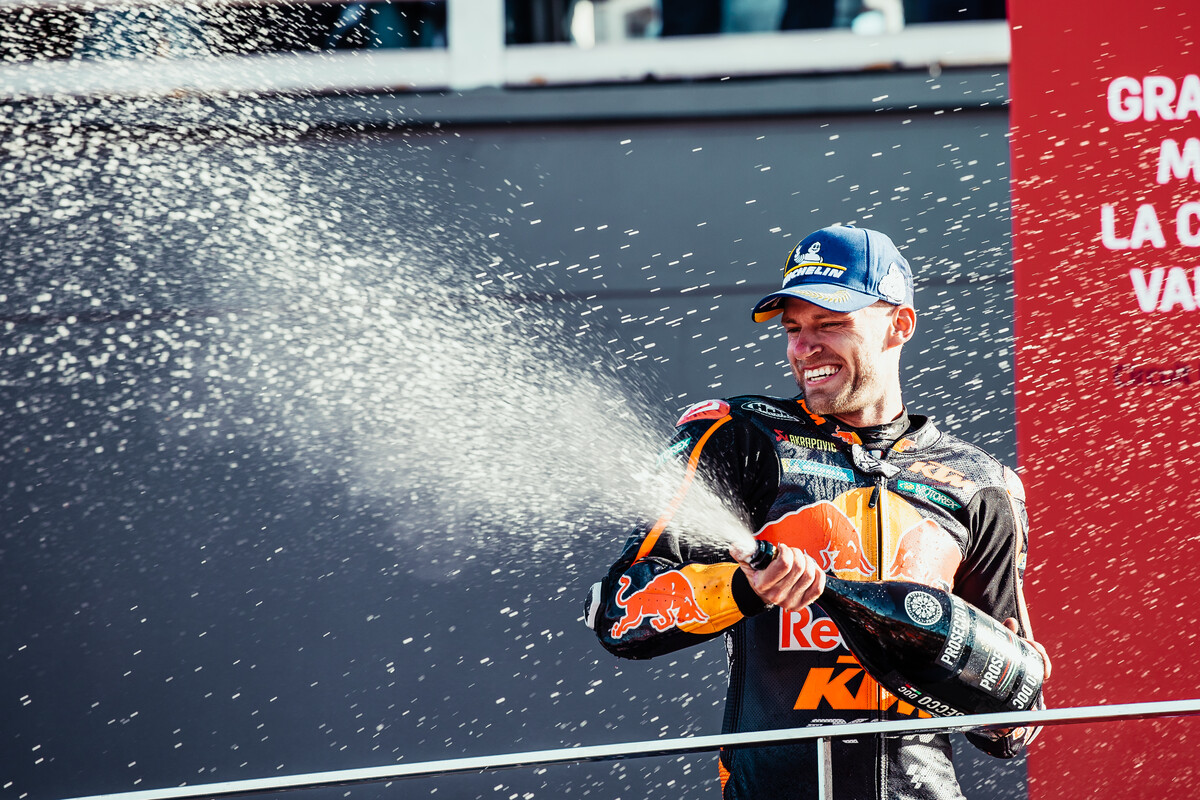 The compact and curling Circuito Ricardo Tormo near Valencia in eastern Spain was an ideal stage for the final date on the 2022 MotoGP calendar: bright sunshine, decent autumnal temperatures and a mass of 92,000 fans and spectators created a vibrant atmosphere for round twenty of twenty.

Red Bull KTM Factory Racing were competing at a venue that held significance in their short but bright MotoGP story so far. Valencia was the site of their very first outing in the premier class in 2016 and the scene of their first podium finish in 2018. Brad Binder and Miguel Oliveira showed competitive one-lap speed and decent race pace respectively through practice and qualification: the South African starting from the top of the third row in 7th while the Portuguese was 14th.

MotoGP rattled through 27 laps where the first seven riders were split by eight seconds and five retired from the running. Tire conservation and careful overtaking were essential ingredients among a field with a lot of parity with race times and Binder expertly moved from the depths of the top ten to split the tussle for the podium. The South African was brilliant as he passed Fabio Quartararo, Jack Miller and then Jorge Martin to reach 2nd place and then just run out of time to catch winner Alex Rins. The gap was less than four tenths of a second at the finish line and meant that Binder ends 2022 as he begun – on the second step of the rostrum.

Miguel Oliveira was equally as prolific with his speed. His climb from P14 to defeat 2020 world champion Joan Mir permitted his fifth top five entry this year and allows 10th in the championship.

With 337 points, Red Bull KTM Factory Racing have ranked 2nd from the 12 teams in the MotoGP championship.

Valencia marked the culmination of the four-year adventure for KTM with the Tech3 team. The renowned squad has helped develop a number of names in that period and the highlight was undoubtedly Oliveira’s two wins in Tech3 colors during the 2020 campaign. The two MotoGP rookies in Remy Gardner and Raul Fernandez were finally able to round-off a challenging but educational term with the Spaniard taking 12th for 22nd in the final list (with six points scores) while the Australian crossed the line in 13th, to rest 23rd for 2022.

The MotoGP paddock will barely pause for respite as 2023 spec machinery and ideas for next season will be prepped on Monday for the first ‘pre-season’ test at Valencia on Tuesday. The 74th year of world championship racing begins with the Grand Prix of Portugal at the Algarve International Circuit on March 24th-26th 2023.

Brad Binder:
“Really happy to be back on the podium. This weekend I came with the mindset I had to win and it didn’t quite work out but Alex [Rins] rode really well today. I have to take my hat off to the team, I have the most amazing crew behind me. There are some crazy and incredible people at KTM. We’ve had some great times this season and some really hard times too but we have always managed to give our absolute best come race day. It’s good to be top six in the championship, for sure, and to get the team up to 2nd in the standings as well. We made a step this weekend because I had been requesting some more drive grip and the guys brought it for this race. I really hope for the 2023 season we can find that last little bit to be competitive every weekend. We fought hard today and made some moves. Let’s see what Tuesday brings us.”

Miguel Oliveira:
“A good weekend and our pace throughout was incredible. We had the potential to finish on the podium but we started too far back and we fought tire pressure and the challenges we all know about. Anyway, it was a positive way to end the season – with a top five – and it’s done now. Everyone enjoyed it in the garage and that was the main thing. 10th in the championship wasn’t the goal and we could quite reach 8th. Mixed feelings that my KTM chapter is ending and I will start a new one. There have been ups-and-downs but that is part of our journey together and I know I gave everything I had. I leave with good feelings.”