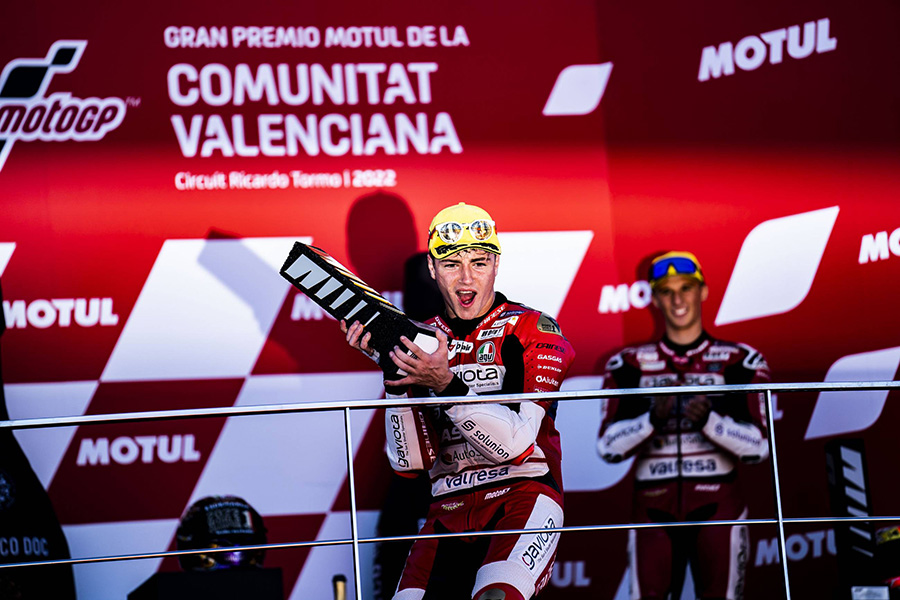 Valresa GASGAS Aspar riders have achieved the aims they had set for the end of the season. On the one hand, Izan Guevara has achieved the victory in Valencia, winning all four races in Spain. In addition, the Spanish rider has achieved another of his goals, to exceed 300 points in the overall standings. Finally, the Valresa GASGAS Aspar rider has reached 319 points. On the other hand, Sergio García Dols has been proclaimed World Championship runner-up after finishing third in today’s race. The Spanish rider finished the season 11 and 19 points ahead of his main rivals for the runner-up spot, Dennis Foggia and Ayumu Sasaki. Sergio García leaves the team and the category with good feelings after a historic double for Valresa GASGAS Aspar.

Today’s race at the Ricardo Tormo Circuit was a thrilling one. Izan Guevara set a pace that only Deniz Öncü was able to follow. Both riders have distanced themselves from the rest and have fought face to face for the victory. Izan Guevara led the race from the traffic lights until the last lap, when the Turkish rider overtook the Spaniard. However, Guevara was quick to hit back and crossed the finish line in first position. Sergio García Dols held on to third place after fighting with Ivan Ortolá at the beginning. With twelve laps to go, Sergio García managed to get away and cross the finish line with a difference of 7 seconds. Filippo Farioli gained one position from the start and finished nineteenth in his first race in the Moto3 World Championship. The Italian ends a season in which he finished third in the JuniorGP.

WINNER Izan Guevara:
“It was an amazing feeling in the race. I think we had incredible pace alone at the front. I pushed really fast in the final laps, and it was incredible to battle to the finish. I want to say a big thanks to my team for their work throughout the whole season. I’ve now won all four races in Spain – as well as the championship – which is just an amazing way to finish my time in the Moto3 class. A perfect race today, and now I will just enjoy the time with my family and team! Thankyou!”

3rd Sergio García (+6.557):
“The feeling today is incredible – second in the world championship! I’m really happy with that! The race itself was really fast, and today I pushed as hard as I could, but I didn’t have any more to give. I’m happy for my family and all the people that come to support us. A big big thankyou to everyone, my team, and especially my father who is always there.”

19th Filippo Farioli (+29.402):
“It was a positive and really tough race. The pace was very fast and strong. I managed to set a time of 1:38.8, one second off the track record. It was a race where I fought for the points until the end, but a contact with another rider with a few laps to go prevented me from getting there. I’m very happy, it’s been an incredible season and I want to thank Aspar Team for all they’ve helped me this season.”