NOT the MotoGP News – #BritishGP 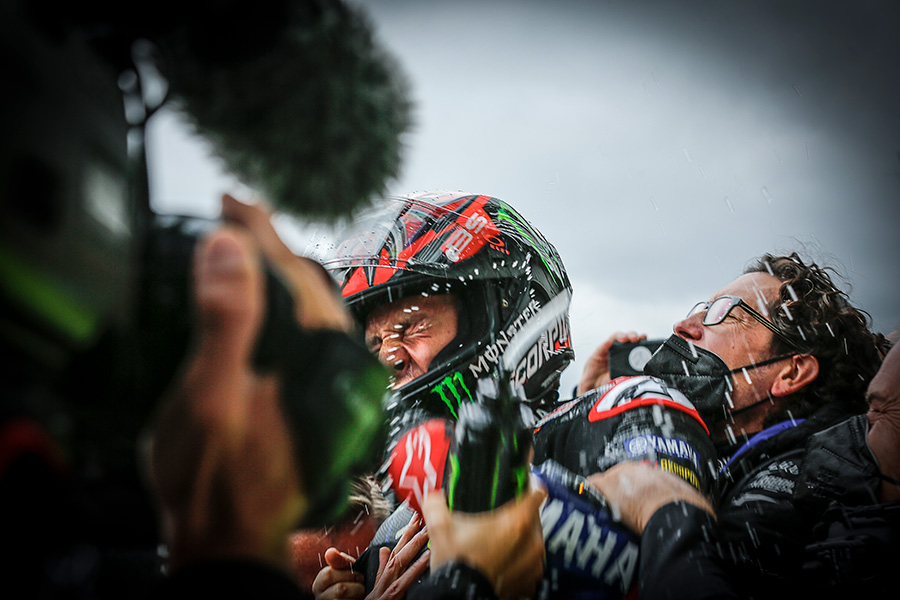 A special “Home GP” edition of NOT the MotoGP News, courtesy of Guy – who you can/should follow on Twitter by clicking here.

Well, the editor has finally released us from the bunker after 2 years. Double-jabbed and we’ve been vaccinated too (that’s a joke for all the pugilists out there). Gareth lets us out every time the MotoGP thing comes to England. He says it’s a reward for being loyal. Or something.

Ok, and now for something serious. Covid. The really nice people at Silverstone wrote to us and offered us press accreditation if we filled in some paperwork about the Eds web site. The Ed kindly sent us the info we needed, and we sent it off to a very nice lady at Silverstone. Another nice lady at Dorma emailed us and said we’d be accredited so long as we filled in some Covid testing paperwork and followed their protocols. Ok, we thought let’s had a look and a think. Links to their website where we should load our Covid test results. Screenshots on how to do this. Passwords and usernames with various access levels (we were labelled as some sort of “coordinator”). No leaving the media centre. At all. No face-to-face interviews. No mixing in large groups. No wandering the paddock. This was serious stuff we thought. And then you realise these riders, mechanics, managers and in fact everyone in the bubble are hanging on desperately trying to stay safe. Going from circuit to circuit trying not to catch Covid so their chances of a championship point isn’t wrecked by a two-bit keyboard writer. And that hit us. What in the name of all things sacred is a press pass worth when that’s on the line. Whilst trying not to kill themselves at 170mph-plus. Well, we weren’t going to meet them so that doesn’t matter. But what if we accidentally took Covid into the media centre though? There’s proper journalists in there we could infect and screw up their livelihoods. For once we were thoughtful. And mature. And serious. So, we said thanks, but no thanks. Serious stuff ends.

But does that mean we didn’t go? Of course, it doesn’t! We went trackside. Well, stand side if you get our drift. Named after a great Saint in Canterbury, we got tickets for Becketts. Which was grand. It’s been a few years since we’d done this, and we were keen to see how much had changed. Well, there’s an awful lot of walking to do, especially if you park on the opposite side of the circuit to the grandstand. Right, we arrived nice and early, so a brisk walked past lots of un-open stands, and after slogging through the previous track tarmac that was ripped up and laid as paths we reached London. Well not quite, but Silverstone is big. You could drop 4 Doningtons in the middle and still have room for more. And that’s the point. Donington might be ok as a track but it’s limited by its boundaries for expansion. And it’s not as fast as Silverstone either, so there.

After this season finishes, thousands of Rossi fans will cry. Thousands of gallons of bright lurid yellow dye will be poured away. T-shirts will remain unprinted and at long last the god-awful wigs will be consigned to the bin. So much single-use plastic will now pollute the rivers and oceans for ever. A bit like a tiny percentage of Rossi fans. And at Silverstone, there was only one rider’s merchandise to be seen: yep Andrea Iannone’s. (Not really – it was Rossi’s obviously).

From Becketts’s (you sure that’s right? – Ed) we could see loads. Except the really rubbish “large” screen put up across the way for us to follow the racing after it had swept past. The picture quality had all the refinement of gran’s massive CRT TV from the 70s. And the tannoy speakers were so tinny that even bats had their fingers in their ears. Anyway, back to the view; look right and wait for the spectacle to race into view after hearing the roar. It’s been a while and wow! That’s visceral. And BRIGHT! Quite noisy too. But you know all that. As they flip-flop through Maggots, Becketts and Chapel onto Hangar, the sheer pleasure from the grandstand was just plainly humbling. Fans, real fans, sat in the cold, with their kids and wives, or girlfriends, or just their mates of 20, 30 years, just cheering and clapping. The mad, mad relief of seeing their heroes for real. Not on a TV screen in a warm lounge. But sat 40 feet up, having shelled out a massive wedge whilst possibly on furlough.

The bonhomie lasted less than a lap when arch Rossi rival (not really though is he?) Marcie Marc Marquez took ultra-impressive novice Jorge Martin out. And himself. And the muppets amongst did cheer. Hurry up and fuck off eh?

That put some kibosh on the race for a little while until Quat showed how classy he is and how much he reminds us of Lorenzo. Behind him Rins played his Silverstone joker (he loves this place), and the Asparagus brothers treated us to performances worthy of the price of admission alone. Rossi, Mir and Bagnaia had nightmares with underperforming tyres. Miller had fun. As did Dixon we hope. It must have been both terrifying and wonderful to be on a MotoGP bike in front of your home crowd. Well done fella.

The result was pretty much decided with 2/3rds of the race run. Quat was the rightful winner in our opinion. And Rins and Aleix deserved the remaining podium places.

Rossi. His last British race. And in some respects, thank god. Thank god because he has his fitness. Thank god because he’s on a satellite bike and isn’t going to win. And thank god because now some of the idiots will leave. But as he pulled up under Becketts’s grandstand we did get a small lump in our throat. The yellow flares, the wild adulation, the cheering, the applause was all there. And in return a nod of the head and a wave of the hand was all they needed.

#BritishGP, fun, humour
Get All Our Latest News Sent Direct To Your Inbox
Join 30,292 other subscribers.
Follow on Social Media
Get the VROOM Podcast