NOT the MotoGP News: #AndaluciaGP – “Return of the Mack… Almost” 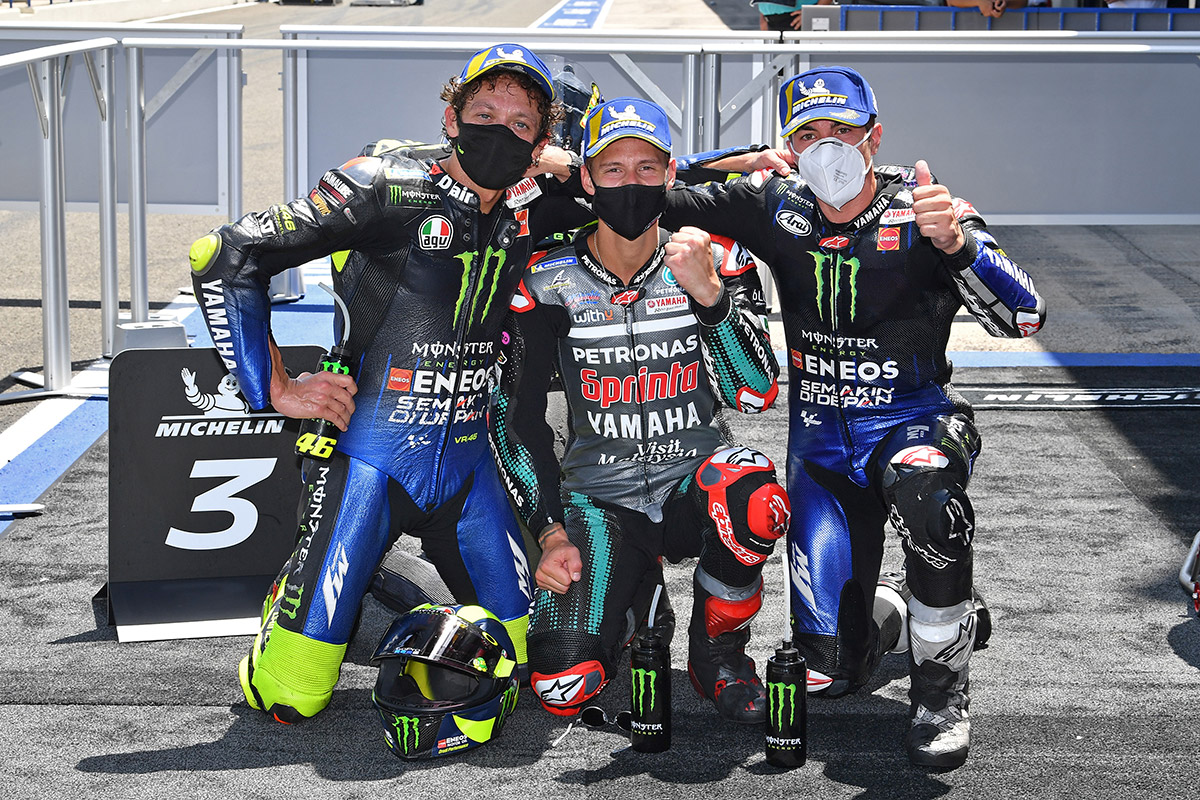 We were going to do a joke about déjà vu, but you’ve probably heard it. Anywho, Jerez again. But like a rubbish golf player with a crap stroke, we’re back in the bunker. The Ed says it keeps us out of the sun, and heat and all that sort of stuff, but we think he’s wrong. We’d love to be trackside mixing it with no one else. As we’d been at Jerez just last week, you know what it’s like. Sandy, sunny, as hot as a tyre warmer with a twisty awkward, but ace, track along with a finish-line totally obscured by a fecking great big UFO in homage to ET. For the love of all things that are sacred; why do that?

After all of last week’s excitement, we were worried this week wouldn’t be as good. With the exception of Moto2 which we just knew wouldn’t be.

Moto3 is that thing isn’t it? That amazing glimpse of excitement; seeing someone who you fall in love with at first sight; trying something illegal for the very first time; taking a risk and not just surviving, but loving it. Yep, Moto3 has it all in spades. Twenty two laps of intensity. Fenati was 21st on the grid and Darren Binder was 25th. By the way, it was hot. Really hot. Hotter than last week. And just like last week, Suzuki got away like the proverbial and John McPhee did just like he did at the start last week; slide backwards.

Within a lap Binder was 15th. Was he going to do the same as last week? Well yes and no. By lap three he’d two consecutive fastest laps to his name. and all the while an awful lot of usual suspects were at the front: Arenas, Suzuki, Fernandez, Rodrigo, McPhee, Ogura, Masia were all fighting tooth and claw for the slightest chance of a break.

We had to wait until lap 9 for the mess to start. Ogura and Masia out of the race at Turn 9. Eight laps later Bert Arenas had a mother of big offs at Turn 11 and after winning two races on the bounce, bounced out for zero points. By lap 18 Binder the Daft had fought his way to 3rd. That’s impressive and yet just a little reckless – making every other rider look sane.

Two laps later and BT Spurt dragged out a comment about McPhee and race craft. That’s it, we thought – game over. We were proven wrong yet again….. Suzuki took the win from John McPhee in second and the top five covered by less than 0.9secs. But eight non-finishers. Ouch.

We were as high as kites and nothing was going to bring us down……!

Tesco Rafkin didn’t/couldn’t make the start line. Something about home deliveries. And for the second race in a day, the Brit got a bad start. Well Brits actually. Sam Lowes slipped back á la McPhee and Jake Dixon fell off at turn 6, lap 3. Oh dear. It’s a short season and maybe that’s a blessing in disguise. By the fourth lap Daniel was leaving on a plane tonight; no hang on, that’s an Elton John song. He crashed and his bike caught fire. That was it. Actually whilst Bastardsurnametospell was legging it off into the distance at the front, lots of others (some who should know better) were falling off. The heat was going to cop a lot of the blame whether it was at fault or not.

Just like last week, it all got strung out; the front four were strung out, with just a tantalising chance of catching the rider in front, and so no one was really entertained. We even suspect no one over tried in case they fell. Sensible. Bastardsurnametospell took victory by over 2 seconds. But was that it? Nooooooo…… cool-down lap had Marini and Bez knocking each other off in a tangle of handlebars at 20mph.

So Marc came, he tried, he left. Kudos.

Fabio the Groove-Rider conquered. Pole to chequered flag. All Frenchmen are immeasurably cool. But some are like Zarco. Fabio isn’t. Rossi (remember him last week?) slipped into 2nd place early doors. What? It wasn’t to last but the 41 year old looked refreshed and different. Viñales didn’t – he looked panicky, but by lap 5 Rossi was holding Viñales, Bagnaia and Miller up. Yep; the two Pramacs where miles ahead of Dovi and the former adult film star look-a-like (Petrucci).

As Fabio pulled away its worth remembering that Alex Marquez was doing a stellar job of making Lorenzo’s performance on a Repsol look amazing.

And then for MotoGP the falls began. 60°c track temperature meant it was slipperier than a jar of greased eels. Lecuona went on lap 6, Aleix on lap 9 and sadly for Pramac, Miller went on lap11. Petrucci on lap 12. On the same lap Bagnaia passed Rossi and started to gap him using the Ducati hyper-drive. A lap later Frankly Morbid-deli passed Rossi and the other factory Yamaha slipped back. Ominous. On that same lap 13 Brad binned her badly. Ouch.

For passing Rossi, Franky’s engine let go on lap 17. Talk about sealed-in sensors and M1 engine reliability got serious. Two laps later Uccio’s voodoo doll of Bagnaia fell off Uccio’s lap and Bagnaia’s Ducati had “an electronics fault” i.e., it blew up. Meanwhile Fabio was out by himself whistling La Marseillaise. He had enough lead to have probably stopped and conducted a whole orchestra. One lap to go and the TopGun took the old fella Rossi for second. Deep joy all round for Yamaha with a 1-2-3.

#AndaluciaGP, fun, humour
Get All Our Latest News Sent Direct To Your Inbox
Join 30,292 other subscribers.
Follow on Social Media
Get the VROOM Podcast