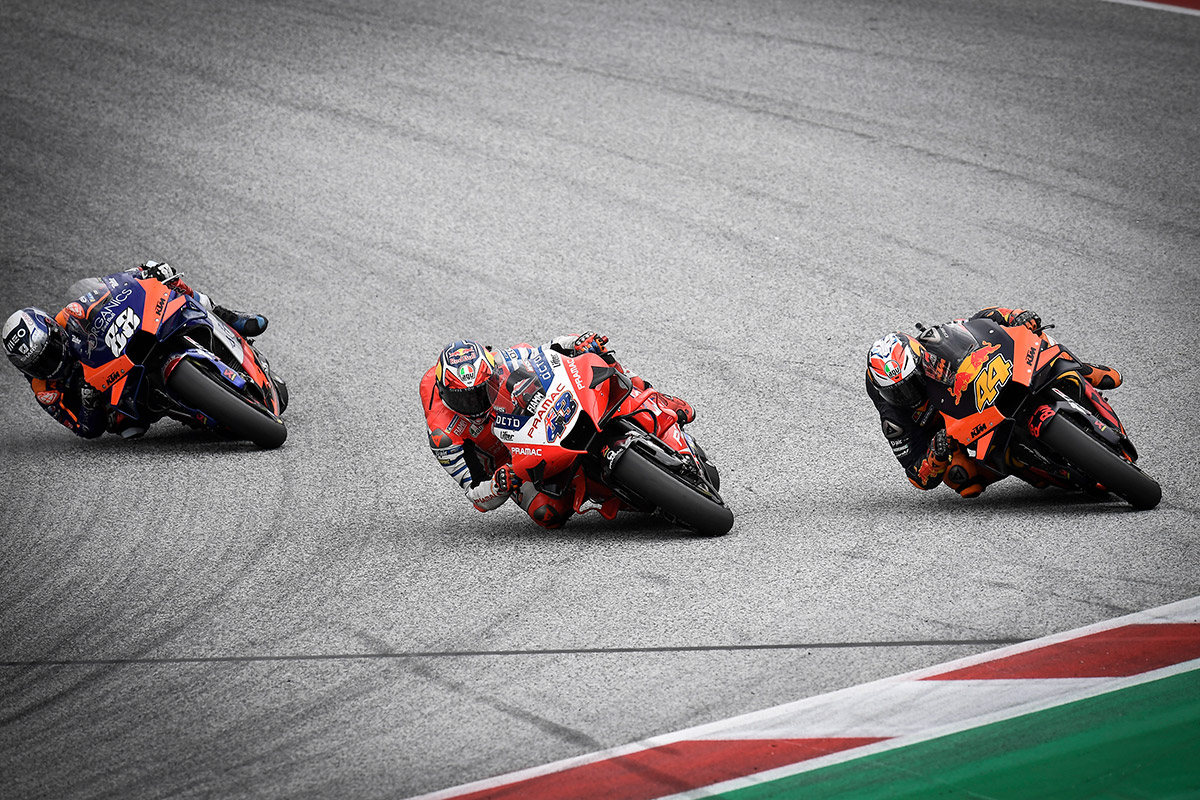 The latest from our blogger Guy Anderson on a day of drama at the Red Bull Ring… You know I’m sure we wrote that intro last week…?

Oh hi….. yeah, we’re still here. You know, like that Groundhog Day thang. Styria; more than just a bad hand at a game of Scrabble. But anyway, racing………

Moto3: Rodrigo had pole and we all know it mattered not one jot for the outcome of the race. No matter how repetitive a Moto3 race is, it is always fun, fun, fun. Arbolino took one look at Rodrigo and took the lead on lap 1. See? Matters not un jot. Same goes for a group making a break at the front early doors. Meaningless. Bloody entertaining though.

One thing did make us sit up a little: Bert Arenas was 8th. Unusual, but not worrying. Darren Binder is worrying. At any point of a race. And at any position. Feral is the right word we reckon.

By lap 10 Brit hope, John McPhee, hit the lead. BTSpurt as ever got carried away. And within half a lap he was third. That’s the way it is in Moto3. Strategy? Well….. as Mike Tyson once said, “Everyone has a plan until they get punched in the mouth.” In other words, there is no strategy. Take an opportunity, make a gap, curse a pass on you, re-group, try again. Repeat until chequered flag. Or until your ambition outweighs your talent, and off you slide. Which is what a few Moto3 riders do every race. Alcoba, lap 14 turn 3. Lap 19 Turn 1, Öncü and Sasaki. Then McPhee at Turn 10.

Sometimes Moto3 is just lottery and today was that lottery. Vietti won, followed by Arbolino in second and Ogura third. Bert? 5th. And still in control of the championship.

Moto2 and Aron Canet’s moustache was on pole. Boy that’s a brave addition to a top lip. Slug-like. Jorge Martin shot a whole fox or something and took the lead. Whilst Fernandez didn’t last the whole lap and fell at turn 10. By the second lap we had typical Moto2 service with the front three stretched already. And then Canet’s moustache made it even more stretched out by falling off at turn 4 on the second lap. This let Gardener into a podium place in third.

And then on the next lap Lowes got totally out of position, and out of control, and took out Chantra plus Navarro at turn 3. Boy, that corner has seen more action than a hooker offering buy one, get one free. Lowes remounted, fell off and was black flagged too. That’s some collection there.

Whilst all that was happening, Bez was moving along just fine. Into third, then second passing Remy G, and with two laps to go, started to put Jorge Martin under all sorts of pressure. But Martin held on for the win. Except he didn’t. Race Direction thought Martin was too handsome to win. You can’t have that chiselled look and be good at winning. So, they decided he infringed the track limits and demoted him a place. We could smell that decision from here.

MotoGP couldn’t be as eventful as last week, we knew that. Pol was on pole and if only he’d been Polish we’d have had a pun. Zarco was in the pits but chewing up the scenery in a French existentialist way. Probably while smoking Gauloises. Obviously the Austrian marshal wasn’t a fan, for after the lights went out the marshal kept Zarco waiting. And waiting.

Miller hit the lead, Mir hit 2nd and Naka-origami was third. Mir and Miller fought tooth and nail for the lead, with Mir the Spaceship holding the advantage. These three looked good and looked like the likely podium places.

That was until Brembo decided to have a dicky-fit. Well the M1 of Viñales did. Somehow Mav’s brakes went on holiday half a race too soon. Whilst Mav was hurtling along the finish straight at stupid mph. He did the only thing possible and bailed off approaching Turn 1. The resulting impact of the M1 totalled the air fence, so out came the red flag. That meant a 12-lap sprint.

And the second, proper race was awesome. Mir, Miller and Pol Asparagus knocked seven bells of thingy off each other. Proper proper racing. Oh, and Johan Zarco was taking zero prisoners either further down the positions. By lap 6, Mir’s tyres were knackered (we have no idea if his knackers were tired – thank you John Cooper Clarke). Pol got onto Miller with 5 to go and one of these guys was going to win. Oliveira was third. Binder went straight on at turn 1 on lap 8 and Dovi was fourth by lap 9. Looking at our notes, we’ve noticed that we scribbled, “We need nut jobs like Pol to win.” Ah. We may have jinxed it. Last corner and Pol and Jack went incredibly wide giving Oliveira the win! For Tech-3! You know, Herve and Guy and the other guy who make up the “3” bit. A SATELLITE TEAM WON! Bloody brilliant. Plus no sign of Puig! What more could you want.

By the way, Jake Dixon did good in Moto2. As ever, we know nothing.

[*The headline is a reference to lyrics from the album Tormato by ancient progressive rock group Yes, in a barely disguised attempt to curry favour with the editor. Which worked perfectly. Thank you Guy. Ed]

#StyrianGP, fun, humour
Get All Our Latest News Sent Direct To Your Inbox
Follow on Social Media
Get the VROOM Podcast