NOT the MotoGP News: #SanMarinoGP – No, You Can’t Always Get What You Want… 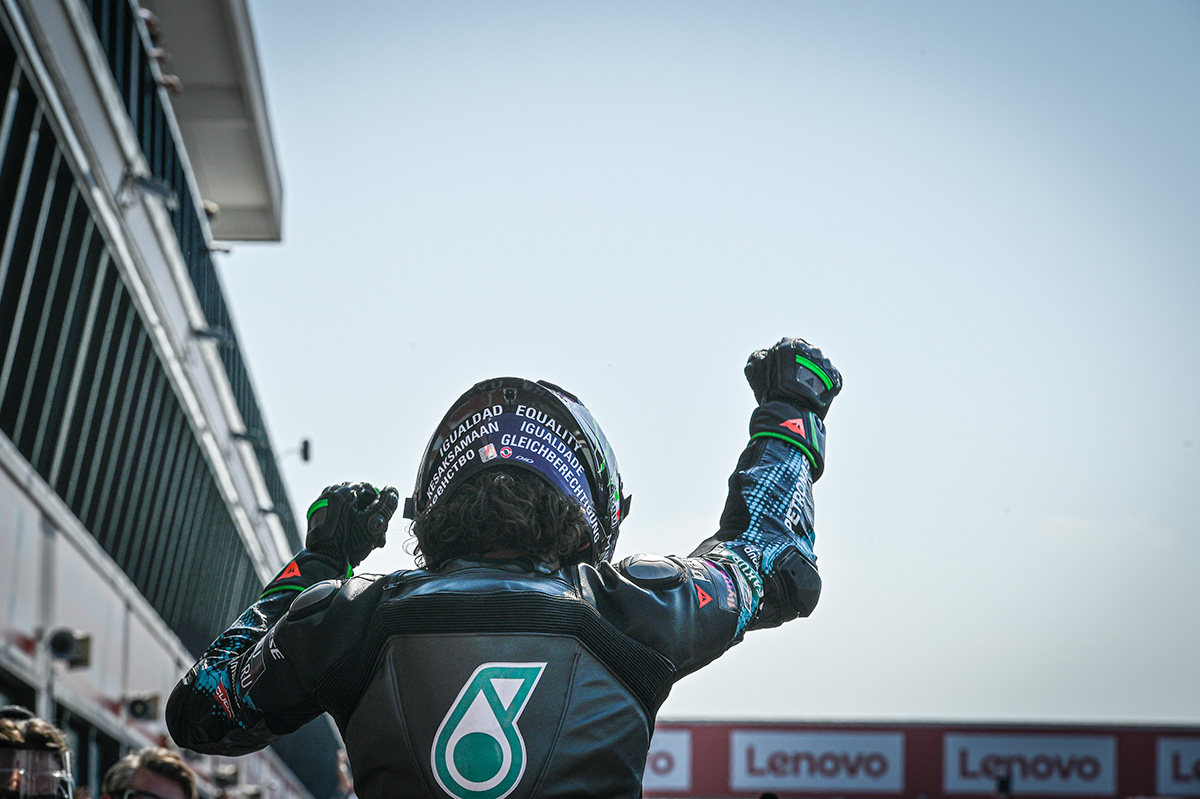 No, You Can’t Always Get What You Want…
But if you try sometime you find
You get what you need

Oh sweet Rimini on the sea, look what you did to me.

Yep! It’s back, we’re back (sorry) and didn’t those three weeks seem like an age. Bunkersville is ace; the Ed tells us this because its free from Covid unlike poor old Jorge Martin. For once, and trying to sound sincere, we all in the bunker wish the chap the best recovery (is he the one with the hot girlfriend?).

Sharper than our Ed, Moto3 sparkles like a diamond in a sea of turds. Never failing to entertain, those 3 weeks of cold turkey hurt more than trying to get off heroin. But just like weak willed addicts, we waited for our fix in pure unadulterated excitement (What are you waffling on about again? – Ed).

Ogura had pole (for what it was worth), Bert Arenas was 13th and Nanny McPhee was down in 17th. Even Qualifying is as random as Marc Marquez’s doctors’ opinions! And Fenati was 5th. What the heck? Imagine having Max Biaggi as your team manager when you’re as feisty as Romano. A match made in purgatory.

Talking of which, Lap 1 and three off at Turn 4 – Fernandez, Garcia and Vietti, for which after the race, Garcia has copped an LLP at the next race (here in Rimini next week). Ever faithful, like that three-legged dog that breaks your heart Binder slugged it up from 19th to the front group in X number of laps (i.e. pretty quickly). Rodrigo tried to gap, but what really was the point? A rush of adrenaline to the head? It was never going to work.

Lap 7 and Sasaki and Lopez were off at Turn 8. Lopez too copped an after-race sanction for his indiscretion of causing the accident. Binder moved into second. Ominous. McPhee was up to 8th then down to 14th then up to 10th; you get the idea; chaotic strategic race. By Lap 13 we’d made a note saying only Binder and Rodrigo were consistent. Wrong!

Two laps later and Darren binned her (really? You’re still going to use that? – Ed). Yep. You could probably put your house on it to happen 6 or 7 times a season. Turn 6 by the way. McPhee slid up to 4th and then 2nd. And then Bert Arenas slid off on the worst ripples this side of a stormy sea, on Lap 20 at Turn 3. Blimey O’Reilly! No one expected that. McPhee pretty much controlled the front on the last lap although it was close. From 17th to win. Nice one.

And with the mathematical certainty that Moto2 follows Moto3, next up was Moto2*.

Rimini lay-about Luca Marini was on pole alongside teammate Bez. Sam Lowes would have been on pole as he’d set the fastest time in Qually and nabbed a Tissot for his efforts. Except he’d skittled a few at Austria 3 weeks back when he had a) a mechanical malfunction b) hit a false neutral or c) had brain-fade. So, Race Direction made him start from pit lane. Painful – he’d smoked pole easily. Oh well, spice up yer life eh?

Marini looks the real deal although he must suffer at painful comparisons to his half-bro. Still. Anywho, he rides like a god and legged it within half a lap of the start. Famed Manchester dancer, Bez latched on as best he could (no, you arse, not him! – Ed). Old timers, Luthi and Schrotter turned up at the front of the pack for a while to make us all nostalgic for 250s and 125s……. Get a grip it’s 2020! Newly signed for Ducati, Bastianini slogged it out with Xavi Vierge in a vague attempt to entertain us. Fruitless for most of the time.

Until, that is Marini made a mistake. Only the slightest, not like not wearing a condom for example, but it was enough for Bez to close up and take the fight to him! Hurrah! Showboating, Bez saved an ‘off’ with his elbow a la Marquez (Marc, not the other one) and limpet-like hung on, and then passed Marini. A proper ding-dong then ensued (Christ this stuff must have been stolen from a race report from the 50s – Ed). Excitement and entertainment. A rumble worth watching for at least 5 minutes.

All this, of course, enabled Basti to grab their collective coat tails and haul himself up to the VR46 guys. And on the last lap but one (penultimate you goon – Ed) Bez tripped up and let Basti past. Marini took a stylish victory and Sam Lowes took 8th. Ride of the day? Possibly but Marini and Basti pushed him close for that.

Boom – MotoGP at the backwards circuit and on that new surface Viñales was on pole. My god it’s pointless; we really like Mav especially since he won at Silverstone on a Suzuki way back when, but his head has gone all Lorenzo.

Frankly took the lead and wasn’t headed before the chequered flag. That was worth watching just for that. And so is his integrity and use of a platform like Lewis Hamilton does. We do care about the race, just not as much as that tbh.

Anyway, Rossi slipped into second place behind Frankly and we held thoughts the like which haven’t had an airing since god-knows-when. Could he? Jack was in third and at first we thought he’d mug someone on the last lap, but we were wrong. He slid backwards though the race.

Lap 8 and championship leader Fabio Groove Rider Quat blew a big hole in his title aspirations by falling at Turn 4. He re-joined but panic was writ large across his unseen brow. His day was worse than Viñales, but not by much; Rins slipped past in a masterful manoeuvre at Turns 1 and 2, and Viñales started to hold Mir and Bagnaia up.

At the front Frankly was holding his own and in control; nothing to bother him except his own thoughts and over-excitement about winning his first MotoGP. Not much to worry about then. Rins was all over Rossi with 4 to go whilst Mir followed. But not for long; first Mir passed teammate Rins, and then slid past Rossi like a butter through hot knife. Or something.

Frankly was unstoppable and had the flag with over a 2 second lead. Bagnaia was second and Mir curtailed Rossi taking his 200th podium. Shame, but a great race.

#SanMarinoGP, fun, humour
Get All Our Latest News Sent Direct To Your Inbox
Follow on Social Media
Get the VROOM Podcast